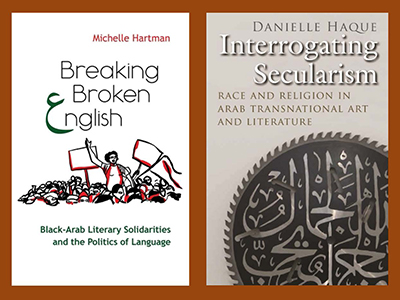 The series is edited by Carol W.N. Fadda, associate professor of English in the College of Arts and Sciences, working with an advisory board of some of the leading scholars in the field of Arab American studies.

“Breaking Broken English: Black-Arab Literary Solidarities and the Politics of Language,” authored by Michelle Hartman (McGill University) explores the historical and current manifestations of Black-Arab political and cultural forms of solidarity, with a specific focus on Arab American literary works that use the English language to enact theories and ideas advanced by Black American thinkers.

“Interrogating Secularism: Race and Religion in Arab Transnational Art and Literature,” authored by Danielle Haque (Minnesota State University, Mankato) is a call to rethink binaries of piety and secularism in contemporary fiction and art through an examination of creative works by and about racialized minorities.

Both books are available for purchase through the Syracuse University Press website.

For more information on the series, visit press.syr.edu/supressbook-series/critical-arab-american-studies/.