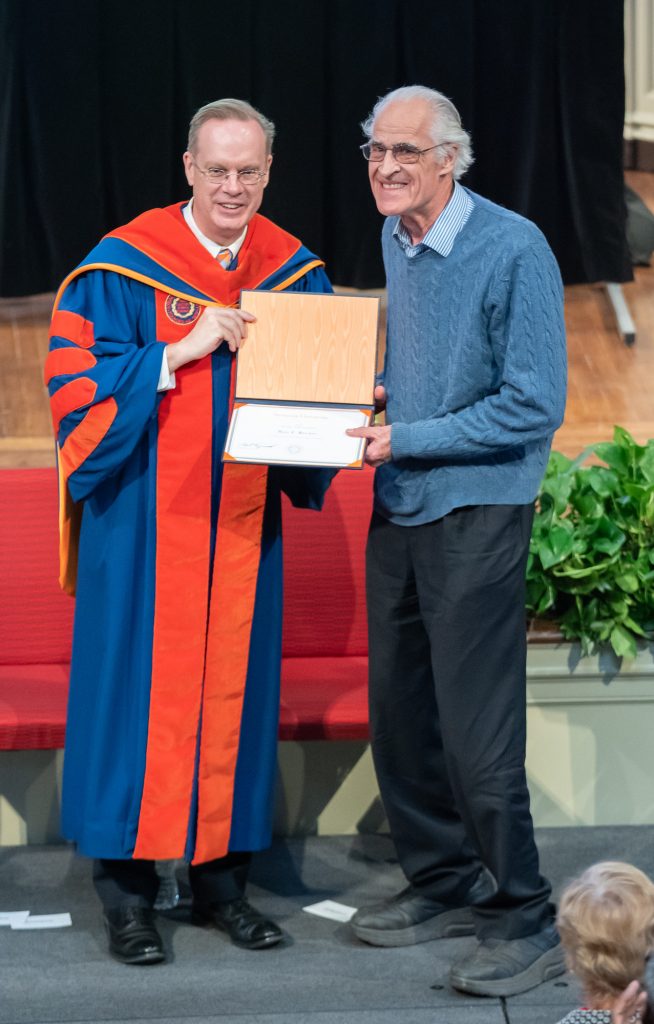 Chancellor Kent Syverud presents Professor Hans Buechler a certificate in recognition of his 50 years teaching at Syracuse University at the One University Awards in Hendricks Chapel.

Hans Buechler is an anthropologist at heart. He is fascinated by people and their stories—where they come from, what they do in their working lives and how it shapes their world view. When Syracuse University honored the Maxwell School anthropology professor for 50 years of service at the One University Awards on April 12, it wasn’t just the VIPs that caught his attention—it was the honoree who approached him at the reception. “I was standing by the food table and started up a conversation with a man who was also being honored for his service,” Buechler says. “He explained that one of his major tasks in his job at the University is to change all the light bulbs, and he’s been doing this for years. It really made this event feel like we are a community, and that was a very nice thing.”

Another guest he was delighted to meet was Harriet Graham, a young woman who congratulated him on his milestone. “She had a lovely accent and said she was a Lockerbie Scholar,” he recalls. “I actually mentioned the next day in my class that I had met a Lockerbie Scholar. I think it’s important for students to know about that connection.” The woman was from Lockerbie, Scotland, where Pan Am 103 fell in 1988. The bombing killed 270 people, including 35 Syracuse University students who were returning from a semester of studying abroad. Each year, two students from Lockerbie are awarded scholarships to study at Syracuse for a year. They return to the United Kingdom to finish their degrees.

Buechler came to the Maxwell School in 1968, when the Vietnam War was raging and American students were embracing activism on campuses across the country. “There were all these demonstrations going on,” he recalls, “and I supported them, as long as they made something out of it.” He finds that today’s students are less interested in activism and more committed to getting good grades. “Probably because their livelihood depends on it more than it used to,” he observes. 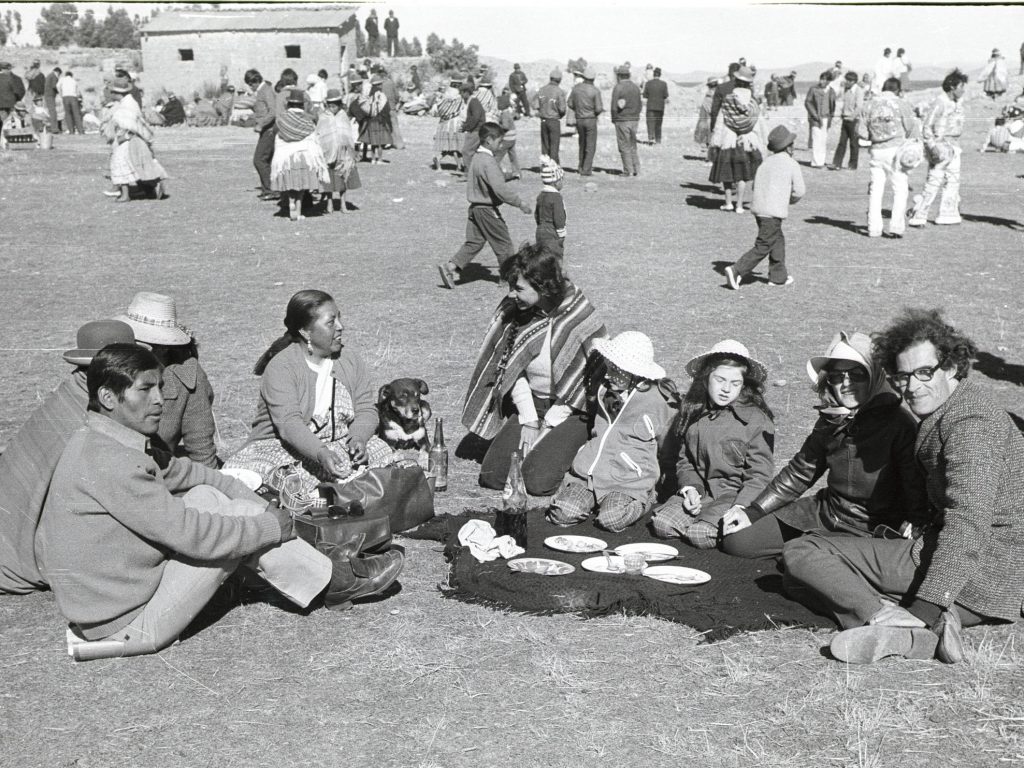 This 1975 photo captures Hans Buechler (right) and his wife Judith-Maria conducting anthropological fieldwork with their twin daughters, Simone and Stephanie, during a fiesta in a rural Bolivian community. Also pictured are members of the Bolivian family the Buechlers researched over three generations.

The social anthropology of Latin America has been a focus of Buechler’s research throughout his career. His late wife, Judith-Maria, was an anthropology professor at Hobart and William Smith Colleges in Geneva, New York. Together, they spent more than four decades immersed in the study of land reform and rural-urban migration in La Paz, Bolivia, and how it affects family, politics and ritual, as well as research in Spain, Eastern Germany and Switzerland. They wrote books, published articles and never tired of working together. Recording family histories was integral to their method, and Buechler continues this research himself, seven years after his wife’s death. He plans to return to Bolivia this summer to continue interviewing and observing the Bolivian family they have followed for three generations.

At 79, Buechler commutes to his classes each day from Geneva, where he maintains the home he shared with his wife. “It’s a lot of driving,” he says of the hour-long trek, “but it’s a time to think. And on the drive home, I always talk to my daughters in Tucson and Chicago.” He takes pride in his family history of twins—his father, daughters and two of his grandchildren are twins.

“It’s hard to live alone,” he says, but his colleagues, field work and rituals bring him comfort. “I stopped watching TV, but I continue the tradition of opening my house up to a group of my wife’s colleagues every other Thursday,” he notes. “I don’t feed them a meal anymore, but I do provide some cheese and crackers.” When asked if sports provides an enjoyable diversion for him, he laughs. “Not at all! I’ve never been to a game.”

Even as the only employee recognized in the 50-year category at this year’s service awards, Buechler seemed surprised by the attention. “They really made an event out of it, and people came up and congratulated me,” he says. He looks forward to a sabbatical next year, but has no plans to retire.

After five decades spent teaching three or more classes each semester, what class does he most enjoy? “Life Histories and Personal Narratives,” he replies.