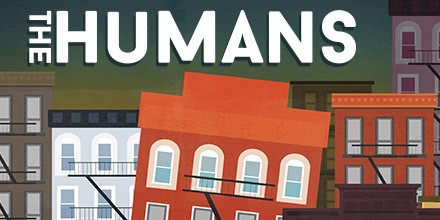 The 2016 Tony Award winner for Best Play is next up at Syracuse Stage. Stephen Karam’s acclaimed comedy/drama “The Humans” runs April 24 to May 12 in the Archbold Theatre, 820 E. Genesee St., Syracuse.

Named Best Play of the Year by numerous media outlets, including the New York Times and National Public Radio, “The Humans” was also a finalist for the 2016 Pulitzer Prize for Drama.

“The Humans” is set at a traditional family Thanksgiving. Erik and Deirdre Blake have traveled from their home in Scranton with Erik’s mother to celebrate with their grown daughters, Aimee and Brigid, at Brigid’s new apartment in New York’s Chinatown. Joining the celebration is Brigid’s boyfriend Richard. Karam deliberately establishes a framework that is easily recognizable.

The Blakes are a multi-generational, contemporary family experiencing tensions and anxieties familiar to today’s middle-class, according to playwright Karam. “What family isn’t dealing with these kinds of things?” he explained. “That’s what multi-generational families are facing all the time. There’s a young person trying to find work or figure out their career. There’s an older person thinking about or planning for retirement. Somebody is sick or dealing with health problems.”

Filtered through the individual members of the Blake family, these personal challenges are tempered by a deep familial bond that throughout the play finds expression in humor. “It’s an Irish family,” explained director Mark Cuddy, who is also artistic director of Rochester’s Geva Theatre Center, “and I’m Irish, so I love the humor in it. I love that they tease each other a lot. I think that sets the whole thing up so when the situation gets a little more dramatic, you have already bought into their connectedness. Even though they can get angry with each other, it’s out of love.”

Karam calls “The Humans” a genre-collision play because he infuses the familiar milieu of family drama with traces of something more sinister borrowed from ghost stories or thrillers. There is a general feeling of unease and the atmosphere is vaguely threatening. There are literal bumps in the night.

“It’s like Alfred Hitchcock meets Arthur Miller,” said Syracuse Stage artistic director Robert Hupp. This fusion of genres allows Karam to interrogate “the way we cope with our biggest fears, the way we process the big existential horrors of life. What if you could find a way to write about this creeping feeling of dread and these existential fears that a lot of us carry as we move through our lives, in a story that actually conjured up the dread and anxiety I was trying to explore? But also make people laugh!”

The degree to which Karam succeeded is reflected in the accolades and awards accorded “The Humans” and in the acclaim it has elicited from reviewers. Writing in The New York Times, Charles Isherwood had high praise for Karam’s originality and overall achievement. “The Humans,” he observed, was “written with a fresh-feeling blend of documentary-like naturalism and theatrical daring. Mr. Karam’s comedy-drama depicts the way we live now with a precision and compassion unmatched by any play I’ve seen in recent years.”