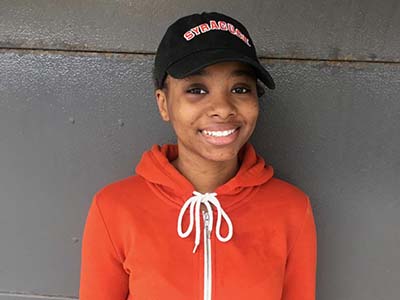 Menifee says that, as a fifth-grader, coming to campus “gave [her] the opportunity to dream.” As she grew up, though, her dream seemed financially unattainable. Still, Menifee’s high school counselor encouraged her to look at Syracuse University as a possibility.

After submitting applications to multiple schools, the furthest—as allowed by her mother—five hours away, Menifee was accepted to Syracuse University and into the Arthur O. Eve Higher Education Opportunity Program. The program, funded by the New York State Department of Education, covers the cost of attendance, giving Menifee the opportunity to enroll at the University. And her mother was happy: Menifee was staying right in Syracuse.

Staying close for college was not just for her mother’s comfort; Menifee believes in keeping local talent in the area. After graduating, she intends to stay in Syracuse.

“Growing up in an impoverished community, you develop a negative stigma associated with the place where you grew up and strive to leave,” says Menifee. “Coming to Syracuse University and staying here after graduation is my way of showing that good things are possible here.”

As Menifee’s first year as a Syracuse student comes to a close, she is excited to have her experience come full circle; on April 25, she will have Seymour fifth-grade students shadow her for the University’s 21st Shadow Day. Syracuse University students will be paired in small groups with Seymour students. They will spend the day touring campus, hearing from campus officials and sharing meals together.