More than 500 admitted students will fill the Dome on Sunday, April 14, for Own the Dome. The overnight event gives admitted students an out-of-the-box opportunity to be acquainted with one another and with current students, faculty and staff. 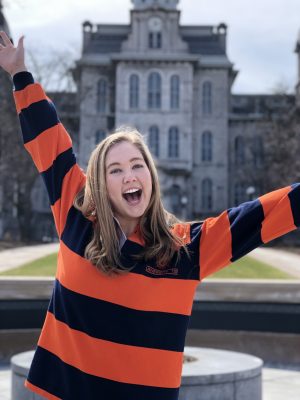 “Own the Dome is an event unlike any other because you get to experience this once-in-a-lifetime opportunity with complete strangers who will turn into your classmates, roommates and best friends,” says Hannah Butler ’19, one of the student emcees for this year’s event. “Having a sleepover on the Dome turf—a place that is integral to the experience of any Syracuse student—is an opportunity that you cannot pass up. Attending this event, both as an admitted student and a volunteer, is an opportunity that changed my trajectory and made me bleed Orange.”

Rows of sleeping areas line the Dome turf, inviting admitted students to get some rest the night before an Admissions spring reception. The other three-quarters of the Dome turf is filled with events, activities and games all night. Even though the lights are dimmed from 12:30 to 6:44 a.m., the energy of the night never fades.

Admitted students are welcomed to the turf for a picnic, with the biggest event of the night right around the corner: the most intense game of rock, paper, scissors to ever be played.

“Own the Dome offers a unique way for admitted students to participate in the vibrancy of the student experience at Syracuse, while starting to build connections with fellow admitted students,” says Maurice Harris, dean of undergraduate admissions. “From our student volunteers, to the University 100 members, to the student groups and performers, this event provides a snapshot of being a Syracuse University student and the unsurpassed experience they will have here.”

Along with Butler, Barrington Bucknor ’21 is emceeing the event. Both University 100 members, Butler and Bucknor are excited to take on this opportunity from two different perspectives: Butler attended Own the Dome as an admitted student and has come back every year since as a volunteer, while this will be Bucknor’s first Own the Dome.

Over the years of Butler’s attendance at Own the Dome, some things have changed, but the opportunity to connect with new Orange friends has remained. Last year, ThinkFast entertained admitted students for the first time, and they are returning this year. The interactive trivia company’s return, along with the chicken tenders, excite Butler most for the upcoming event.

Looking back on the Own the Dome she attended as an admitted student, Butler remembers the smaller moments being the most transformational. “One of my most memorable is playing Twister with all of my new friends at 2 a.m. in the Dome. The Dome was dimly lit to encourage everyone to get some sleep, but everyone around me was too excited and full of sugar from the ice cream cart to lay down. The dim lighting made it look like the sun was setting in the Dome, and I remember thinking I had never seen anything more beautiful.” 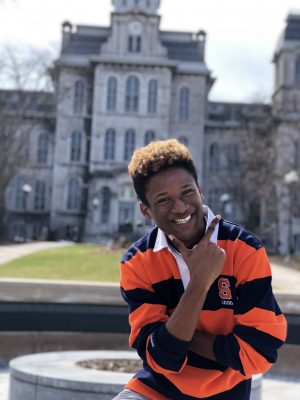 “Being a tour guide, I am able to share my love for Syracuse University by telling prospective students some of the awesome experiences that are available to them on campus,” says Bucknor. “Emceeing Own the Dome this year, I am most excited about getting the incoming class thrilled about being on campus and meeting some new friends as they start their college journey together.”

On Sunday, when admitted students flood the Dome and the campus, beyond the student volunteers and dozens of staff on site, the whole campus will open itself to folks from across the world that may make Syracuse University their home for the next couple years.

“As a high school senior, I arrived at Own the Dome unsure about where Syracuse stood on my list of future schools and, because of the current students who answered my questions, shared their stories and bled Orange throughout the whole event, I flew home to California knowing Syracuse was the school for me,” says Butler.