Mark Muster, a master’s degree candidate in the Department of English in the College of Arts and Sciences, has been selected to receive this year’s award for the best essay by a graduate student in the humanities at Syracuse University. 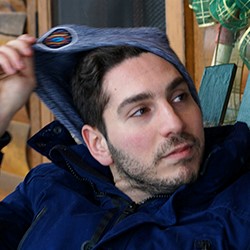 Muster’s paper, titled “Re-synching Queerness: Futurity in the Ephemeral in Andrew Haigh’s ‘Weekend’ and James Baldwin’s ‘Another Country,’” will be read from during this year’s awards ceremony on Thursday, April 18, from noon to 2 p.m. in the Peter Graham Scholarly Commons, 114 Bird Library.

The annual award honors Mary Hatch Marshall, the first woman to achieve the rank of full professor in The College of Liberal Arts. She held the Jesse Truesdell Peck Chair in English literature, served as the first director of the Honors Program and was among the founding members of Library Associates.

Students from the Departments of African American Studies; Art & Music Histories; English; Languages, Literatures, and Linguistics; Philosophy; Religion; Writing Studies, Rhetoric, and Composition; and Women’s and Gender Studies are eligible for the award.

For those wishing to make a gift to the Mary Hatch Marshall Award Endowment in remembrance of or in honor of Marshall, contact Ron Thiele, assistant dean for advancement for the Libraries, at rlthiele@syr.edu or 315.560.9419.