Share
914WorksCollege of Visual and Performing ArtsGraduate SchoolSchool of Art 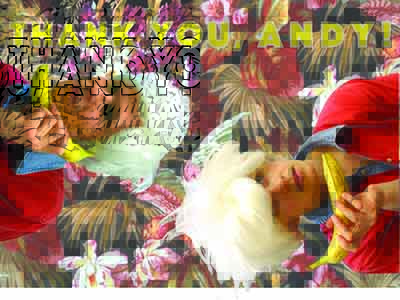 914 Works will present “Thank You, Andy!,” a two-person exhibition of work by Brett Morgan G’21 and Hollie Lyko G’19, April 10-13. Morgan and Lyko are students in the M.F.A. degree program in studio arts in the College of Visual and Performing Arts’ School of Art.

Referencing domestic space, “Thank You, Andy!” is a collaboration of kitsch objects that pervert and queer expectations. The show acknowledges the profound influence of Andy Warhol on both Morgan and Lyko’s practices, through their use of popular imagery, repetition and the creation of identity.

Using the porcelain cat figurine as a metaphor for the female body, Lyko critiques societal standards and ideals of women. In the series “Delft Pussy,” the artist distorts the physical form of the objects and camouflages them in blue and white floral imagery to unapologetically celebrate the noncompliance of gender standards.

In his body of work, Morgan combines the codes and innuendos of gay culture to create fantasy assemblages that queer domestic space through the lens of the ceramic tchotchke. Deconstructing the ceramic rooster, parts have been substituted and replaced with fragments of peeled bananas and male genitalia.

Lyko grew up northwest of Philadelphia in the small suburb of Hatfield, Pennsylvania. She earned a B.F.A. degree in ceramics at the University of Hartford. Lyko is influenced by the spaces she encountered as a child, both domestic and public. Her studio practice manifests itself from the curio cabinet holding porcelain treasures to the souvenir of a tourist attraction gift shop.

Morgan received a B.F.A. and B.S.E. from Millersville University of Pennsylvania, concentrating in ceramics and K-12 art education. His work focuses on the creation of self-identity in relation to his upbringing in rural Pennsylvania. Using country kitsch and Americana images, he creates objects and collections that describe and reimagine narratives of memory and self-discovery.

914Works is an intimate space for VPA students and faculty to present individual or group exhibitions, readings and small-scale performances during the academic year.