The Dome’s air-supported roof has been a part of the Syracuse skyline since its dedication on Sept. 20, 1980. When construction was completed, the Dome was the fifth-largest domed stadium in the United States and the first of its kind in the Northeast. The air-supported roof, which is suspended 160 feet above the playing surface, maintains its structural integrity with internal air pressure exceeding or equaling pressure applied from the outside. All access to the Dome takes place in an airlock, which is why revolving doors are how fans enter and exit the stadium.

One of the last of its kind, the Dome’s roof will be replaced this year as part of a planned $118 million renovation. The building’s current design poses many challenges for an event like this past weekend’s live motorsport show, Monster Jam, operated by FELD Entertainment. “My staff works crazy hours that week [of Monster Jam preparation]. There’s not much sleep,” says Pete Sala, vice president and chief campus facilities officer. Unlike at other venues, tons of dirt, merchandise, monster trucks, payloaders, bulldozers and excavators enter the Dome systematically to avoid depressurization. 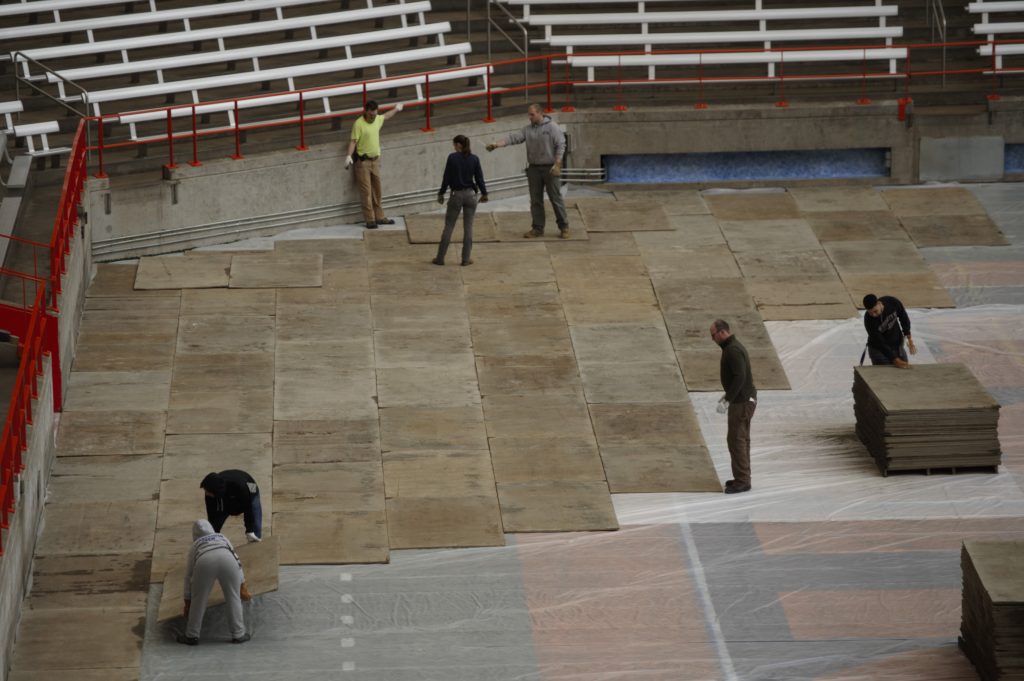 Once the plastic lining is in place, plywood is installed. On top of that comes the dirt.

It takes the effort of countless staff to prepare the Dome to host 38,000 Monster Jam fans. Sala started working at the Dome part-time when it opened in 1980. He took over as managing director in 2010, and Monster Jam was the first event he booked. “They had been driving us crazy to get in here,” Sala says. “It was something I always wanted to do. And I just thought it was really cool how the whole process went on.”

Representatives from FELD Entertainment visited campus and booked the first show in 2011. That inaugural setup included the 10,000-pound, 12-foot-wide trucks driving up the hill outside of the Dome. That had to change after the fall 2014 opening of Dineen Hall. The new rules required a custom-built towing mechanism. That’s a small concession when compared to the incredible amount of time it takes to prep the Dome for show time.

Preparations for Monster Jam begin when heavy equipment arrives at the Dome on the Monday before. Eleven members of the Dome staff cover the entire Dome floor with 40-foot by 100-foot sheets of plastic. Then forklifts bring in the first load of materials through the airlock—5,500 sheets of 3/4-inch plywood; 50 plywood sheets per pallet. The Dome staff lays the sheets on the floor by hand.

“We’re known as one the most efficient and fastest crews in the country when it comes to covering the turf. So that process literally takes a couple hours, which normally takes eight to ten at other venues,” Sala explains. 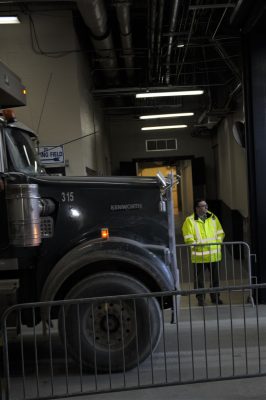 Elsewhere in the Dome, any carpeted area is covered in plastic. This keeps the offices as dirt free as possible. “When you walk out on that dirt, you carry it everywhere you go,” Sala says.

Next, on Tuesday before the event, a tractor trailer from FELD entertainment arrives at the Dome with all of the merchandise that will be sold at the event. Mark Tewksbury, director of residence dining and Dome operations, is responsible for organizing and cataloging all the commemorative T-shirts, cups, toys and posters that will be sold.

Tewksbury has also improved the process for loading in the merchandise over the years, based on his experience with the air-supported roof. “The Tuesday before, I request the trucks are here to unload. If I wait any longer, once they start bringing dirt in, I can’t come through that overhead door when they have the overhead door into the arena open.

“We didn’t know that Year One. It took me the better part of the day just to get the merchandise in the building,” Tewksbury recalls. “Because, let’s face it, the dirt was more important than T-shirts, you know.” The first experience with Monster Jam forced Tewksbury to meticulously plan every pallet being moved into the Dome to be in sync with dirt being brought into the airlock.

Six to eight staff members receive the shipment from FELD. In addition to stocking several concessions stands located throughout the concourse, Club 44 is converted into a concessions space. “We’ll do probably 20 percent of our sales just out of that one store,” Tewksbury says. He feels FELD entertainment has built a great relationship with Central New York fans. They have an opportunity to meet the drivers, touch the trucks and get their pictures taken at a “Pit Party” held before the event.

After the show, Tewksbury and a few of his management staff close down the concessions and leave around 4 a.m. 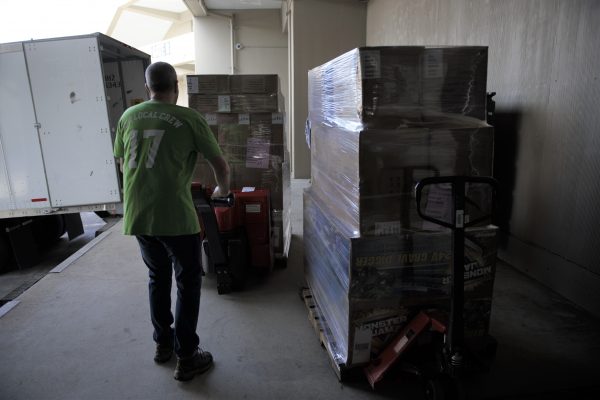 “The nice thing about the crew here is they’re really dedicated,” Tewksbury says. “I have never had to tell anyone we’re staying late. They know, and they do it. This whole crew knows it’s part of the gig.

“It’s amazing how hard everybody works to pull this event off, because it’s so different from what we do day in and day out,” he says.

Loading in the dirt begins on Wednesday before the show. “What’s challenging about an air-supported facility is that we have an airlock that two dump trucks can fit in at a time,” Sala says. About 275 to 300 loads of dirt are needed to build the track and jumps. The load-in process takes place over two days. “It’s not like you can have 50 trucks. Because they’re going to be in line waiting to get in, and it’s very inefficient,” explains Sala. At first, only two trucks are loaded and sent to the site. And as the process continues, up to 10 trucks are used in a constant rotation.

The dirt has been recycled several times. It is kept in a large pile at Skytop. The dirt is composed mainly of clay and comes from the Baldwinsville area. Finding the right dirt was another refinement of the process over the years. “We had years where it was not the best. We had to add sand and sawdust to it,” Sala says. “So having it and knowing it’s right there a mile away makes us a very attractive venue.”

In addition to the dirt, the event uses wrecked cars as part of the track. “There’s typically anywhere from 10 to 15 crushed cars that come from a local car crusher guy,” Sala says. A crew of track specialists from FELD Entertainment builds Monster Jam’s jumps and straight-a-ways. “All they do is build these tracks. Every track is different,” says Sala.

“Wednesday is a very long day with the dirt. They try to be done by seven o’clock or eight o’clock at night,” says Sala. “But my staff is here much later than that.”

Saturday arrives, with everything in place and the event ready to begin.

By Thursday, the Dome is filled with dirt and representatives from FELD Entertainment polishing the course.

The Pit Party is Friday and Saturday. Groups like the Boy Scouts and Cub Scouts are invited to attend. Those fans need a place to park, and that’s where Parking Services begins its role. Fans are asked to park at the lots near Manley Field House, so Parking Services orders buses to shuttle to and from the Dome.

Outside of concerts, this is the largest number of buses that are ordered on campus all year, says Dee Bailey, Parking Services associate director of field operations and events. Much like Sala and Tewksbury, Bailey has improved her process over the years. “I learned a lot after the first year. That first time I did not have enough buses, and that was not going to happen again,” she says.

Bailey looks at data like presales and orders the appropriate number of buses from Centro. Parking Services also assists with designating parking for the Monster Trucks and helping control traffic during the dirt load-in. About 75-80 parking staff are on duty at the event. It is a lot of work, but Bailey sees the positive side.

“I think we have an amazing team at the Dome, and I love working with them all,” Bailey says. “A lot of really nice folks go to this event, and I love watching the kids. That is the fun part of the whole event.”

On Saturday, the gates open in the early afternoon. Fans attend the Pit Party, and many stay at the Dome for the majority of the day. “The DARE group from the Syracuse Police Department does an amazing job of distributing tickets and promoting involvement with our youth,” says Sala. “They’re a big player in this.” 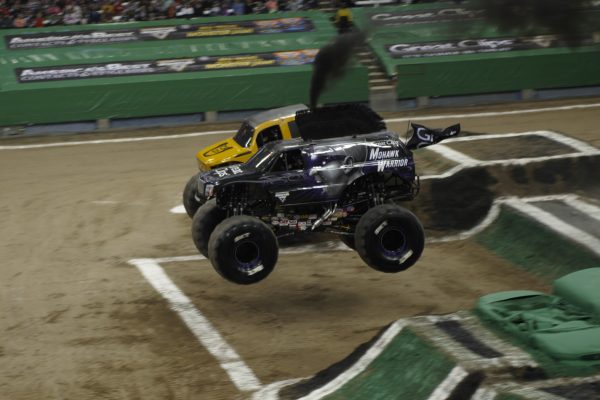 Time for some monster truck fun.

Air quality is maintained despite the huge qualities of dirt. “We don’t use any return air in the building. All the air that comes into the building is brought in from the outside. And all the return air dampers are shut,” says Sala. “We double filter all of our air handlers. Double filter everything.”

The levels of carbon monoxide are monitored by the Syracuse Fire Department during the show to ensure proper ventilation. “I have a great relationship with the city fire department,” Sala says. “They play a big role in this event.”

After the show ends, the facility is once again transformed by the Dome staff. “And by six o’clock, seven o’clock in the morning, it’s just amazing what’s not in the building anymore,” says Sala. This weekend’s event concluded shortly after 9 p.m. Saturday, and the crew worked through the night to prepare the Dome for a Spring Reception.

“The crew that we have here is amazing. That goes without saying for everything we do here,” he says. “The group of people that work here are probably some of the most dedicated people on this campus.”

Sala says it’s not uncommon for his staff to each work around 100 hours during the week of Monster Jam. In addition to University staff, part-time student employees help out. “The reason this building functions the way that it does is because of our ability to access a labor pool that is as dedicated as we are,” says Sala.

Tim Grover, a Dome staff member, started work at 7 a.m. Saturday, placing barrels on Harrison and Walnut streets to help manage parking. The Dome staff was then sent home briefly in the afternoon to rest and prepare for the event. Grover came back to work to breakdown the Pit Party at 4 p.m. and was still working at noon on Sunday, breaking down the temporary fencing erected around the Stadium Lot that hosted the monster trucks. “We’ve been running multiple shifts and just cranking,” he said.

Though this will be the last year the Dome will be pressurized, the enormous effort that goes into events like Monster Jam bringing together Syracuse University and the surrounding community will not change. It creates a microcosm of the spirit of service that is found everywhere on campus.

“The Dome is a city,” says Sala. “You’ve got all these city police and city firemen here that are all very, very well trained. And our Public Safety staff plays a huge role. So from concessions right straight through, we run a city. We really do.”