Share
College of Visual and Performing ArtsSchool of Art 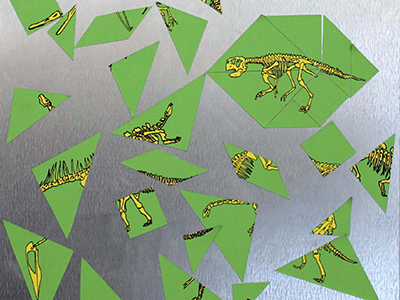 Chris Wildrick has long been captivated by dinosaurs.

As an artist, he is especially interested in and studies the aesthetics and interpretations of dinosaurs. He even once contemplated a career switch into the paleontology field.

Over the past several years, Wildrick, associate professor of studio arts in the School of Art in the College of Visual and Performing Arts, has infused that interest into his research and artistic practice. One result of his work is “Out of Sight Into Mind,” a collection of interactive charts and games that captures the magical spirit that dinosaurs hold in our culture, even though they became extinct millions of years before humans walked the Earth.

It will be one of 38 interactive exhibitions at ACCelerate: The ACC Smithsonian Creativity and Innovation Festival, which will be held April 5-7 at the Smithsonian Institution’s National Museum of American History in Washington, D.C. Virginia Tech’s Institute for Creativity, Arts and Technology and the Smithsonian’s National Museum of American History’s Lemelson Center for the Study of Invention and Innovation are hosting the festival.

ACCelerate is a celebration of creative exploration and research at the nexus of science, engineering, arts and design among the 15 colleges and universities in the Atlantic Coast Conference (ACC). More than 40,000 visitors to the museum are anticipated over this three-day event. The festival features interactive installations and 13 performances grouped in three thematic areas: Exploring Place and Environment; Exploring Health, Body and Mind; and Exploring Culture. Wildrick is one of three Syracuse faculty members to exhibit or perform in the festival.

“Out of Sight Into Mind” mixes together art, psychology, sociology and paleontology. It investigates how much the general public really knows about dinosaurs; the way we imagine dinosaurs interacted with each other; and the roles they play in our culture. The exhibition is participatory, with creative, interactive games for children and adults that test dinosaur knowledge.

“I am interested in how the general public picks up on the different interpretations of dinosaurs in our culture,” Wildrick says. “Why are they so popular? Why dinosaurs?”

The debate of how dinosaurs looked stretches as far back as the 1800s, with paleontologists and illustrators each giving their own interpretations. Even today, we see a wide range of how dinosaurs are depicted, from Hollywood movies to dinosaur chicken nuggets.

Within the exhibition, there are magnet boards, puzzles and quizzes that test dinosaur knowledge. Participants will be able to learn about dinosaur evolutionary trees, bones and a day in the life of a dinosaur, among other things.

Wildrick is assisted with the exhibition by Sarah Allam and Kaia Morales, a sophomore and junior, respectively, in the School of Art in the College of Visual and Performing Arts.

More information on Wildrick’s dinosaur research can be found at www.chriswildrick.com.