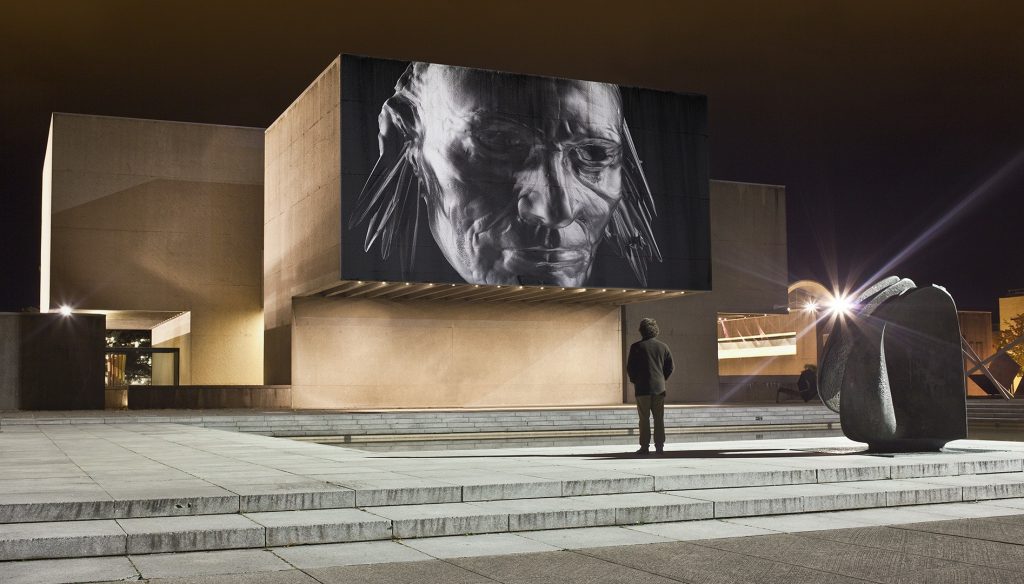 Light Work’s Urban Video Project presents “Culture Capture: Terminal Addition”  by the New Red Order (NRO), an Indigenous artist collective. The NRO’s core contributors are Adam Khalil (Ojibway), Zack Khalil (Ojibway) and Jackson Polys (Tlingit), and they use video and performance to collectively challenge European settler and colonialist tendencies—such as “playing Indian”—with what they call “sites of savage pronouncement,” the purpose of which is to shift potential obstructions to Indigenous growth and agency.

Light Work commissioned “Culture Capture: Terminal Addition” for UVP and the New Red Order created this work during their monthlong visit to Syracuse in December 2018. The piece will be on view at the Urban Video Project’s architectural projection site on the north facade of the Everson Museum through April and May 2019.

The artists will also be here for a screening, lecture, and moderated conversation on Thursday, April 18, at 6:30 p.m. in the Everson Museum of Art’s Hosmer Auditorium. The auditorium is wheelchair accessible, and the event will offer CART services for hard of hearing audience members. The screening and Q&A are free and open to the public. Light refreshments will be served after the program.

Half tongue-in-cheek absurdism and half deadly earnest, “Culture Capture: Terminal Addition” continues the New Red Order’s ongoing project of “culture capture,” recruiting viewers to participate in a program of practical strategies to counter the “salvage mindset,” which sets aside indigenous culture and sovereignty by consigning it to the past, thereby removing it from the present.

These strategies include using new, accessible technologies, such as smartphone apps that produce 3D scans of objects,  both of indigenous material that museums and other institutions may hold and public monuments that celebrate the ideals of a region’s European settlers.

As the title of the work, “Terminal Addition” highlights the difference between addition and removal. The concept of “removal” is central to current debates about whether to remove problematic historical monuments—for example, Confederate war monuments in the South. It was also in the name of the Indian Removal Act, signed into law by President Jackson, which resulted in the displacement and death of thousands of Native peoples in what we now call the “Trail of Tears.” Both present removal as a quick fix. With “Culture Capture: Terminal Addition,” the NRO recognizes that acts of removal inevitably contain contradictions, and proposes an additive approach instead.

NRO virtually captures objects and then subtly alters and repurposes them. The resulting spectral projection transforms their meaning and “repatriates” them.

With “Culture Capture: Terminal Addition,” the New Red Order order invites viewers to join indigenous peoples as cultural accomplices. The stakes are high: in the face of impending ecological catastrophe and unprecedented global inequality, the futures of Indigenous Peoples are bound up with a livable future for all.

Shot in and around Syracuse, “Culture Capture: Terminal Addition” uses local archives, collections and locations, including the Columbus Monument in downtown Syracuse, the Saltine Warrior on the Syracuse University campus, as well as Syracuse University’s archive of the work of James Earl Fraser, the artist who created the widely known “End of the Trail” and “Indian Head Coin.” This project was made possible through the support and collaboration of the Syracuse University Art Galleries, CitrusTV, S.I. Newhouse School of Public Communications and Special Collections Research Center.

Zack Khalil (Ojibway) is a filmmaker and artist from Sault Ste. Marie, Michigan, currently based in Brooklyn, New York. His work often explores an indigenous worldview and undermines traditional forms of historical authority through excavating alternative histories and innovative documentary forms. He recently completed a B.A. at Bard College in the Film and Electronic Arts Department, and is a Gates Millennium Scholar and UnionDocs Collaborative Fellow.

The Khalil brothers’ acclaimed debut feature film “INAATE/SE/” has screened at museums and in festivals around the world.

Jackson Polys (Tlingit) lives and works between what are currently called Alaska and New York. His work examines the limits and viability of desires for indigenous growth. He began carving with his father, Tlingit artist Nathan Jackson, from the Lukaax.ádi Clan of the Lk̲óot K̲wáan, and had solo exhibitions at the Alaska State Museum and the Anchorage Museum before receiving a B.A. in art history and visual arts and an M.F.A. in visual arts, both from Columbia University. He taught at Columbia (2016-17) and was advisor to Indigenous New York with the Vera List Center for Art and Politics.

This will be the third exhibition in UVP’s 2018-19 programming year, titled “The Past Keeps Happening.” During the year, we’ll feature artists whose work explores the ways in which past imagining of the future and future reflections on the past are always at odds with the lived present.

Urban Video Project (UVP), a program of Light Work in partnership with the Everson Museum of Art and Onondaga County, is an outdoor architectural projection site dedicated to the public presentation of film, video and moving image arts. It is one of few projects in the United States dedicated to ongoing public projections and adds a new chapter to Central New York’s legacy as one of the birthplaces of video art, using cutting-edge technology to bring art of the highest caliber to Syracuse.