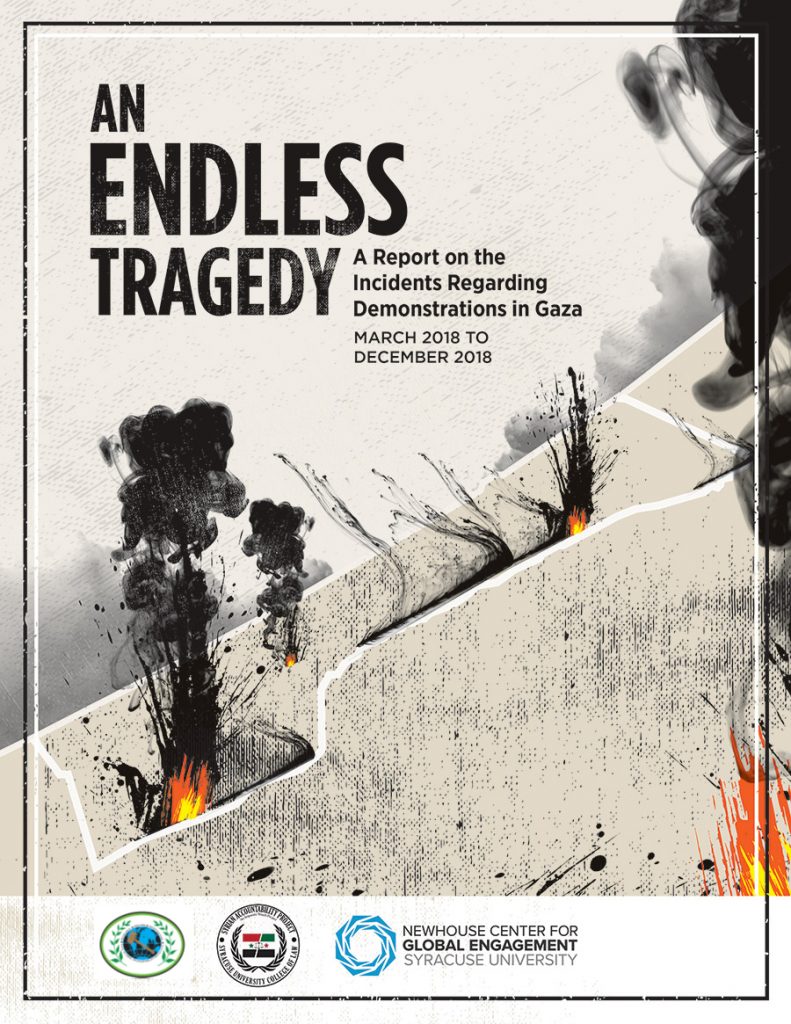 Syracuse University College of Law students working for the Syrian Accountability Project have released an exploratory account of the violence that has occurred along the border of the Gaza Strip and Israel starting in March 2018. “An Endless Tragedy: A Report on the Incidents Regarding Demonstrations in Gaza” examines acts of violence perpetrated by both sides of a conflict that has become known by Palestinians as “The Great March of Return.” The report—supervised by Distinguished Scholar in Residence David M. Crane L’80—has been sent to the United Nations, which continues its own analysis of the conflict through the UN Human Rights Council Independent International Commission of Inquiry, of which Crane is a former member.

Authored by third-year law students Margaret Mabie and Brandon Golfman, the report covers actions that took place through December 2018. On March 30, 2018, violence erupted along the Gaza/Israel border fence as Palestinians began protesting Israel’s blockade of Gaza and demanding the “right of return” to land lost in the 1948 Arab-Israeli war.

According to the Office of the UN High Commissioner for Human Rights, the ongoing protests—which have continued into 2019—have claimed the lives of 189 Palestinians (with roughly 19,000 injured) and one Israeli soldier. Israel’s use of deadly force—against what it claims are militants aligned with Hamas—was condemned in June 2018 by UN General Assembly Resolution ES‑10/L.23. This resolution calls on Israel to protect Palestinian civilian protesters, to allow humanitarian assistance into Gaza and to work toward mediation with the Palestinian government.

“We looked at potential crimes committed by all sides in the conflict,” says Mabie, “and we wanted to inspect the facts because no amount of politicking can erase reality. We want the report to be seen as neutral and measured. We weren’t doing the bidding of any side in the conflict.”

The report’s structure, explains Mabie, follows that used by SAP in its reports on the Yazidi Genocide, the gas attack on the Syrian province of Idlib, the Siege of Aleppo and sexual violence in the ongoing Syrian Civil War.

The Gaza report begins with a historic overview of the conflict between Israel and Palestine and an examination of “Nabka” (the 1948 Palestinian exodus) and “Nabka Day,” which the 2018 demonstrations were intended to commemorate. After an overview of the 2018 protests, the report then provides a highly detailed, day-by-day analysis of the violence in its Conflict Mapping Narrative, which uses open sources and on-the-ground reporting to pinpoint legally relevant acts perpetrated by all sides of the conflict. The narrative is accompanied by a Crime Base Matrix that isolates acts of violence that may constitute war crimes or crimes against humanity, with specific articles of international humanitarian law cited for each act.

At the heart of the report is the question about what differentiates ordinary civic protest from armed, asymmetric conflict. On one side of this question is the fact that the March 30, 2018, demonstration began with “an estimated 30,000 Palestinians gathered at six points along the border to protest Israel’s policy toward Palestine … [many] bussed by Hamas.” The report’s Crime Base matrix for that day notes that “Palestinian protesters hurled rocks at Israeli soldiers and rolled burning tires toward the border fence … [which] served as the predicate act for Israeli use of force against the protesters.”

On the other hand, the June 2018 UN resolution expresses “deep alarm at the loss of civilian lives and the high number of casualties among Palestinian civilians, particularly in the Gaza Strip, including casualties among children, caused by the Israeli forces.” In February 2018, the UN Independent Commission of Inquiry released its own analysis of the Gaza protests, titled “No Justification for Israel to Shoot Protesters with Live Ammunition.”

“An Endless Tragedy” recommends that individuals on both sides of the conflict responsible for alleged war crimes and crimes against humanity should be prosecuted by a domestic court of competent jurisdiction or “failing that, the United Nations Security Council should exercise its authority to submit the matter to the Prosecutor of the International Criminal Court in accordance with Article 13(b) of the Rome Statute.”