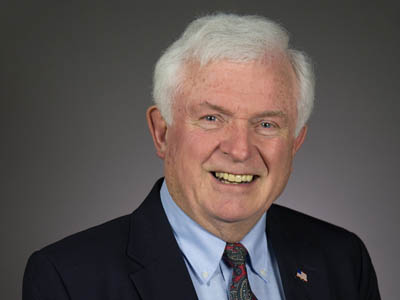 On Sunday, April 14, the group will perform from 1 to 2 p.m. in the sanctuary of DCC at 3600 Erie Blvd., Syracuse. Open to the public, the concert features traditional and contemporary favorites, including compositions and arrangements by local resident Tom Camp.

Several members have ties to Syracuse University, including soloist David DiGennaro ’90 and guest conductor William “Bill” Harris, a veteran of the Syracuse Symphony Orchestra, who teaches low brass in The Rose, Jules R. and Stanford S. Setnor School of Music in the College of Visual and Performing Arts.

“Dave is a Setnor alumnus and a former student of mine,” beams Harris, also professor of music emeritus at Onondaga Community College. “It’s always a pleasure to work with him.”

Moreover, guest conductor Mark Anderson is a master’s student in the Setnor School’s conducting program, and Clifford Crain and Jim D’Addario also play in the Syracuse University Brass Ensemble, based in the College of Arts and Sciences.

The concert is free; however, a $5 donation supporting DCC’s organ fund is encouraged. For more information, contact Rob Enslin at 315.559.8115 or rmenslin@syr.edu. 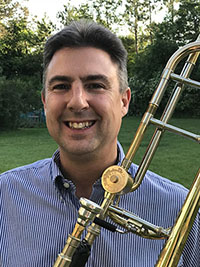 David DiGennaro ’90 is a music teacher at Homer High School.

“We’re thrilled to partner with DeWitt Community Church on this special springtime concert,” says Camp, affectionately known as Bones East’s “staff arranger.” “Whether you’re an experienced musician, a beginner or someone who appreciates fine playing, the concert offers something for everyone. The sound is nothing short of majestic—the perfect accompaniment to the holidays.”

Bones East will present more than two centuries of music, including “Achieved is the Glorious Work” from Haydn’s oratorio “The Creation; the “Adagio” from Saint-Saëns’ Symphony No. 3 (“Organ Symphony”); and “Make Our Garden Grow” from Bernstein’s operetta “Candide,” featuring soloists Pete Sanborn, a retired military bandsman, and Jim Peer, assistant director of brass instruction for the Oswego City School District.

The program includes three Camp originals: “Latine Ossium”; “For Those Who Have Gone Before”; and “Reflective Journey,” featuring DiGennaro as soloist. The group also will present Camp’s arrangements of the Scottish folksong “Durisdeer”; “Briny Ballads”; and the U.S. Navy Hymn, “Eternal Father, Strong to Save.”

Rounding out the program are low-brass chestnuts by Vaclav Nelhybel, Tommy Pederson and Josef Rheinberger.

The late Howard Kelley founded Bones East in the early 1980s, around the same time he and his wife, Gayle, formed the Skaneateles Community Band. Since then, Bones East has sported a core group of about 15-20 trombonists—semi-pros, students and retirees, mostly—who play for the joy of it.

The group frequently plays to packed houses throughout the City of Syracuse and Central New York. Recent engagements include the Moravia Music Boosters Club and “Frühling Posaunen” (“Spring Trombones”) in Ithaca, where Bones East shared the stage with trombone choirs from Eastman, Penn State and Ithaca College.