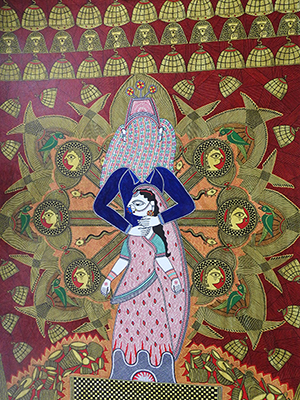 “Burning the Bride,” a Mithila painting from Susan S. Wadley’s personal collection, on display at ArtRage.

The Ray Smith Symposium—in conjunction with Syracuse Symposium, whose theme this year is “Stories”—continues with eight events under the heading “Stories We Are Told, Stories We Tell.”

The series, which explores the role of storytelling in Indian culture, is led by Susan S. Wadley, the Ford-Maxwell Professor of South Asian Studies in the College of Arts and Sciences (A&S) and the Maxwell School, in partnership with the South Asia Center (SAC).

All events are free and open to the public, and take place at the ArtRage Gallery (505 Hawley Ave., Syracuse), unless otherwise indicated. For more information, contact Emera Bridger Wilson G’17, G’22, associate director of and outreach coordinator for SAC, at elbridge@maxwell.syr.edu or 315.443.2553.

“The Ray Smith Symposium [based in A&S] moves to connect the University with the broader campus community by involving ArtRage and a cross-section of Syracuse faculty,” says Wadley, a veteran anthropologist. “It’s the public humanities at its best.”

Wadley also is co-curator of an exhibition at ArtRage titled “From Gods to Social Justice: Indian Folk Artists Challenging Traditions.” Running from April 16-May 18, the show includes Mithila artwork from northern India, where she has carried out field research for more than a decade. “They’re from my personal collection and include several never-before-seen paintings,” says Wadley, who is retiring from Syracuse this summer. 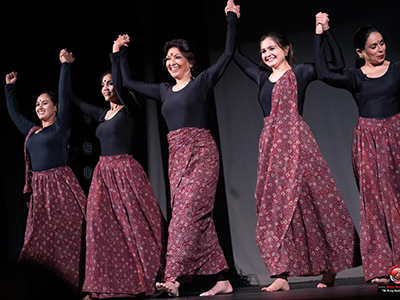 Indian dancer-activist-choreographer Mallika Sarabhai (third from left) in “The Colours of Her Heart.” (Photo courtesy of Magic Dust Photography)

Friday, April 12
Dance-Drama Performance: “The Colours of Her Heart,” co-directed by Mallika Sarabhai and Yadavan Chandran. Co-sponsored by SAC, the six-person work features choreography by Sarabhai (also one of the performers) and music by Samia Malik.
7 to 9 p.m.
Everson Museum of Art, 401 Harrison St., Syracuse
Free for Everson members; $8 for non-members

Tuesday, April 16
Lecture: “Telling Women’s Stories Through Painting and Filmmaking in Mithila, Bihar, India,” presented by Coralynn Davis, professor of women’s and gender studies and of anthropology at Bucknell University.
6 to 8 p.m. 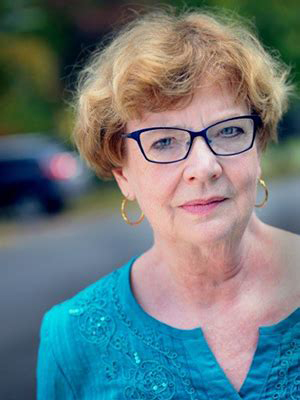 Thursday, April 25
Seminar: “Narrative as Resistance,” co-facilitated by Jason Zencka, an award-winning author and journalist, and Florencia Lauria, a Ph.D. student in English at Syracuse University.
7 to 8:30 p.m.
Registration required; R.S.V.P. at info@artragegallery.org by April 22

Sunday, April 28
Interactive Dance: “Come Dance With Us,” a family-friendly, interactive program, led by Sudha Raj G’85, G’91, a teaching professor of nutrition science and dietetics in Falk College, who also is an authority on Bharatanatyam, an ancient form of Indian classical dance.
3-5 p.m.

Wednesday, May 8
Screening: “Khoon Diy Baarav” (“Blood Leaves Its Trail),” with a talkback with Wadley.
7-9 p.m.

One of the signature offerings of the Ray Smith Symposium is “From Gods to Social Justice.” In addition to Mithila paintings (created by women from the region), the exhibition features Patua scrolls. On loan from Geraldine Forbes’ personal collection, the scrolls are made by men from the Bengal region of India and can be several feet long. 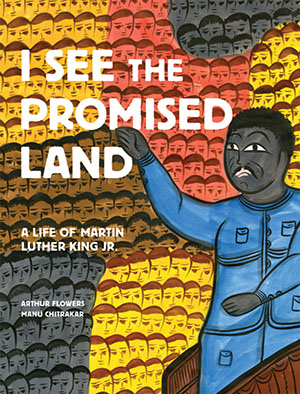 Patua painting also figures prominently in Arthur Flowers’ performance, based on his 2013 graphic novel by the same name. Onstage will be the original scroll that Patua artist Manu Chitrakar created for Flowers’ book.

Wadley notes that “[Flowers] will use Manu’s scroll to turn Dr. King’s historic journey into a truly universal legacy.”

Additional support for “The Colours of Her Heart” comes from the Ford-Maxwell Professorship (Maxwell), the Department of Women’s and Gender Studies (A&S), the Indian Community and Religious Center, the Everson Museum of Art and the University’s chapter of the Society for the Promotion of Indian Classical Music and Culture Amongst Youth.

The Ray Smith Symposium takes its name from the Auburn, New York, native, who, after graduating from Syracuse in 1921, became a highly respected educator and administrator.