Cruel April 2019 Kicks Off at the Point of Contact Gallery 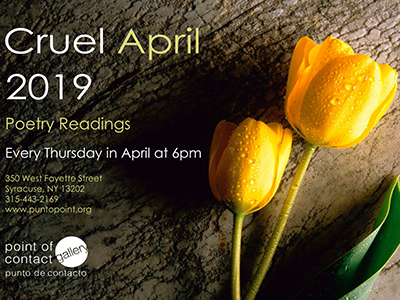 Point of Contact will once again host nationally and internationally celebrated poets for this year’s Cruel April Reading Series, which runs every Thursday in April at 6 p.m. at the Point of Contact Gallery, located on the ground floor of the Nancy Cantor Warehouse, 350 W. Fayette St., Syracuse.

Rachel Eliza Griffiths is the author of four collections of poetry, including “Mule & Pear” (New Issues Poetry & Prose 2011), which was selected for the 2012 Inaugural Poetry Award by the Black Caucus of the American Library Association, and “Lighting the Shadow” (Four Way Books 2015), which was a finalist for the 2015 Balcones Poetry Prize and the 2016 Phillis Wheatley Book Award in Poetry. Her literary and visual work has been widely published in journals and anthologies, including The New Yorker, Virginia Quarterly Review, The Progressive, The Georgia Review, Gulf Coast, Callaloo, Poets & Writers, The New York Times, American Poetry Review, Ecotone, Black Nature: Four Centuries of African American Nature Poetry, and many others. Griffiths is widely known for her literary portraits, fine art photography and lyric videos. Her extensive video project, P.O.P (Poets on Poetry), an intimate series of micro-interviews, gathers nearly 100 contemporary poets in conversation, and is featured online by the Academy of American Poets.

Brooks Haxton, a longtime professor in the English Department’s M.F.A. Program in Creative Writing at Syracuse University, has published eight books of poems, one book of creative nonfiction and four books translations from French, German, and Classical Greek. Recent books include “They Lift Their Wings to Cry” (a collection of poems from Knopf), “Fading Hearts on the River” (nonfiction from Counterpoint Press) and “My Blue Piano” (translations of poems by Else Lasker-Schüler from Syracuse University Press). He has received awards, fellowships and grants of support for original poetry, translation and scriptwriting from the NEA, NEH, Guggenheim Foundation and others.

Joel Dias-Porter’s poetry engages the act of improvisation through explorations of intimacy, jazz music and family heritage. In addition to his own CD of jazz and poetry, “LibationSong” (2002), Dias-Porter is featured on the CD anthology “Meow: Spoken Word from the Black Cat” (1996). His poetry has also been featured in the anthologies “Bum Rush the Page: A Def Poetry Jam” (2001) and “Catch The Fire!!!: A Cross-Generational Anthology of Contemporary African-American Poetry,” on the Today Show, and in the documentaries “Voices Against Violence” (1994, produced by Regi Allen) and “SlamNation” (1998, directed by Paul Devlin), as well as the feature film “Slam” (1998, directed by Marc Levin). Dias Porter’s honors include James Madison University’s Furious Flower Emerging Poet Award, and a second-place finish in the National Poetry Slam’s individual competition. A Cave Canem Fellow and member of Washington, D.C.’s WriterCorps, Porter has taught at Duke Ellington School of the Performing Arts.

Nina Puro’s writing is in Guernica, the PEN / America Poetry Series, Witness, and others, including the chapbooks “Elegy with Pilot Light” (Argos Books, 2017) and “The Winter Palace” (dancing girl press, 2015). Their first full-length collection of poetry, “Each Tree Could Hold a Noose or a House,” was the winner of the 2017 New Issues Poetry Prize, and was published in fall 2018. They are a member of the Belladonna Collaborative and recipient of fellowships from the MacDowell Colony, Syracuse University (MFA, 2012) and others.

Peter Balakian is the author of seven books of poems, most recently Ozone Journal, which won the 2016 Pulitzer Prize for Poetry. His books of prose include “Black Dog of Fate” winner of the PEN/Albrand Award for memoir, and “Vise and Shadow: Essays on the Lyric Imagination, Poetry, Art, and Culture.” Balakian is the recipient of many awards and prizes and civic citations, including the Pulitzer Prize for Poetry, Presidential Medal from the Republic of Armenia, Spendlove Prize for Social Justice, Tol-erance, and Diplomacy, and fellowships from the Guggenheim and the NEA. His work has been translated into many languages. He is the Donald M. and Constance H. Rebar Professor of the Humanities, professor of English and director of creative writing at Colgate University. Balakian’s poems have been widely anthologized, including in the 1985 “Morrow Anthology of Younger American Poets,” and have been translated into several languages. He has published essays on poetry, culture, and art in numerous journals.

Lauren Sanderson’s debut collection, “Children Were Listening,” is forthcoming from Write Bloody Press. A Canadian poet, she was born in Oakville and raised in London, Ontario. She recently graduated from Colgate University with a B.A. in creative writing, where she studied with Peter Balakian. Based currently in Chicago, Illinois, she is a writer, producer and co-founder of ISO Films LLC, a creative services agency. Her work has appeared in The Adroit Journal, Beecher’s Magazine, Storm Cellar, Point of Contact and elsewhere.

The Cruel April readings run every Thursday in April at 6 p.m. at the Point of Contact Gallery, located on the ground floor of the Nancy Cantor Warehouse Bldg., 350 W Fayette St., Syracuse. Free parking is available in the Syracuse University lot, corner of West St. and W. Fayette.

This program is possible thanks to the support of the College of Arts and Sciences and the Coalition of Museum and Art Centers (CMAC) at Syracuse University, in addition to the University’s Department of Languages, Literatures and Linguistics, and the New York State Council on the Arts (NYSCA).