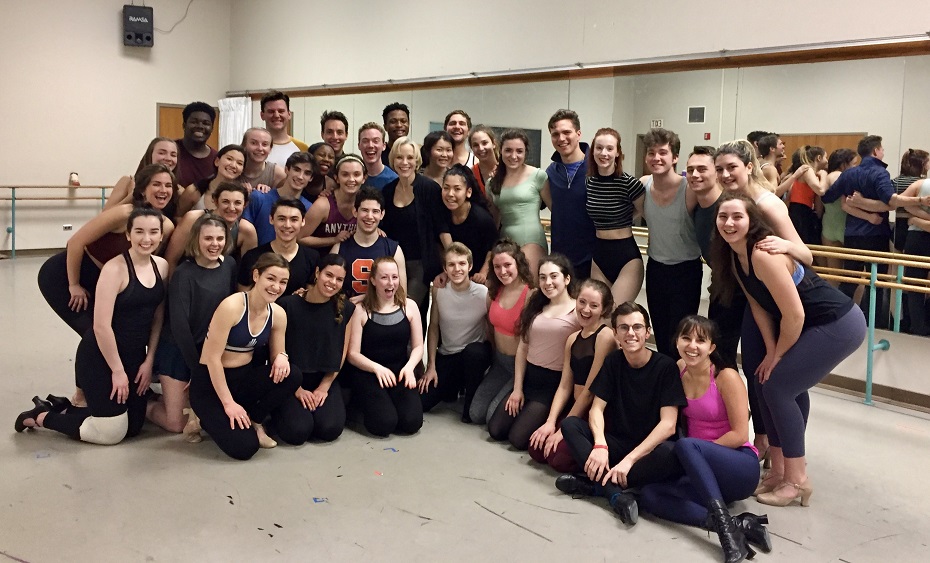 Tony-nominated actress and dancer Charlotte d’Amboise taught content from her array of Broadway shows to Department of Drama students during a four-day guest residency.

Tony-nominated actress and dancer Charlotte d’Amboise visited the College of Visual and Performing Arts’ Department of Drama in early March for a four-day guest residency in the musical theater program.

A legendary triple-threat performer, d’Amboise was invited to teach content from her array of Broadway shows, which include “A Chorus Line,” “Chicago” and “Jerome Robbins’ Broadway.” She worked with students in several tap, jazz and ballet classes as well as in Robbins’ Repertoire, an upper-level course focused on Robbins’ choreography.

d’Amboise also answered questions from the students regarding the “show-biz” industry and enlightened them with stories about directors and choreographers with whom she had the opportunity to work.

“I loved working with the students at Syracuse University,” says d’Amboise. “This is an incredible musical theater program—such dedication and talent!”

“Charlotte d’Amboise is the real deal when it comes to extraordinary talent and longevity in the theater business,” says Andrea Leigh-Smith, professor of practice and program coordinator of musical theater. “Charlotte’s family, beginning with her father, Jacques d’Amboise, and brother, Christopher d’Amboise, have both significantly impacted the world of dance. Charlotte carries on this legacy with joy and enthusiasm. Our musical theater students left each class charged, proud and inspired to work toward the dream of one day living the life of a musical theater artist.”

d’Amboise’s residency is part of the drama department’s ongoing commitment to bringing a distinguished roster of industry professionals—including department alumni—to campus to work with students. The workshops, master classes and discussions that these artists lead provide experiences that both broaden and deepen the classroom and experiential learning provided by department faculty and the working professionals of Syracuse Stage, the outstanding Equity theater company with which the department has a synergistic relationship.

d’Amboise has been gracing Broadway stages for decades. Since making her Broadway debut in “Cats,” she has been nominated for two Tony Awards for her performances in the Broadway revival of “A Chorus Line” (Cassie) and “Jerome Robbins’ Broadway” (multiple roles). She has also been nominated for numerous Fred Astaire Awards for her roles in “Pippin” (Fastrada), “Sweet Charity” (Charity) and “Damn Yankees” (Lola). Most recently, she has been seen in the role of Roxie in “Chicago,” which has earned her the LA Ovation Award, the Los Angeles Drama Critics Circle Award and the San Francisco Bay Area Theatre Critics Circle Award. She has also appeared in the Broadway casts of “Company,” “Contact,” “Carrie” and “Song and Dance.”

d’Amboise is the co-artistic director, with her husband, Terrence Mann, of Triple Arts, a musical theater summer intensive for young artists.