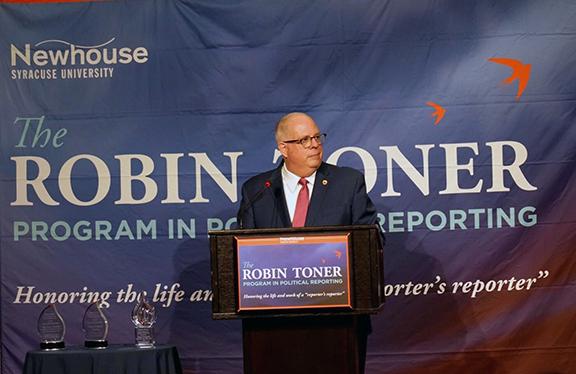 Journalist Jason Zengerle is the 2019 winner of the Newhouse School’s Toner Prize for Excellence in Political Reporting.

The prize was awarded at a ceremony March 25 in Washington, D.C. NPR’s Lakshmi Singh ’94, an alumna of the Newhouse School, was master of ceremonies.

Maryland Gov. Larry Hogan delivered the keynote address. “Our First Amendment, and our democracy itself, depend on a strong, vibrant and unfettered free press,” he said. “You may not always get it right,” he told the journalists in the room, “but you are not ‘fake news.’ You are not ‘the enemy of the people.'”

Zengerle is a contributing writer for The New York Times Magazine and a correspondent for GQ. He won for stories in each publication that explored the trickle-down effects of the Trump presidency on the House Intelligence Committee, led by Rep. Devin Nunes (R-California), a strong Trump ally; the remaking of the federal courts; and the political promise and peril it has posed for certain Democrats.

Toner Prize judge Maralee Schwartz, former politics editor for The Washington Post, said of Zengerle’s entry: “There is so much richness in the storytelling, lots of politics, policy and humanity—all providing insight into the political and legislative process.”

Toner Prize judge DeWayne Wickham, former syndicated columnist for USA Today and now dean of the School of Global Journalism & Communication at Morgan State University, said: “His stories transport readers to the intimate places and private moments that public officials rarely share with others, to give them an up-close look at his subjects. His stories left me asking for more—which I think is the highest tribute a reader can give a writer.”

In addition, honorable mention recognition was given to Isaac Arnsdorf of ProPublica and Glenn Kessler, Salvador Rizzo and Meg Kelly of The Washington Post’s Fact Checker.

Arnsdorf was recognized for a series of stories looking at the influence of some Trump donors and associates who, with little or no background in either the military or health care, are working to shift the care of the nation’s veterans to private providers, often at a higher cost to taxpayers and at the expense of veterans’ health.

Toner Prize judge Ann Compton, former White House correspondent for ABC News, called the stories a “remarkable effort to scrape through to the bottom of the barrel of ills at the beleaguered Veterans Administration.”

Toner Prize judge Joseph B. Treaster, former New York Times correspondent, now on the faculty of the School of Communication at the University of Miami, said: “Very strong reporting that shows in detail improper influence by Trump insiders.”

The Fact Checker team was recognized for a sampling of the over 5,600 false or misleading claims made by Trump. It includes a roundup of the team’s findings in 2018, an ongoing database of statements fact-checked and analysis of Trump’s statements at a campaign rally in Montana.

Said Treaster: “Very powerful stacking up of the president’s lies and distortions. The methodical, irrefutable presentation of evidence is stunning. Fact-checking articles can suffer from leaden writing. That is not the case here.”

Toner Prize judge Christina Bellantoni, former politics editor for the Los Angeles Times, now on the faculty of the Annenberg School for Communication and Journalism at the University of Southern California, said: “That interactive is incredible. The writing is clear, deliberate and never hyperbolic. I also love that it’s breezy and conversational with the reader. Such an important service.”

This year’s Toner Prize competition drew more than 100 entries from across the country and from across media platforms. This is the ninth year the Newhouse School has awarded the $5,000 prize, which is named in honor of late alumna Robin Toner ’76, who was the first woman to serve as national political correspondent for The New York Times.

For more information about the Toner Prize and the Robin Toner Program in Political Reporting at the Newhouse School, visit tonerprogram.syr.edu.