Building Personal Connections to Help Students ‘Get to a Good Place Academically, Socially and Emotionally’ 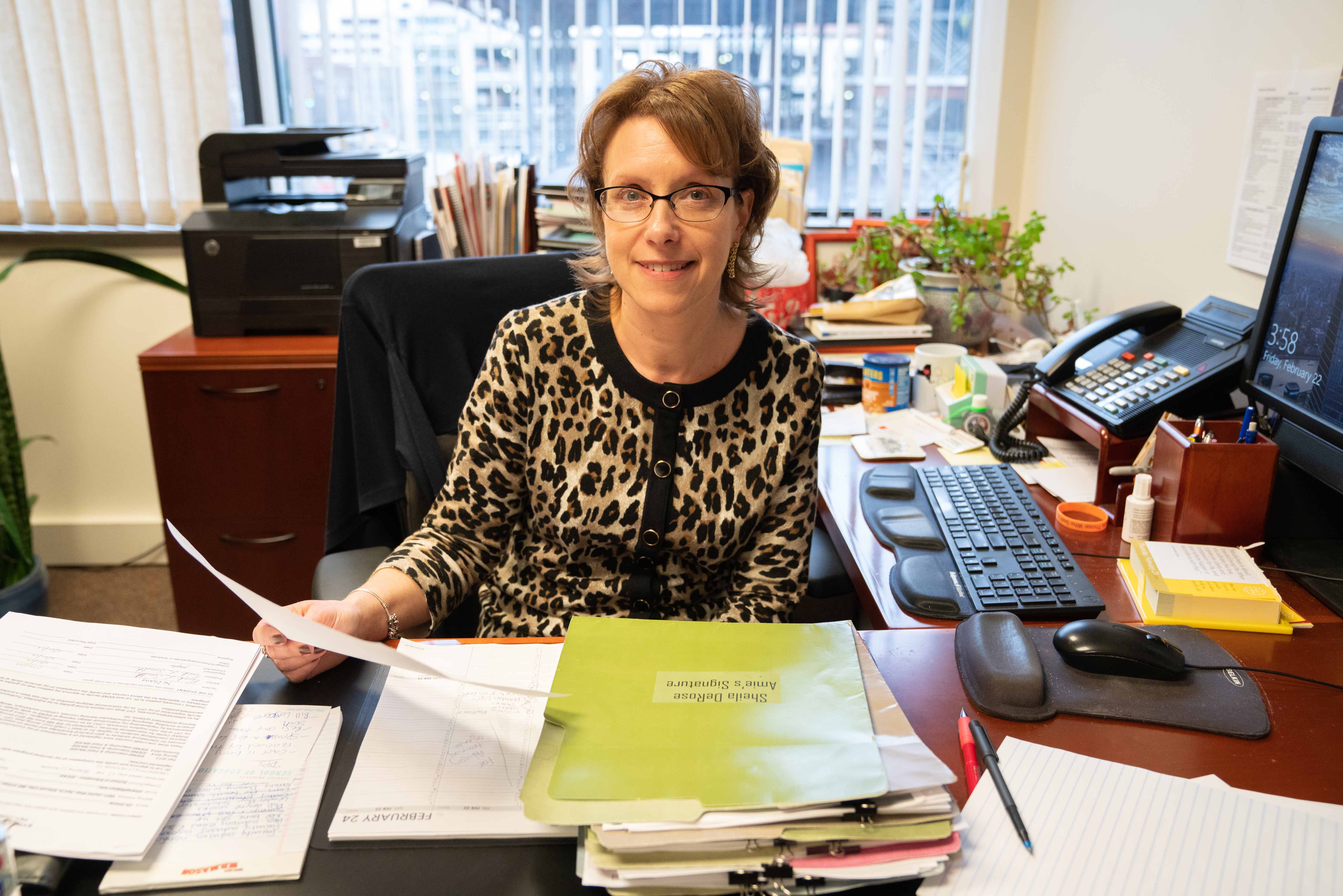 When School of Education Senior Assistant Dean of Academic and Student Services Amie Redmond was an undergraduate, she struggled with the stress that comes with leaving home for the first time. She was fortunate to have a faculty member take interest in her success.

“Somebody took me under their wing and cared about me, cared about my success, cared about my difficulties, mentored me and saw me through graduation there and encouraged me to continue going,” Redmond says. “So I see my role as doing the same, motivating students to that finish line–graduation.”

After transferring to SUNY Brockport from SUNY Canton, Redmond graduated from college in May 1992. Five months later, she joined Syracuse University’s admissions department. “I worked there for not quite four years, and I decided to come over to the School of Education,” Redmond says. She worked as an admissions recruiter for several years and continued her education, earning a master’s degree in higher education in 1995 and a degree in counseling in 2000. While working on her counseling degree, Redmond was promoted to assistant dean and later to senior assistant dean.

Redmond treats the students who attend the School of Education and their families as if they are members of her own family. She works to establish personal connections and open communication to help students. “I often think, if my son or daughter were away at school, what would I ask of an administrator?” Redmond says.

School of Education Dean Joanna Masingila recognizes Redmond’s personable style. “The most challenging aspect of Amie’s role is helping support undergraduate students as they learn to live on their own for likely the first time,” Masingila says. “She overcomes this by having a caring and compassionate attitude, knowing the University policies and procedures, and being an empathetic, supportive, yet firm guide.”

The connections Redmond builds with students and families are very personal. One of her former students was recently in town and wanted to catch up.

Redmond and the student share a deep connection. Over the holiday break of the student’s sophomore year, her twin brother passed away. An advisor referred her to Redmond, who met with the student and her mother when she returned for the spring semester. The personal trauma led to rough patches, and the student met often with Redmond over the next three years. Redmond supported the student, and she graduated last May. At graduation, the student gave Redmond an item she cherishes. 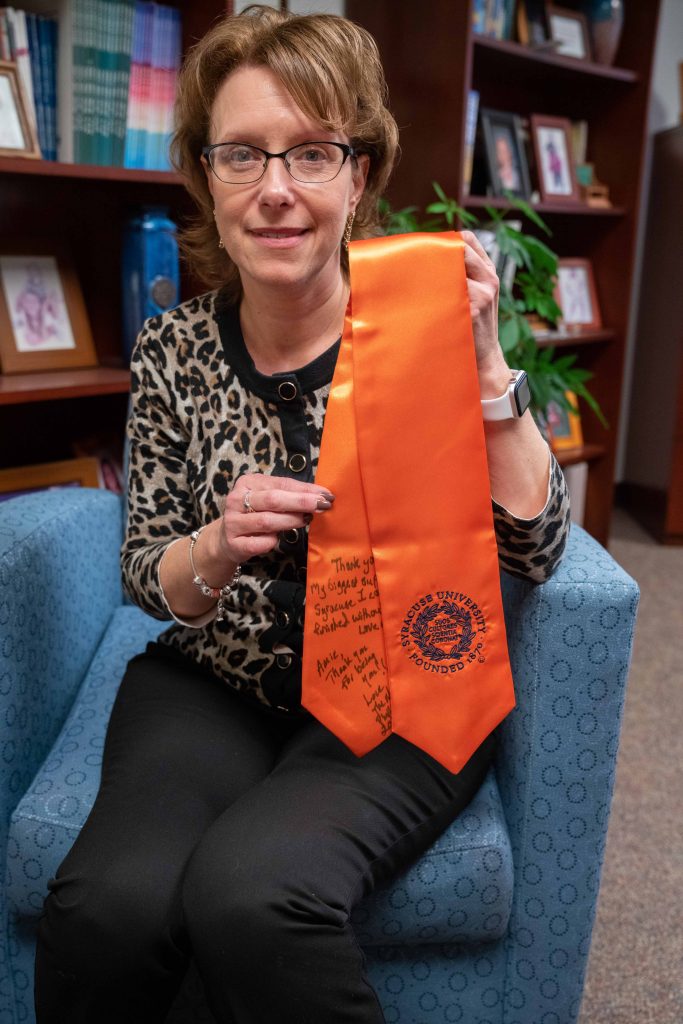 Amie Redmond displays a stole presented to her last May by a graduating student whom she had helped through a family tragedy. Written on it are messages from the student (“Thank you for being my biggest support at Syracuse. I couldn’t have finished without you.”) and the student’s mother (“Amie, thank you for being you.”).

“She gave me a stole of gratitude,” Redmond says, displaying the orange fabric, which students wear at graduation and bestow on a person who had an impact on their success. “I will be proud to now wear this stole of gratitude at every graduation from now until I retire.”

Redmond takes a holistic approach to supporting her students. “I often work with students who have lost a parent, have had some kind of loss in their life,” she explains. “I work with students and families and help the student get to a good place academically, socially and emotionally–because it’s all a package. A student can do well academically if they feel like they’re being supported in other ways.”

Redmond’s title can intimidate students, but she encourages them to not be deterred by it. “I think the most challenging part of my job is to initially help a student,” she says. “My title can be daunting. For many students, it’s like going to the principal’s office. And so to help students understand that going to this principal’s office is, in the end, a real positive thing for them—that’s a challenge.”

Establishing personal connections with students is part of a strategy for Redmond. She wants to be viewed as a resource for families as well. During Syracuse Welcome, Redmond hosts an information session/Q&A for family members who are dropping off their son or daughter. During the session, she hands out her business card and tells several stories about parents who have had to use it.

This year, she mailed a business card to families with a letter about her role and how she can help with their son or daughter’s transition to living outside their childhood home.

“If they ever have any concerns or issues, I ask them to reach out to me so I can help them problem solve,” Redmond explains.

The business cards establish a line of communication. The ability to connect becomes a valuable resource when students are in trouble.

Last semester, Redmond’s daughter was hospitalized due to an illness. At the same time, a first-year student was hospitalized. Even with her personal obligations, Redmond spent a good deal of time visiting the student and his family in the hospital. Redmond looks at hospital visits as part of her normal responsibilities to students and their families. She represents the University’s commitment to students, being present when in the hospital or waiting bedside while the family is en route.

Ultimately, the best course of action for that particular student was to take a brief leave of absence. Redmond maintained contact with the student and his family, and her dedication inspired the hospitalized student’s parent to attend the information session/Q&A and talk with the families of first-year students. The parent emphasized the importance of using the business card to contact Redmond and how supportive Redmond was of his child and their family.

“Big Syracuse University gets very small when you have a point person that you can reach out to and help guide you through those difficult situations,” Redmond says.

Administrative Assistant Carol Dewitt has worked with Redmond for seven years. She has witnessed firsthand how much parents appreciate the direct line of communication with Redmond.

“Parents say, ‘Oh, I never thought I would have to use this [business card], but I’m using it now,’” Dewitt says. “She’s a genuinely caring person. She really cares about students, and it’s so apparent in everything that she does.”

“To me, what makes this office successful is that I help out and support all the different areas, and, if need be—and I have had to do it—I can step in and do that job,” she says.

Dewitt says Redmond is equally supportive of her staff.

“She really takes an interest, professionally and personally, in the staff members in our office, and that’s nice to have,” Dewitt says.

Redmond is respected for her ability to solve problems.

“She asks good questions and listens carefully,” Masingila says. “She then draws on her knowledge and experience to work toward viable solutions.”

Redmond finds fulfillment in students’ achievements. “I’ve been the assistant dean for 19 years. And to see students’ successes from freshman year to walking across that stage at graduation—with a little bit of support and guidance that I may have given along the way to help that student get from one place to the other—that’s why I do what I do,” she says.