Lewis will address “Chicago and the Black Arts Movement” from 5-7:15 p.m. today in the Peter Graham Scholarly Commons (114 Bird Library). The event is free and open to the public.

For more information, contact Casarae Gibson, assistant professor of AAS in the College of Arts and Sciences (A&S), at clgib100@syr.edu or 315.443.4426.

“Professor Lewis will discuss the significance of the Black Arts Movement [BAM], which refers to a group of politically motivated black artists, writers, dramatists and musicians who flourished between 1965 and 1975,” says Herbert Ruffin, associate professor and chair of AAS. “The movement was particularly strong in Chicago, where organizations such as Third World Press [the largest independent, black-owned press in the United States] helped establish a new ‘black aesthetic’ through culturally progressive and politically charged publications and activities.”

He has written extensively about American literature; masculinity; African American studies; and popular culture, including music and sports. His books include “Conversations with Toni Cade Bambara” (University Press of Mississippi, 2017) and “Ballers of the New School: Race and Sports in America” (Third World Press, 2010).

“He is interested in a range of topics, from diversity in positions of power and leadership to racial stereotypes sustained in contemporary culture,” says Gibson, adding that Lewis earned a Ph.D. in English from Saint Louis University.

She considers BAM one of the most important chapters in African American history. In addition to laying the foundation for modern-day spoken word and hip-hop, BAM inspired the black studies movement, leading to the formation of academic programs, departments, centers and institutes across the country. 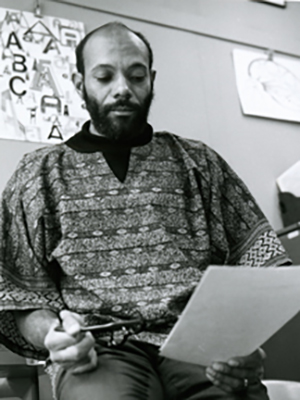 AAS, in fact, owes its existence to the black studies movement, when, in 1968, a group of students peacefully demanded the University to offer courses about the intellectual, historical and cultural contributions of African Americans. Syracuse responded in 1972 by establishing an AAS program, which grew into a department seven years later.
“The protests also set the stage for the Martin Luther King Jr. Library and the Community Folk Art Center, founded in 1971 and 1972, respectively,” she adds.

This year is considered the 50th anniversary of the black studies movement.

The John L. Johnson Lecture takes its name from a Syracuse faculty member who chaired the committee to organize an AAS program, became its first director and was appointed assistant provost for minority affairs. Johnson, who joined the A&S faculty in 1966, also helped retain scholarships for the “Syracuse 8,” a group of African Americans unfairly dismissed from the University’s football team in 1970. He left Syracuse the following year to become associate superintendent of schools in Washington, D.C.