Odds of Perfect Bracket Are 1 in 9.2 Quintillion, so Why Do We Play? 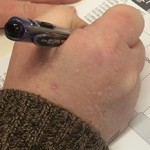 Millions of Americans fill out their brackets for the annual NCAA men’s basketball tournament.

The odds are, quite frankly, astronomical. If you are sitting down today to fill out your NCAA bracket, know this: the odds of getting it 100 percent correct are 1 in 9.2 quintillion (a number string 19 digits long). But yet many of us still play, and there’s good reason for that.

“Usually because the cost to enter is low (or free) and many sports fans think they are experts despite possibly never having seen more than five of the teams in the tournament play,” says Rick Burton, the David B. Falk Endowed Professor of Sport Management in the Falk College. “They can have their favorite team win it all, and they get to think about miraculous upsets that might make them the one to beat the odds.”

As for claims of lost work hours due to the tournament, “I don’t believe businesses suffer a true loss of productivity,” says Burton, “If anything, the tournament may bond office staffs as they compare notes and follow each other’s respective performances in filling out brackets. By now, one would expect that most bosses of large staffs understand how meaningful the NCAA tournament is to their employees.”

Burton says in this information age, it’s actually getting harder, not easier, to pick the winners. “There was a time when dynasties like UCLA were very predictable, but today the perception of parity exists and that means any number of teams have a real chance.”

So, as 60 million of us begin the process of deciding who will advance in the field of 64 to the field of 32, then to the Sweet 16, the Elite 8 and the Final Four, Burton believes the process is a little art, and a little science.

“For the majority of people it is an art, and generally bad art,” says Burton. “For a few it is unpredictable science. Either way, it’s a pleasant distraction wrapped up in the belief that America’s student-athletes are doing something they love and creating a big sporting event in March when the pro leagues are not playing particularly meaningful games.”