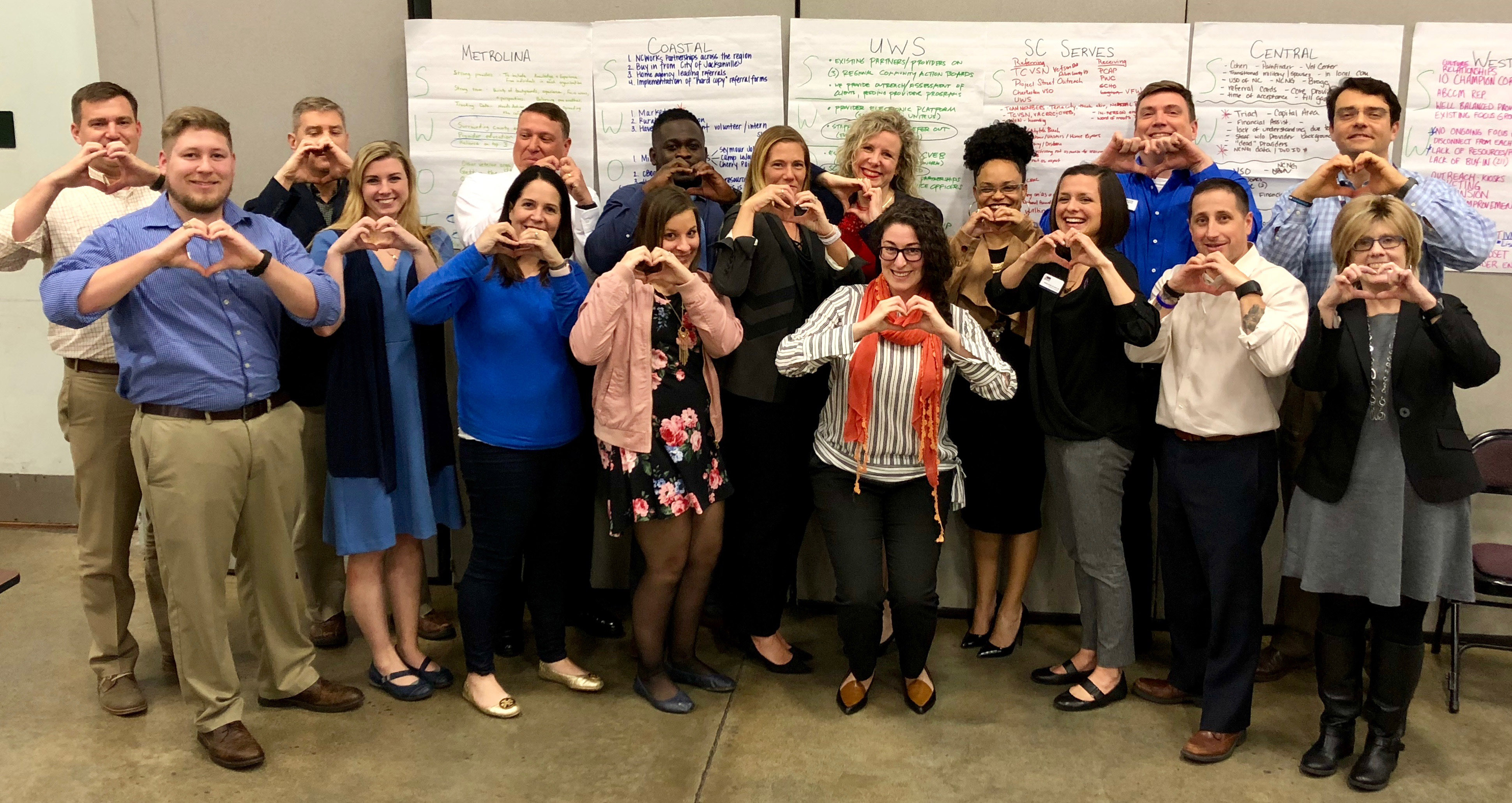 The recurring theme throughout Gilly Cantor’s life and career is duality. She says she’s not satisfied unless she’s using both sides of her brain at the same time (the creative side must operate in tandem with the numbers side). And in her current job, she says she wears two hats. As for language, Gilly says: “I speak human, and I speak data.”

It is that duality that defines Cantor’s contribution and service to veterans and military families around the nation. As program evaluation manager for the Institute for Veterans and Military Families (IVMF) at Syracuse University, she oversees the evaluation and strengthening of AmericaServes, a nationwide network of service providers that ease the transition of veterans into civilian life.

“I am part of our evaluation and analytics team, but I also have the privilege of being out in the field alongside my counterparts on the programs team, meeting the very people we serve, the people behind the numbers,” Cantor says. “Together, we support more than 875 health and human service providers who have undertaken a coordinated care model in 17 unique communities across the country in order to improve the delivery of services and resources to the military-connected population.”

Since 2013, the IVMF has been working alongside providers, funders and communities around the United States to establish the AmericaServes initiative and transform the delivery of services, resources and care to the nation’s veterans, service members and their families. 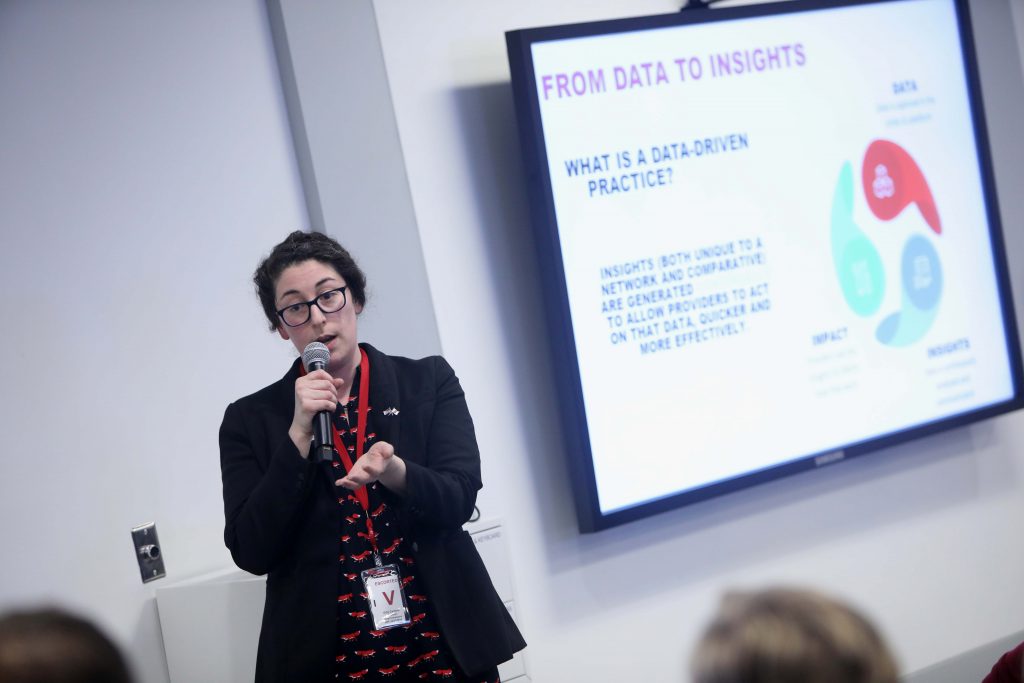 “Unique to this work is the program evaluation that informs practice and outcomes,” says IVMF Chief Operating Officer Maureen Casey. “Gilly has been responsible for building the evaluation framework and reporting—both nationally and for all of the communities. She has also partnered with the program management team to write extensively on this groundbreaking work. The model she has built has served as a template for our other programs and services.”

Cantor’s work—and the team’s dedication—has put Syracuse University on the map in cities and rural communities around the country: from Seattle to San Antonio, from Asheville to New York City, the folks on the front line of helping returning vets appreciate the impact of IVMF research.

For example, ending veteran homelessness has been a major focus for many communities and states. But the key factors that contribute to the problem are complex and differ from city to city. IVMF research and the ability to analyze public and proprietary data sets can help each community understand the services needed by veterans to reduce the incidence of homelessness in their particular area. It isn’t good enough to just provide a place to sleep. It might require providing legal services to prevent eviction or employment services to ensure long-term stability.

Cantor and her team rely on an interactive dashboard, created and managed in partnership with Syracuse University School of Information Studies (iSchool) students, to provide the flow of data that offers up-to-date insight into each community.

iSchool alumna Ishani Jariwala G’17 was one of those students who helped create the dashboard. “The IVMF had a lot of data—internal as well as public—and I thought the best way to utilize this data was to visualize it for the public to access it,” she says. “It is a great feeling to have helped so many people across the country to voice insights about veterans and to help solve important issues pertaining to their transition back into civilian life.” Jariwala is now using skills she developed at Syracuse University as a senior associate in data analytics for Ernst & Young, LLP.

“We are essentially helping data-nerds all over the country,” Cantor says. “We are feeding their passion for having evidence-based processes and programs that are truly impactful.” 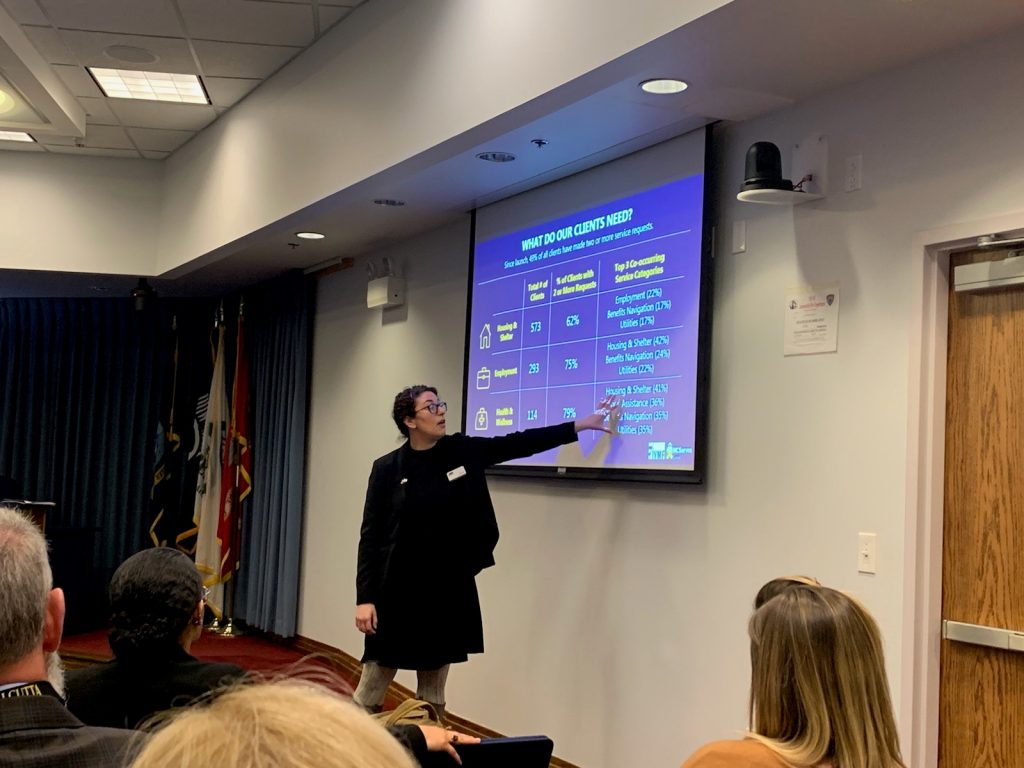 Gilly Cantor sharing data with the community about how NCServes networks came together in response to Hurricane Florence at the NCServes-Coastal 2-Year In-Practice Review in Jacksonville, North Carolina.

Political and civic leaders have come to rely on the data as they develop services in their communities. For example, at each meeting of the North Carolina Governor’s Working Group on Veterans, Service Members and their Families there’s a standing agenda item to report new data-informed insights from Syracuse University’s dashboard. Through their collective efforts, veteran homelessness in the state has been reduced by about 14 percent year over year.

Cantor keeps in touch with “faithful data champions” working in all AmericaServes locations. “These data evangelists, as I’ve taken to calling them, vastly extend the impact of our data deep into communities and all the way back out and up to state governments and beyond,” she says. “They rely on us to provide them an individualized dashboard each month, summarizing their progress across key performance indicators. Additionally, I create tailored visualizations that encapsulate just the data for a particular community, or custom analytics about a particular demographic, service domain or general topic.”

Looking back, Cantor can now connect the dots between her undergraduate experience, as a dual major in the history of art and architecture and architectural studies at Brown University, her graduate work in public administration at the Maxwell School and her current work. “In architecture, it wasn’t just about the buildings,” she says. “It was about how people move through space, how they exist in an urban environment, and how we can make cities more accommodating to the needs of people.” Her work at IVMF and with its partners around the country is ultimately about helping communities meet the needs of diverse populations.

“People around the country know Syracuse University because of this work,” Cantor remarks proudly. “We have become a trusted resource.” She considers this work an investment—not only in those who have served in the military, but in citizenship and democracy.

“As someone who didn’t serve in the military, I’m doing my best to contribute to part of what makes our country function,” Cantor says. “There’s a lot of talk about the military/civilian divide. But military families live in communities all across the country. And when veterans return from service, they become part of those communities. Their successful transition is not only good for them, it’s good for all of us.”