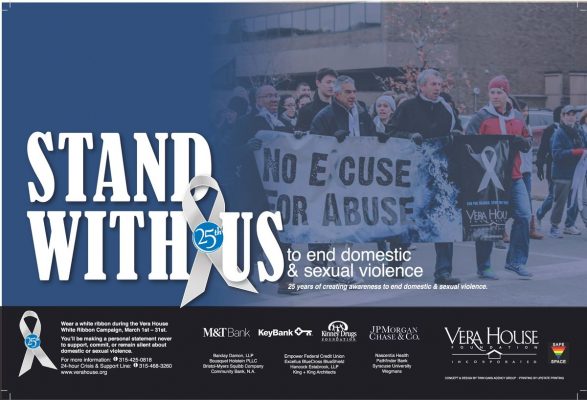 March marks the 25th anniversary of the Vera House White Ribbon Campaign. Throughout the month, the University supports the campaign in raising awareness about domestic and sexual violence. The University launched its campus campaign on Wednesday, Feb. 20, at the Syracuse-Louisville men’s basketball game. Members of the campus community, including the Interfraternity Council (IFC), the Office of Health Promotion (OHP) and the Counseling Center, gathered to support Vera House and kick off the campaign.

Community members volunteered at the Dome to fundraise and raise awareness about interpersonal violence. Nearly 60 members of IFC chapters volunteered by handing out wristbands and collecting donations. They distributed over 3,500 bracelets and collected more than $1,700 to support Vera House education and awareness programs and services. Prior to the game and during half time, OHP and the Counseling Center joined Vera House in the backcourt to offer game attendees giveaways and various information about on- and off-campus programs and resources.

For the past five years, Syracuse University has held a pre-launch for the Vera House White Ribbon Campaign at a men’s basketball game. This partnership began through the leadership of Bridget Yule, director of Student Centers and Programming Services and member of the Vera House board of directors. 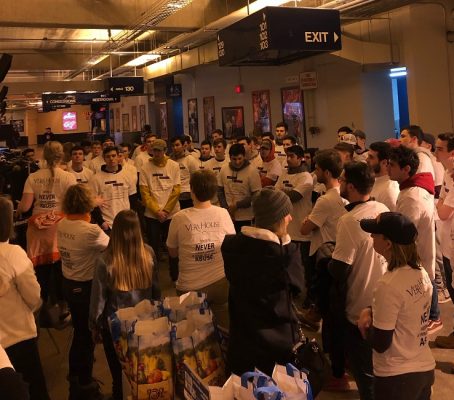 Community members volunteered at the Syracuse-Louisville men’s basketball game at the Dome to fundraise and raise awareness about interpersonal violence.

“When this idea came about five years ago, so many in our campus community came together to make this a reality. It has been a privilege to work with Vera House and our students, faculty and staff to launch the White Ribbon Campaign on campus in such an impactful way and demonstrate our community’s commitment to standing against domestic and relationship violence,” says Yule.

The Vera House White Ribbon Campaign is an initiative led by men and encourages all members of the community to unite to end sexual and relationship violence. Throughout the month of March, thousands of Central New York community members wear a white ribbon or white wristband to raise awareness about domestic and sexual violence. By wearing a white ribbon or wristband, community members demonstrate their support and commitment in ending violence.

To show support, students, faculty and staff can purchase wristbands, lapel pins or chocolate bars by contacting Yule at bmyule@syr.edu or Denise Dowdall at ddowdall@syr.edu. Community members can also show their support by using #StandWithVeraHouse and #IWill on social media, adding their name to the campaign pledge and attending the White Ribbon Campaign Walk on Friday, March 29, at noon in Clinton Square. Additional details are available on the White Ribbon Campaign webpage.