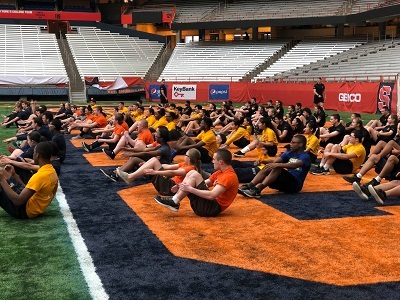 “The JROTC fitness challenge is a great opportunity for current and future cadets,” says Lieutenant Colonel Jason Warner, Army ROTC at Syracuse University, speaking of his cadets. “These students are cadets today but soon they will be the leaders in our military force. We are proud to be part of a school that values and prioritizes military service.”

The event kicked off with a presentation from Syracuse admissions representatives to educate JROTC cadets on different education paths beyond high school through the ROTC program, including scholarship opportunities and support the University provides.

The challenge involved a number of physical fitness tests, including running, push-ups, sit-ups, running the Dome stairs and a dead-man carry across the turf using a 105-pound dummy.

Throughout the challenge, SU ROTC cadets demonstrated the leadership skills attained through the ROTC program as they guided and encouraged teams of junior cadets to finish the competition strong.

Warner ended the ceremony by awarding the first-, second- and third-place teams and their respective Army ROTC leaders. Cadets who showed qualities that matched the values of the Syracuse ROTC program, such as leadership, strength, teamwork and a commitment to serve, were identified as their team’s Most Valuable Player (MVP) and awarded a Syracuse University ROTC coin.

The JROTC fitness challenge is another example of Syracuse University’s commitment to veterans and the military-connected community. Established in 1919, Syracuse University boasts the longest consecutively running ROTC program in the country.