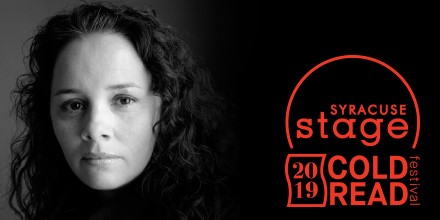 All plays were once new plays. That’s the idea behind Syracuse Stage’s Cold Read Festival of New Plays. Now in its second season, the Cold Read festival has five different events featuring some of the freshest voices writing for theater today, both nationally and locally, scheduled for Thursday, March 7, through Sunday, March 10.

Curated by Syracuse Stage Associate Artistic Director Kyle Bass, each festival event takes patrons through a different portion of a play’s development process from the writer’s mind to the stage.  Tickets for each event are $5 and a full weekend pass for all five events is $20. Visit www.syracusestage.org or call Box Office at 315.443.3275 for tickets and additional information.

“I firmly believe that theater would be a stale museum if not for new plays by both new and established playwrights,” says Bass. “I wanted to give Syracuse Stage a toehold in new plays. It doesn’t cost much to demystify new plays and I hope by the fifth year, we will have a world premiere of one play every season.”

Cold Read kicks off on Thursday evening with a reception followed by a reading of “All in the Timing” by David Ives, a “maestro of the short-form,” according to The New York Times. Syracuse Stage Artistic Director Bob Hupp will direct theater trustees and community leaders in a presentation of this collection of six plays, which offer up a mix of comedy and drama centered around themes of language, existentialism and romance. It’s a party with a script thrown in.

Friday night’s event, “Under Consideration,” will feature a cast of professional actors in a reading of “Admissions,” a new play by Joshua Harmon that is under consideration for production in a future Syracuse Stage season. Harmon is well known for “Bad Jews,” which was nominated for Best New Play by the Off Broadway Alliance in 2014. “Admissions” is a satirical play that explores the values and contradictions of liberal white America. The reading will be directed by April Sweeney, theater director at Colgate University.

Next up on Saturday morning is a new addition to the Cold Read Festival, “Write Here,” highlighting the work of a local playwright. “The Picture of Oscar Wilde” by Tanner Efinger will be read by a cast of local actors and directed by Bob Hupp. Efinger is the artistic director of Breadcrumbs Productions and co-owner of Wunderbar, a new queer bar and theater in Syracuse. He has scripted several works such as “A Christmas Carol Retold” and “High as Sugar” among others.

Saturday afternoon and evening, the stage shifts to the Near Westside’s SALTSpace for a workshop presentation of the work-in-progress “The Spanking Machine” by renowned comedian and solo artist Marga Gomez, directed by Adrian Alexander Alea. GLAAD Award winner and original member of the Latino ensemble “Culture Clash,” Gomez has acted in Off-Broadway and national productions of “Vagina Monologues” as well as in movies like “Batman Forever.” There will be two showings of Gomez’s show at 3 p.m. and 7:30 p.m. Please note, “The Spanking Machine” contains mature themes and adult language.

To close Cold Read, Syracuse Stage brings you “Draft/Pages” with local craft brews by Empire Brewing Company to sip on and a reading of “The Dakota Project” (working title), a work in progress by one of the hottest playwrights Larissa FastHorse, of “The Thanksgiving Play” fame. Melissa Crespo, who directed Syracuse Stage’s recent production of “Native Gardens,” will direct a cast of professional actors. “Draft/Pages” includes a moderated talkback with FastHorse following the reading.

In its commitment of supporting playwrights and the development of new work, Syracuse Stage also announces its partnership in Playwrights Welcome, a new program which offers available tickets to theater for Dramatists Guild of America Members on the day of a performance, free of charge. Playwrights Welcome was developed by Samuel French along with Dramatists Play Service, Dramatic Publishing, Music Theatre International, Playscripts and Rodgers and Hammerstein. For more information on this national program, please visit samuelfrench.com/resources/playwrights-welcome.

Playwrights Welcome tickets are available in person at the Syracuse Stage Box Office. Note that writers must present their Dramatists Guild membership card when obtaining a ticket.