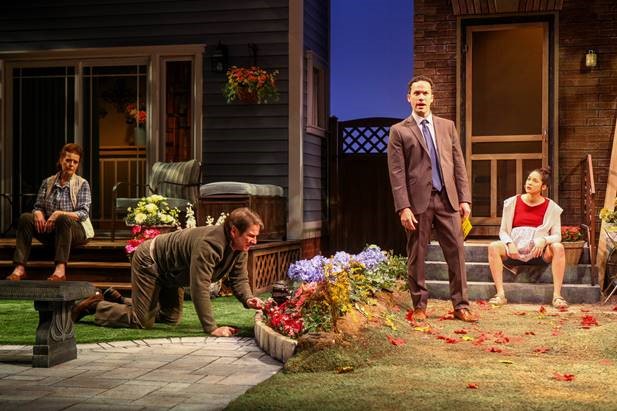 The season will be preceded by an off-subscription production, the world premiere of “Thoughts of a Colored Man,” by Keenan Scott II and directed by TV, stage and film actor Taye Diggs ’93. The play runs Sept. 4–22, 2019. The Cold Read Festival of New Plays returns for a third season with Octavio Solis as playwright-in-residence working on a new play and nationally recognized poet Charles Martin represented by his new translation of “Medea.”

In announcing the season, Syracuse Stage artistic director Robert Hupp says, “We’re crafting a season of plays and musicals that celebrate diverse and powerful voices. Our 47th season brings to life rich stories that entertain and delight; it’s a poignant season of love and loss, of justice and jealousy. We sought works that make you stand up and take notice. Hot off the press or written more than 60 years ago, set in a mid-century courtroom, an 18th -century royal court, a fantastical beast’s castle, an Irish bar or a fitness studio, the plays and musicals of our new season were chosen because they tell exciting stories you won’t see, hear or feel anywhere else. And they’re brought to life by amazing actors, directors and designers who’ll conjure all the magic you’ve come to expect from a season at Syracuse Stage.”

Adapted by Reginald Rose from his 1954 teleplay, “Twelve Angry Men” is a taut drama that unfolds as a jury deliberates following the trial of a teenager accused of murdering his father. Initially, conviction seems certain. One holdout among the 12 complicates the path to a swift verdict by insisting on careful examination of the evidence, which slowly raises reasonable doubt and simmering tensions among the jurors. With a young man’s life in the balance, prejudice, passion and human failings collide in the search for truth. Playwright/director James Still directs “Twelve Angry Men,” which Syracuse Stage will co-produce with Indiana Repertory Theatre. A star-studded film adaptation was released in 1957.

Director Donna Drake returns to Syracuse Stage for her third consecutive holiday musical with “Disney’s Beauty and the Beast.” Previously, Drake directed “The Wizard of Oz” and “Elf The Musical.” Co-produced with the Syracuse University Department of Drama, the show will feature spectacular flying effects, sumptuous costumes and lavish sets as befit this beloved family favorite. The story of how young Belle helps the Beast break an evil spell and resume his former state as a prince is adored the world over with its timeless theme of the importance of knowing how to love and be loved.

Nine 16- and 17-year-olds make up a girls indoor soccer team in “The Wolves.” Over a series of wintry Saturdays on an AstroTurf indoor field somewhere in suburban America, the team members perform their ritual pre-game warm-up. Between stretches and pep talks, cajoling and consoling, jokes and jibes, an eye-opening and sympathetic portrait of nine young women emerges, revealing their complexities and confusions as they grapple with issues large and small, near at hand and far away. Through precisely orchestrated cross talk, crisp overlapping dialogue, and some pretty nifty footwork, playwright Sarah DeLappe celebrates these young women as independent individuals: athletes, scholars, daughters, students and friends. A favorite of New York critics and a hit with audiences at Lincoln Center, “The Wolves” is one of the most produced plays in the country. “The scary, exhilarating brightness of raw adolescence emanates from every scene of this uncannily assured first play,” wrote The New York Times.

Following his acclaimed performance in “The Curious Incident of the Dog in the Night-time” (2017), Mickey Rowe returns to Syracuse Stage to take on the role of musical genius Wolfgang Amadeus Mozart in “Amadeus,” directed by Hupp. Written by Peter Shaffer (“Equus”), “Amadeus” delightfully mixes history and mystery in an imaginative exploration of artistic rivalry in the extreme. On Dec. 5, 1791, Mozart died at the age of 35, cause of death “rheumatic inflammatory fever.” But was the cause of the cause natural? Borrowing from a play by Alexander Pushkin, Shaffer places rival composer Antonio Salieri as prime suspect in the death of the “obscene child” with the preternatural ability. Is there a clue in Salieri’s final composition: “The Death of Mozart–or, Did I Do It?”

“Amadeus” enjoyed immense success in London and New York when it was first produced in the late 1970s and early 1980s. It took the Tony Award for Best Play in 1981. The 1984 film, directed by Milos Foreman, earned the Academy Award for Best Picture and earned F. Murray Abraham Best Actor for his portrayal of Salieri. There have been numerous successful revivals, including recently at its original home The National Theatre in London. Syracuse Stage produced it in 2003 under the direction of Michael Donald Edwards. For the 19/20 production, Syracuse Stage will partner with Symphoria to present a series of related musical events.

“‘Amadeus’ has it all: it’s a murder mystery wrapped in a human drama about genius and jealousy; it’s a theatrical tour de force that is as delicious as the delectable Italian confections that haunt Salieri’s dreams,” Hupp says. “I’m thrilled that one of our favorite actors, Mickey Rowe, will return to give life to Mozart, the L’Enfant terrible at the center of our story.”

With a book by the brilliant Irish playwright Enda Walsh, it is no surprise that the Broadway musical adaptation of “Once” was nominated for 11 Tony Awards and won eight including Best Musical, Best Actor and Best Book in 2012. A year later it also won the Grammy Award for Best Musical Theatre Album. “Once” started as a charming independent film about a jaded Irish busker on the verge of abandoning his songs and a young Czech émigré who rekindles his passion for music and his desire for life and love. Glen Hansard and Markéta Irglová took Best Song at the 2008 Academy Awards for “Falling Slowly.” On stage, their story springs to life with the spirit and energy of a lively pub music session as the performers serve as cast and band. A tender and surprising love story combines with great songs in a warmly affecting show that understands the power of music to move the human heart.

The season closes with comedy and the East Coast premiere of “Yoga Play,” also directed by Hupp. Written by Dipika Guha, “Yoga Play” joyfully skewers that holy grail of marketing directors the world over—authenticity. When the new CEO of high end Jojomon athletic wear (think of something that ends with citrus) learns that their prized lavender scented yoga pants are being made by a manufacturer accused of using child laborers, she goes into full damage-control mode and commences a search for a real-deal, reclusive and revered yogi to salvage the company’s image. She succeeds in finding him, but he is not quite what she expected. The fall-out proves fertile comic fodder for Guha, who is a rising star and was recently awarded a Venturous Playwright Fellowship by The Lark.

“It’s fun to pack surprises into our season and ‘Yoga Play’ is just that: a delightful new comedy to wrap things up,” Hupp says. “Funny, yes, but right on the money, too, as playwright Dipika Guha turns the fitness industry on its ear. You don’t have to be into yoga to relish this send up of the ‘authenticity’ industry.”

Directed by renowned artist Taye Diggs, and written by Keenan Scott II, one of today’s boldest new voices, “Thoughts of a Colored Man” blends language, music and dance into a daringly universal new play. Welcome to the vibrant inner life of being Black, proud and thriving in the 21st century. Set over a single day, this richly theatrical mosaic goes beyond the rhythms of the basketball court and the boisterousness of the barbershop. It sheds brilliant light into the hearts and minds of a community of men searching for their most triumphant selves. And what they reveal are the deeply human hopes, dreams, fears and sensitivities of all men, all people.

As playwright-in-residence at the third annual Cold Read Festival of New Plays, renowned Latino playwright Octavio Solis will share a draft of new work in progress. Solis has written more than 20 plays and has been produced at more than 25 theaters nationwide, including Yale Repertory Theater, Mark Taper Forum, Denver Center Theater and the Oregon Shakespeare Festival. His memoir “Retablos: Stories From A Life Lived Along The Border” was released in October 2018 and recounts his childhood in El Paso, Texas. Solis served as a cultural consultant on the Disney Pixar film “Coco.”

“Writing the American story through a Mexican-American lens, Octavio Solis has been a singular poetic and daring voice in the American Theater for more than 20 years,” said Syracuse Stage Associate Artistic Director and Cold Read curator Kyle Bass. “I’m thrilled to bring his necessary voice, exciting new work and generosity of spirit to Cold Read.”

Martin, who features as the local author in Cold Read’s “Write Here” presentation, lives in Syracuse and is the author of eight books of poetry. His new translation of Euripides’ “Medea” has been published by University of California Press.