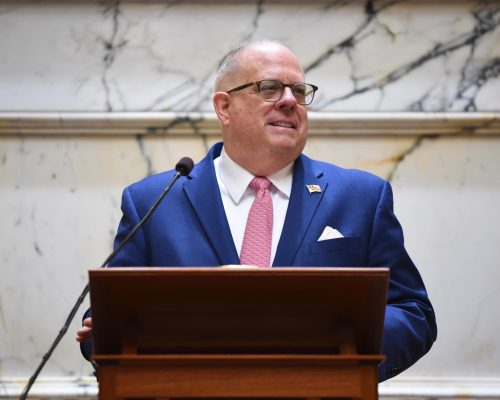 Maryland Gov. Larry Hogan will be the keynote speaker at the award ceremony for the Toner Prize for Excellence in Political Reporting on Monday, March 25, in Washington, D.C.

The Toner Prize, sponsored by the Newhouse School, honors the life and work of late alumna Robin Toner ’76, the first woman to be national political correspondent for The New York Times.

Hogan is being courted by Republican critics of Donald Trump to mount a primary challenge to the president in 2020. He has managed to remain popular with Marylanders across the political spectrum with a job approval rating of 69 percent in recent polls.

Hogan has presided over record job growth in Maryland, directing $25 billion to local K-12 education and committing $4 billion to restoration of the Chesapeake Bay. He has supported investments in the state’s transportation infrastructure, including the $5.6 billion Purple Line light rail project in Montgomery and Prince George’s counties. He was the first governor in the nation to declare a full-scale state of emergency in response to the opioid crisis. In 2018, he was elected vice chair of the National Governors Association.

Prior to his election, Hogan spent more than 25 years building and running small businesses in the private sector.

This year’s winner will be announced at the ceremony next month.

Toner graduated from Syracuse with dual degrees in journalism and political science. She started her journalism career with The Charleston Daily Mail in West Virginia and reported for The Atlanta Journal-Constitution before arriving at The Times in 1985. She was married to journalist Peter Gosselin and was the mother of now 21-year-old twins, Nora and Jacob.

The late U.S. Sen. Edward M. Kennedy described Toner as “a reporter’s reporter who deeply cared about the people and the issues she covered.”

The event will begin at 6 p.m. at the Center for Strategic and International Studies, 1616 Rhode Island Ave. NW, Washington, D.C. Tickets and tables may be purchased online at cc.syr.edu/toner2019.