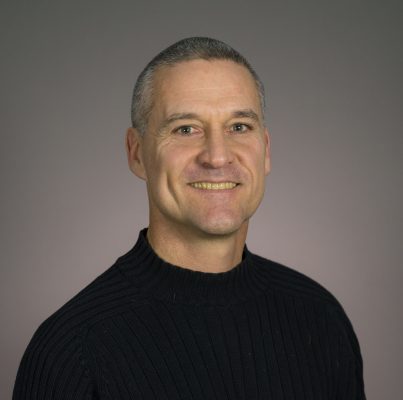 “My role is the guy who brings the arts into the science room,” says Stephen Cross, associate professor of acting in the College of Visual and Performing Arts’ Department of Drama, of his collaborative efforts with Upstate Medical University and the Syracuse VA Medical Center. As artistic director of Building Company Theater, Cross has created original theater works that address the difficulties medical residents endure in their training. The company administers Cross’ research project, Education Through Theater Arts (ETTA), a program he began in the early 1990s in his native Nova Scotia, Canada.

“The company I founded there, the Irondale Ensemble Project, was a group of artists who created theater exercises that could be transferred to non-theater social service organizations,” he says.

Cross brought that concept with him when he came to Syracuse University a dozen years ago and has since worked with numerous local organizations, including the Onondaga County Justice Center, Oasis Senior Center, city and rural school districts, and refugee and migrant worker advocacy centers.

“Dr. Knohl contacted me because he was interested in using the arts in his program as a way to improve the medical residents’ communication skills,” Cross says. “It was a perfect, ready-made fit.” 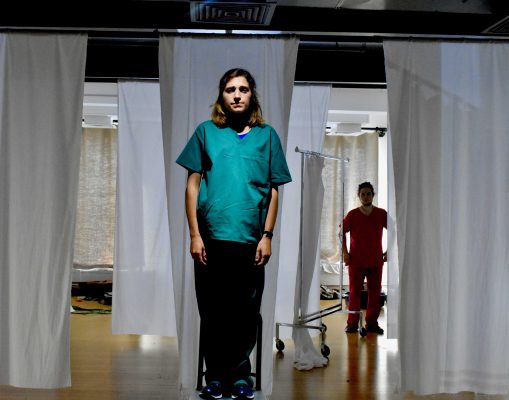 “While it’s challenging to solve problems in a game format, the residents find it refreshing—they relax, breathe, tap into their creative personality,” Cross says. “They have a genuine, empathetic desire to save lives, reduce pain, extend life.”

Collaborating with Cross are Kay Frank, Upstate’s program researcher, and Sue Henderson-Kendrick, the medical center’s director of graduate medical education. The ETTA program will garner national visibility when featured in a poster presentation given by Frank at the Innovations in Medical Education Conference in Los Angeles and at the American Council for Graduate Medical Education Conference in Orlando, Florida.

The latest Building Company Theater play, “Prognosis: Poor,” which depicts the sometimes difficult realities faced by medical residents, is a direct result of the ETTA/Upstate collaboration. Two years ago, the outreach expanded to include resident doctors serving at the VA Medical Center. One of the developments there has been the “Military Monday Radio Hour,” a 45-minute theater work designed to sensitize medical residents to the specific needs of those who have served or are serving in the military.

For all of the productions, Cross writes the scripts and drama department students play various roles. As many as nine students participate in ETTA during the academic year, and for some, the experience has led to changed career aspirations.

“First-year students come into the performance program with their eyes set on Broadway, film, video or television,” Cross says. “Some find that competitive world is not necessarily in their nature and are drawn to work that has to do with community outreach. They see the possibility of a different career direction, like drama therapy or community engagement, because of their ETTA experience.”

Making the arts more accessible has always been Cross’s own career goal.

“My foundational belief is that the arts belong to everybody, not just in a certain space or venue,” he says. “The arts are a very human thing and belong everywhere.”