Department of Drama Production Investigates the Act of Storytelling 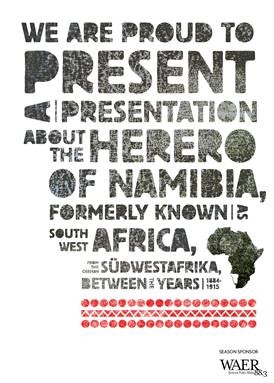 The Department of Drama continues the 2018/19 season with “We Are Proud to Present a Presentation About the Herero of Namibia, Formerly Known as Southwest Africa, From the German Sudwestafrika, Between the Years 1884–1915” written by Jackie Sibblies Drury and directed by Gilbert McCauley. The play runs Feb. 22-March 3 in the Arthur Storch Theatre, 820 E. Genesee St., Syracuse.

In “We are Proud to Present a Presentation . . .” a company of six actors gathers in a rehearsal room to create a theater piece based on the little-known story of the first genocide of the 20th century—the extinction of the Herero tribe at the hands of their German colonizers. Throughout the process, the actors are forced into difficult conversations as their personal histories, assumptions and prejudices collide with the demands of their storytelling.

McCauley, a visiting director from the University of Massachusetts, calls the play “a hybrid between devised theater and a straight play” that investigates the sensitivities and difficulties inherent in the act of storytelling itself. The form and structure give the actors the freedom to dig deeply into their characters. It is a play, he said, that “pushes people to think about things they have never thought about before.”

“We are Proud to Present a Presentation . . .” premiered at New York’s Soho Rep in 2012 and brought playwright Drury to national attention for creating a piece that “impressively navigates the tricky boundaries that separate art and life, the haunted present and the haunting historical past.” The haunted past in question is a particularly ugly though mostly forgotten chapter in German colonial activity in Africa.

During the years in the late 19th century when Namibia was a German colony, the Germans alternately favored one tribe, the Herero, over another, the Nama. But when the territory’s resources were drained by the building of a railroad into the interior, the Germans essentially began confiscating all the land from both tribes. When the Herero rebelled, an “extermination order” was issued and the remaining tribesmen were used as unpaid laborers.

In the play, the primary historical source upon which the actors draw for their material comes from letters written by German soldiers—those who caused the damage. The gap in the historical record greatly complicates the actors’ task, and therein lies the initial source of their friction, which escalates in the course of creating the story. How can they dramatize history when only half the participants have left behind a record? Along the way, Drury relieves the tension by including lighter moments that poke teasing fun at the impromptu games and exploratory exercises the actors employ to work their way into their material.

Drury squarely addresses the difficulties inherent in exploring and discussing difficult and uncomfortable topics. Part of the play’s success, as one critic noted, is that “in recalling a traumatic chapter of African history, it magnifies the biases and conflicts that are inextricably part of the act of remembrance itself.”