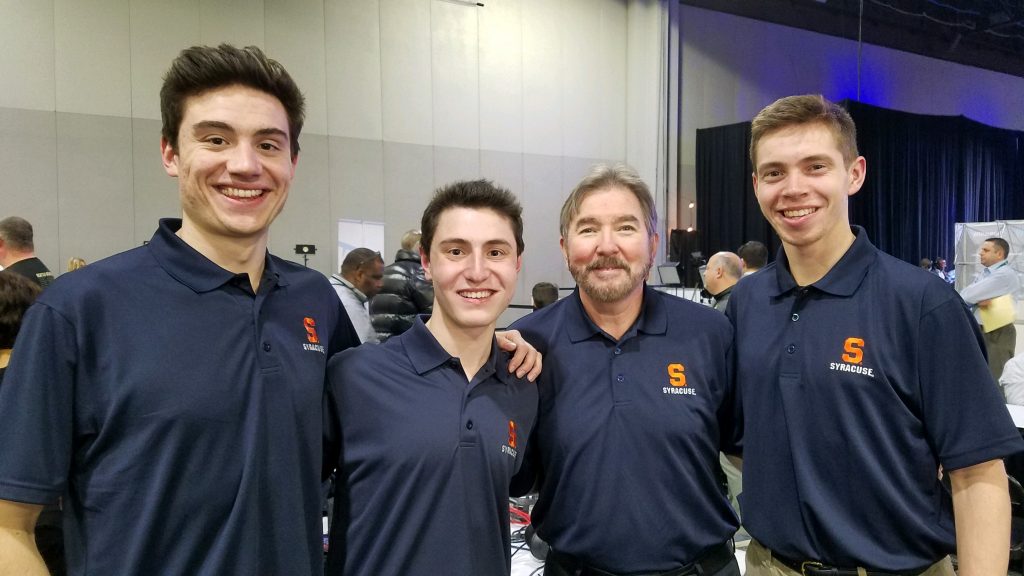 “It was a wonderful learning experience for three aspiring broadcasters,” says Dennis Deninger, a professor of practice in the sport management program at Falk College who organized the trip. “They have now covered the largest sporting event held each year in the United States, and they’re still undergraduates.”

Last year, in his popular course, The Super Bowl and Society, Deninger, a former longtime ESPN production executive, floated the idea of a Syracuse student team covering the Super Bowl’s Media Week in Atlanta. Karp was a student in the class, and when Deninger shared a slide of St. Bonaventure students covering the event in 2018, Karp spotted a high school friend and former broadcasting partner in the picture. It inspired him to approach Deninger and start working on a plan to attend the 2019 gathering.

Karp recruited Ajello and Carter, who had previously taken Deninger’s course, and all three had experience working together at the campus media outlets. With Deninger’s help, they secured media credentials from the NFL and created a game plan for the trip. “It’s cool to have your brainchild come to life,” Karp says. “At the same time, I wouldn’t have been able to do this myself.”

They arrived in Atlanta on Sunday, Jan. 27—a week before the Big Game—and set up shop on Radio Row, headquarters for all the sports talk radio shows, in the Georgia World Congress Center (GWCC). “Right between NBC Sports Radio and CBS Sports Radio,” Deninger says.

During the week, they did three hours of live sports talk daily for Z89 in the noon-to-1 p.m. and 10 p.m.-to-midnight slots. They also produced live broadcasts for CitrusTV and packages for WAER. All told, they rolled through 32 interviews, featuring numerous luminaries from the world of sports talk radio; producers and executives from CBS, the NFL Network, ESPN and Westwood One; NFL executives and players, including former Orange standout and Tampa Bay Buccaneers linebacker Cameron Lynch ’14; and even the host of “American Ninja Warrior.”

Most prominently, they tapped into the legendary Syracuse sportscasting network, landing interviews with the likes of Damon Amendolara ’01, Scott Hanson ’93, Sarina Morales ’08, Adam Schein ’99, Andrew Siciliano ’96 and Adam Zucker ’98. For the three Newhouse students, the interviews with Orange alumni were fun and rewarding. Karp, for instance, quizzed Schein, one of his favorite talk show hosts, about his notable slicked-back hair look. “People always talk about athletes playing through pain,” said Schein, who hosts shows on SiriusXM and the CBS Sports Network. “I’ve got to deal with my hair issues every day.” 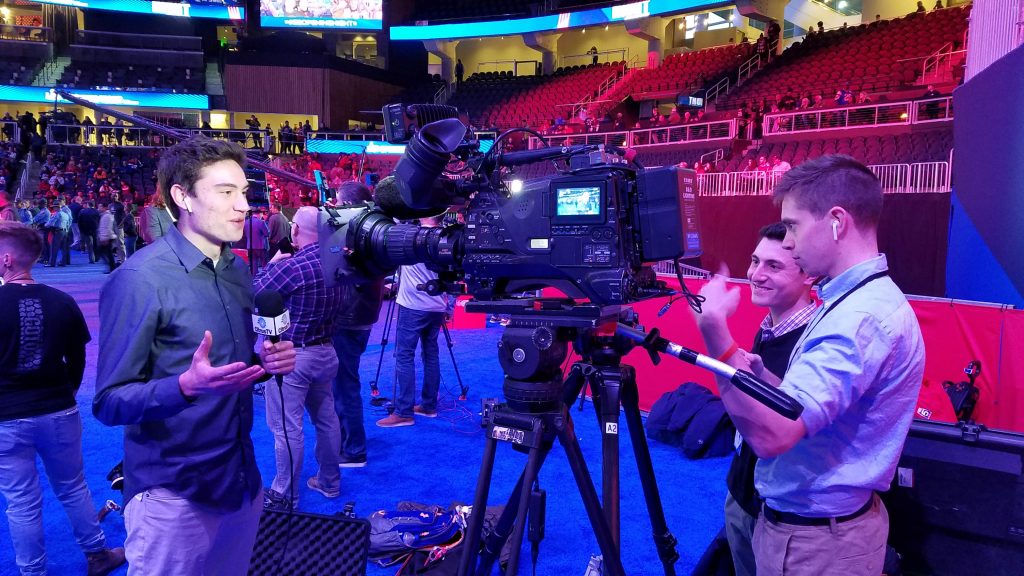 Drew Carter ’19 does a live shot for CitrusTV at Super Bowl Opening Night in the State Farm Arena in Atlanta. Behind the camera are Jonah Karp ’20 (center) and Jackson Ajello ’19. (Photo by Dennis Deninger)

For CitrusTV, Ajello caught up with Rams punter Johnny Hekker for a segment titled, “Punters are people, too,” and Carter hunted down Patriots special teams player Matthew Slater, who always calls “heads” for the Patriots on the coin toss. “I’ve got a quarter here. Can we do a little coin toss?” Carter asked, with Slater responding: “You know what I’m calling.”

Karp, looking to mine personal insights from players, posed humorous questions about such things as their preferred condiments on a hot dog and favorite karaoke song. “You have to have a little bit of confidence and a little bit of shoulder and get in there and ask people questions,” Deninger says. “That was a really good experience for them.”

The following night they attended the official media party put on by the Atlanta Super Bowl Host Committee at the Georgia Aquarium. One highlight was celebrity chef Wolfgang Puck serving up some extraordinary dishes, including Peking duck. “I liked everything,” Karp says. “Oh, my goodness.”

Later in the week, the trio explored the Super Bowl Experience, the NFL’s interactive theme park at GWCC, where they tested—and videoed—their skills in NFL Combine drills. “I’m not very athletic, at least compared to the other two,” Karp says.

Deninger turned to his network of connections to help arrange a visit to the CBS broadcast compound in the depths of Mercedes-Benz Stadium (they were chauffeured there in an eight-seat golf cart). Thanks to Brian Seeling ’03, an associate director of CBS Sports, they took in the preparation and action behind the scenes. They checked out the ESPN broadcast set and interviewed ESPN senior coordinating producer Seth Markman ’93. Deninger also connected them with his friend and former ESPN colleague Onnie Bose, now vice president of events for the NFL, and Mark Quenzel, NFL senior vice president in charge of all programming.

“They saw much more than if they were just sitting on Radio Row. They got to see so much of the effort and the planning—the sheer scope of coverage that goes into every year’s Super Bowl,” Deninger says. “Mark gave us insight into the machinations of halftimes and how the NFL integrates entertainment into the sports package.”

They were also thankful for all the Orange connections. Don ’89 and Rachel Vassel ’91, Syracuse University assistant vice president of multicultural advancement, hosted them throughout the week at their Alpharetta home. Howard Deneroff ’89, executive producer for Westwood One—which broadcast the Super Bowl on radio—reached out when they arrived on Radio Row and provided them with a free ethernet connection for their live broadcasts.

Deneroff also helped arrange an interview with Kevin Harlan, Westwood One’s play-by-play announcer. Karp considers Harlan the best in the business and appreciated the advice he offered: “Don’t care about the job you get right out of school. The more you do, it adds up. Do whatever you can to get in front of a microphone. Always be your own advocate. Listen to your tapes. Be honest with yourself.”

Solid advice. And since the experience counted as a one-credit independent study for Ajello, Carter and Karp, they will share their tales and insights in a presentation to Deninger’s Super Bowl class later in the semester. “The Super Bowl is so much more than a game,” Deninger says.