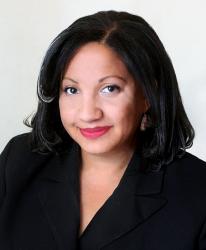 Sarah Glover ’96, president of the National Association of Black Journalists, will speak at the Newhouse School Feb. 25 as a guest of the Leaders in Communications Lecture Series. She will discuss how social media, storytelling and digital journalism propel and dominate the news cycle, and what skills newsrooms are looking for in the next crop of emerging journalists. The talk will start at 7:30 p.m. in the Joyce Hergenhan Auditorium, Newhouse 3. Follow on Twitter at #CommsLeaders.

Glover is the social media editor at NBC Owned Television Stations and is based in New York City. She previously worked at NBC10 Philadelphia (2012-14), Philadelphia Daily News (2008-12) and The Philadelphia Inquirer (1999-2008).

At the Daily News, Glover led the video team on the Pulitzer Prize-winning “Tainted Justice” series, which resulted in a federal investigation of the Philadelphia Police Department. She covered Pope Francis’ historic visit to the United States and documented his address to world leaders at the United Nations General Assembly in New York. She presented at the World Media Summit in Doha, Qatar, in 2016.

Glover has been a freelance photographer for two decades, and her work has appeared in Jet magazine, The Washington Post and Black Enterprise.

She graduated from Syracuse University with dual degrees in photojournalism from the Newhouse School and African American Studies from the College of Arts and Sciences.

Communication Access Realtime Translation (CART) will be available. For more information about the event, or if you require additional accommodations, contact Kristen Northrop at 315.443.7358 or kmnorthr@syr.edu.