Joel Godett ’09 Says Curiosity Is the Key to Good Storytelling

Ball State University play-by-play announcer Joel Godett ’09 thinks that, while it takes initiative and hustle to be successful in the competitive field of sports broadcasting, storytelling skills are even more important. 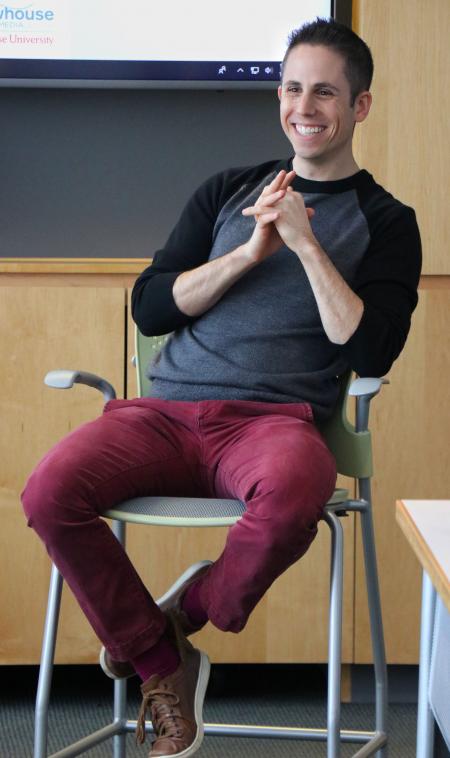 “We are just storytellers and sports are the conduit,” Godett said in his campus talk Jan. 29, moderated by Voice of the Orange and Newhouse adjunct Matt Park.

Godett said that no one comments on the way a game is called. It’s the stories of the athletes that people remember, and it’s his job to get that story.

“Be genuinely curious,” Godett said. “Sometimes I find myself on the 10th page of a Google search [before I find the story].”

Godett once found an article about a player on Ball State’s women’s basketball team, detailing a serious injury she suffered in grade school. Even her teammates didn’t know about it until Godett mentioned it in a broadcast.

Initiative and hustle are what helped him get a job telling stories. Godett graduated from Newhouse a semester early to improve his chances of getting a baseball broadcasting job, and he landed a position calling minor league baseball games in Florida. But the offseason was long, and he was eager to grow in the industry—so eager, in fact, that he sent emails to 35 Division I, II and III schools saying that he would work for free. Fairleigh Dickenson University took him up on the offer.

Godett started out developing video stories at Fairleigh Dickinson and eventually moved into a paid broadcasting position before going to Ball State in 2012, where he is now the assistant director of broadcasting and multimedia.

But resting on his laurels isn’t Godett’s style. Now, as a professional play-by-play announcer, he continues to explore ways to improve his craft through his podcast series, “Play-by-Playcast.”

“What’s cool is that I went to Syracuse, so I knew a lot of people who would [be guests on the show],” Godett said.

Unlike other sports podcasts that focus on game analysis and athletes, “Play-by-Playcast” is about the art of play-by-play broadcasting. What started out as a hobby has now turned into one of the most well-known podcasts in the sports media industry, with over 130 episodes produced in less than three years. But even while hosting his own successful show, Godett is more focused on learning than lecturing.

One of the biggest lessons he’s learned as a play-by-play broadcaster is how to “make the analyst the star.” Analysts are often former players who can give insight into certain plays or relate personal experiences. Sometimes, Godett confessed, he forgets to invite the analyst to share those experiences. Both Godett and Park agreed that it’s essential to ask the analyst for additional context.

“The listener is always asking why,” Park said.

And that curiosity, from both listener and broadcaster, is what makes the work good. While covering the CrossFit Games, Godett said, he told the story of an athlete’s relationship with her mother, who was fatally ill. Two weeks later, the athlete called Godett to thank him; her mother was able to hear Godett’s story before she passed away, and they were both so grateful for that experience.

That, Godett says, is the power of being genuinely curious.

Story by Olivia Conte, a junior dual major in broadcast and digital journalism at the Newhouse School of Public Communications and marketing management at the Whitman School of Management