The University of Arizona (UA) professor, artist and activist believes the oft-repeated phrase masks extreme cruelty and violation. “I seek to unmask such violence, using socially engaged art to intervene and offer shared outrage,” she explains.

Humanities Center Director Vivian May is an ardent supporter of Licona’s work, having invited the scholar to participate in the symposium’s yearlong foray into “Stories.” “Adela shows how the humanities and creative arts give us tools to confront our complicity in violence, while combating inhumane ways of thinking and being in the world,” says May, professor of women’s and gender studies in A&S.

An outspoken critic of Trump’s zero-tolerance immigration policy, Licona makes creative projects that highlight the long and brutal history of state violence against families and children. Such projects, she says, help raise public awareness of, deepen collective engagement in and spur action around issues of social justice.

Licona insists the public humanities—and the liberal arts, in general—play a key role in questioning and combating Trump’s policy, which, to date, has “divided more immigrant children than have been counted from their parents or caregivers.”

“I first heard the term ‘tender-age facility’ last summer, when the current administration began separating and incarcerating children in isolation from those with whom they were traveling,” says Licona, who holds multiple appointments at UA, including associate professor of English and vice chair of the Ph.D. minor in Social, Cultural and Critical Theory. “Children and adults have died at the hands of ICE [the United States’ Immigration and Customs Enforcement agency] and in the context of ‘tender-age facilities’ and ‘transgender migrant pods.’ It’s urgent to ensure people understand there is nothing ‘tender’ about them.”

On Thursday, Feb. 21, Licona will discuss “TENDER R/AGE :: RABIA TIERNA,” an original participatory art project that directs attention to the United States’ flawed immigration system and long histories of forced separations and incarcerations. The event is 5:30 to 7:30 p.m. in Maxwell Auditorium. The following morning, Licona will present a registration-only workshop on a type of coalitional community engagement she calls “borderlands activism.” Both events are free and open to the public.

A&S recently caught up with Licona to discuss how “Stories” can help contextualize histories of cruelty inflicted on migrant and refugee children and their families. 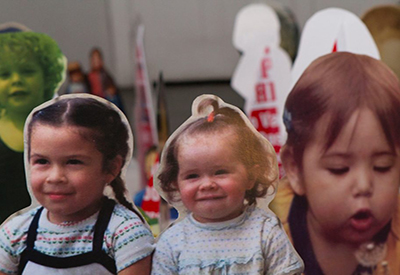 You have said that Audre Lorde, who wrote that our silence does not protect us, was the inspiration for “RABIA TIERNA” [Spanish for “Tender Rage”]. How has your creative project evolved?
It began as a crowdsourcing call to friends to send in photos of themselves as children. Like many project participants, I lived a cage-free childhood, and have always known that caging people was wrong. This project has become a collective outcry against what is happening to children and other migrants at the U.S.-Mexico border.

As someone studying textual and visual rhetoric, I contemplate new ways of seeing, being and relating. Therefore, “TENDER R/AGE” is a collaboration of socially engaged art that intervenes into the horrors of U.S. policy regarding migrants and asylum seekers. At its inception and especially as the project circulates online and as a site-specific exhibition, it becomes relational and coalitional, with distinct localities and other movements for social justice broadly defined.

Family separations are nothing new in the United States.
We have a long, brutal history of them. From slavery and government boarding schools to internment camps, the United States has incarcerated and killed many children through imposed or enforced separations.

We are witnessing the proliferation of a for-profit industry that is unfolding before our eyes, but also stays purposely obscured from us. “Tender-age facilities” are prisons. They are a multi-billion dollar industry in the United States.

This proliferation is taking place in what I call a “regime of distortion,” where the current administration cultivates fear and suspicion through dehumanizing and criminalizing rhetorics. This brings me to the role of the humanities.

That role is—
Formulating tough questions beyond the how, how many and why of any given practice—in this case, issues of migration and asylum.

We can sketch the most pressing issues of our time with data, but the ethical, moral and human rights dimensions [of these issues] must be interrogated and reimagined through a creative and critical humanistic approach. It’s at times like these that I look first to the poets among us. 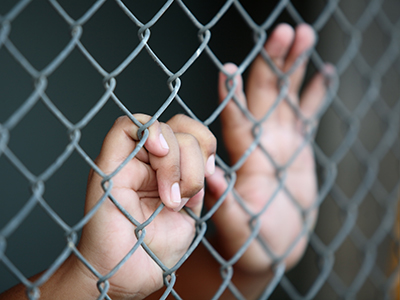 What do you say to people who think illegal border-crossers deserve punishment?
Rather than seeing these separations as a form of punishment, I see them as enactments of simultaneous torture—for the child and the adult. I believe the cries of the children we have heard from the prisons are a call to collective action. They are calling us to do something.

I am fortified by the many writers, thinkers, artists, scholars and music makers who turn their creative and critical attentions toward imagining a world of broad justice, one free from domination. They include [writer] Octavia Butler, who didn’t shy away from the ugliest truths about humanity; [cultural theorist] Gloria Evangelina Anzaldúa, who reminded us that the pen can be used as a sword in the fight for social justice; and [writer] Toni Morrison, who believes writing helps civilizations heal.

I hope my time at Syracuse inspires meaningful conversations and that, together, we might imagine new strategies and practices for collectively being.