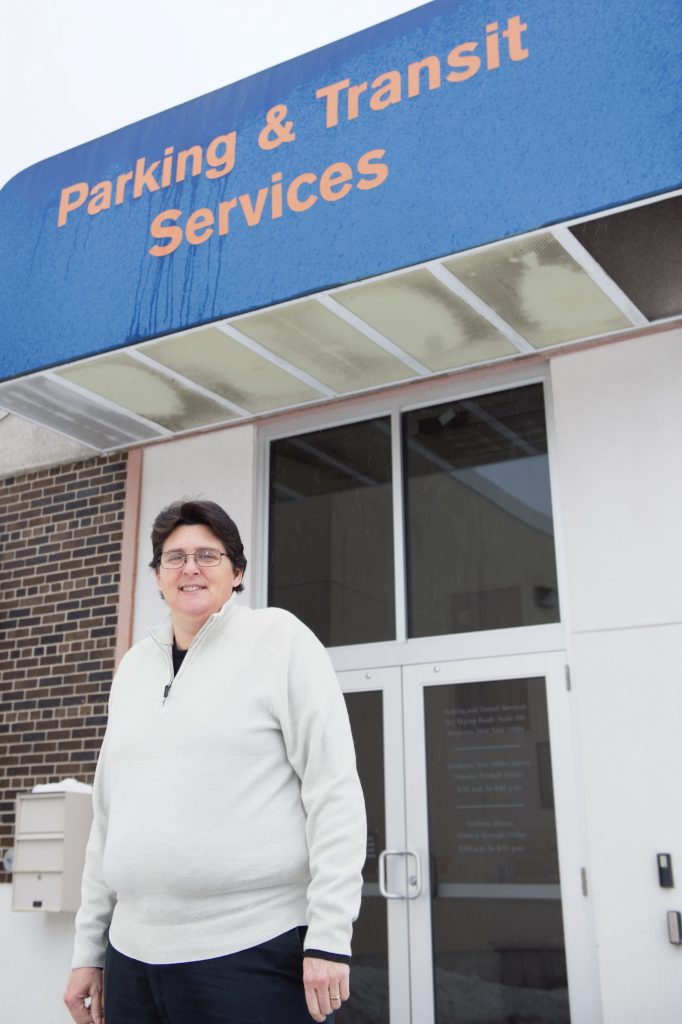 Deanna (Dee) Bailey outside the Parking and Transit Services office at Skytop.

Deanna (Dee) Bailey, associate director of field operations and events for Parking and Transit Services, has trouble remembering which act appeared at the Dome during Thanksgiving weekend in 1990. “I know it was a huge concert,” Bailey recalls. “And it was my first Dome event, and I’m like, ‘Oh my God.’”

Fittingly, Bailey’s first experience with 38,000 people was New Kids on the Block.

“For my first time, it was overwhelming,” she says. “It was just car after car, and I was like, ‘Oh my gosh, this is never going to stop.’”

Bailey first started working for Syracuse University in 1986 in Food Services, cooking in Haven Hall. After leaving the University briefly while working for the Scotsman Press in Syracuse, she returned and worked part time as an overnight parking enforcement officer. “So I wrote tickets at night,” she says. “I think it was, like, three days a week.”

Bailey was eventually hired full time in July 1990. The University had an agreement with Crouse Hospital so nurses parked at Manley lot back then. “And that’s when I got the outer gate job,” she says. “So I used to get here at six in the morning, park all the nurses, and then I’d go to the gate and work my regular shift.”

Since becoming full time, Bailey has worked almost every field position in Parking and Transit Services and practically every large event. She laughs when thinking back about how things have changed over the years, like when Penn State used to be a regular visitor to the Dome. “You should have seen the cars up here at Skytop. And we didn’t even have the room that we have now,” she jokes. “So we were getting very creative.”

The huge crowds are a perk of the job for Bailey. “It’s just fun. I really enjoy the events. I love meeting people. I walk around the lots up here,” she says. “This is normally where I work, up at Skytop for football.”

Joe Carfi, director of Parking and Transit Services, says he considers Bailey to be the public face of parking. “I mean she’s really a pillar, as far as I’m concerned,” he says. “There is a genuineness about her that I think that people pick up on really quickly, and I think that speaks volumes.”

Even with her decades of experience, Bailey approaches her work with enthusiasm. Tony Callisto, senior vice president and chief law enforcement officer, admires her dedication. “With nearly 30 years of service to the Syracuse University community, Dee Bailey has the wide-eyed vision of excellence and excitement toward her work and service, as if it were her first day on the job every day,” he says.

While Bailey has extensive institutional knowledge, Callisto says she is always willing to try something new and innovate. “One of the most impressive, successful efforts was improving the guest experience for events at the Chancellor’s house, when Dee led in the development, execution and on-site management of a plan to offer valet parking,” he says.

Bailey’s day-to-day activities center mainly on helping people, either her staff or customers. She coordinates and leads daily field operations for parking and manages all event parking on campus. Additionally, she works with local bus companies and coordinates bus orders for Dome events.

“Dee’s expertise in planning for, and direct management of, major events, with tens of thousands of people coming to campus, is often unnoticed because of the lack of problems experienced by those arriving and parking,” Callisto says.

Bailey also manages parking requests for events happening in parallel to Dome events by writing up instructions for booth attendants. “I review all the events that are happening on campus during the game, where they’re supposed to park, where to direct them,” she explains. “And then anybody that has a special request–maybe there’s a professor that reached out and needs parking for Thursday night because he’s teaching.”

“I don’t like to just say no,” Bailey says. “You don’t realize how many departments are also having events. So that’s the biggest challenge—just trying to take care of everybody so that everybody’s happy.”

Bailey is passionate about her work. “Actually, I used to feel guilty for taking games off,” she says. “Really, my life was around Dome events.” She credits Carfi with helping her attain more work-life balance. “He’s made me look at things a little differently about taking time off, and we’ll be okay without you.”

Carfi says Bailey’s greatest strength is how she works with people. When difficult situations arise—like not having enough room for a group to park—the trust, understanding and mutual respect she has fostered with departments on campus help things run smoothly. “She brings so much,” says Carfi. “Among the most obvious is the experience, the relationships.”

Bailey’s favorite part of her job is working with the campus community. “I’ve established a lot of relationships with other departments, and I know there’s more out there to establish,” she says. “Because not everybody communicates their events, and it’s one of my goals to get people to call us. We’ll help you. We’re not going to say no.”

Bailey works in all weather, from driving rain to bitter cold. Carfi recalled a specific example of her tenacity: “It was probably a game, it was one of the football games where it was just…it just rained all day and all night, and Dee was out there with those people getting drenched,” he says.

Bailey has a unique perspective about dealing with bad weather. “You can be miserable or you can say, ‘Hey, let’s see who I’m going to meet today,’” she says.

Callisto believes Bailey’s affability is a key attribute to her success. “Dee loves what she does, loves the people she works with and supervises, loves the students, faculty, staff and visitors, and loves Syracuse University,” he says. “She truly bleeds Orange, and her excellent work is the outcome!”