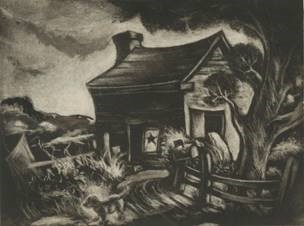 The Syracuse University Art Galleries presents “Dox Thrash, Black Life, and the Carborundum Mezzotint,” currently on view through March 8.  The exhibition brings together over 50 works on loan from public and private collections that reveal the experimental printmaking process, known as the Carborundum mezzotint, pioneered by Thrash.

A Lunchtime Lecture will be held Wednesday, Feb. 6, at 12:15 p.m. Join Andrew Saluti, printmaker and assistant professor of museum studies, for a gallery tour of the exhibition.

A Philadelphia-based artist, Thrash was a noted participant in the New Negro movement of the 1930s and ’40s.  Also on view are works by Thrash in other print mediums, including  watercolors and drawings, all of which powerfully document the artist’s intimate, invested engagement with African American culture in the middle decades of the twentieth century.  Organized by Dolan/Maxwell, this exhibition was previously presented at the Palmer Musuem of Art , and will travel to Fort Wayne Musuem of Art this spring.

The exhibition will be on view through March 8, 2019 in the Shaffer Art Building at Syracuse University. Gallery hours are Tuesday-Sunday, 11 a.m.-4:30 p.m.; and Thursdays 11 a.m.–8 p.m. The gallery is closed on Mondays and University holidays.  Patrons are welcome to view the exhibition until the gallery closes at 8 p.m.

Philadelphia-based artist Dox Thrash (1893–1965) was both a pioneering printmaker and a noted participant in the “New Negro” movement of the 1930s and ’40s. A veteran of World War I as well as the minstrel stage, he trained at the School of the Art Institute of Chicago before making his way to Philadelphia, where he ultimately forged a career as both a painter and a graphic artist.

In 1937, Thrash signed on for employment with the Federal Art Project’s Fine Print Workshop. There, while working with fellow artists Hugh Mesibov and Michael Gallagher, he began to experiment with a new approach to intaglio printmaking, which today is known as the carborundum mezzotint process. By thoroughly abrading a plate with particles of carborundum, or silicon carbide, the artists could create a design on its surface by burnishing and scraping. When inked and printed, the plate yielded an image that was remarkably rich in darks and lights. With its broad tonal range, the new process was ideally suited to the sensitive portrayals of Black life for which Thrash would become known.