Light Work presents “Rodrigo Valenzuela: American Type,” a solo exhibition on view in the Kathleen O. Ellis Gallery through March 1. The opening reception on Thursday, Jan. 31, from 5-7 p.m., features a gallery talk with Rodrigo Valenzuela at 6 p.m. Signed copies of  “American Type” exhibition catalog, Contact Sheet 200 will be available to collectors after the talk. 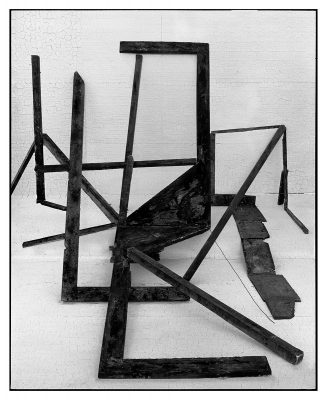 Light Work is located in the Robert B. Menschel Media Center, 316 Waverly Avenue. The exhibition and reception are free and open to the public. Refreshments will be served.

Rodrigo Valenzuela’s  work boldly addresses themes of labor, power and representation. For a Chilean artist living in America at a moment in which the president of the United States continues pressing for a border wall, the underlying narrative of Valenzuela’s work—of immigration and the struggles of the working class—is as charged as ever.

The title of the exhibition, “American Type,” refers to a 1955 essay in which art critic Clement Greenberg frames the work of abstract expressionist painters such as Pollock, Kline, Motherwell, and Rothko as distinctly American. Greenberg proposed that post-war American painting was more about the act of painting itself than about any complex idea of representation. Valenzuela finds it interesting to challenge this concept and, as he puts it, to contemplate “how much the absence of content has become the American gold.” He doesn’t argue that abstraction is necessarily without subject or emotion, but Valenzuela questions Greenberg and art world elitism more generally by making his own subversive abstractions that he imbues with social-political meaning.

Valenzuela’s approach to representation in his work draws our attention to the extensive labor of his artistic process. Every aspect of his work shows a trace of his own labor, from the building of studio assemblages, to the photographic steps that lead to the final prints. Even the wooden frames that hold the work have been cut, assembled, and painted by his hand. Labor is inherent in the making of all art, but for Valenzuela it becomes a compelling central subject.