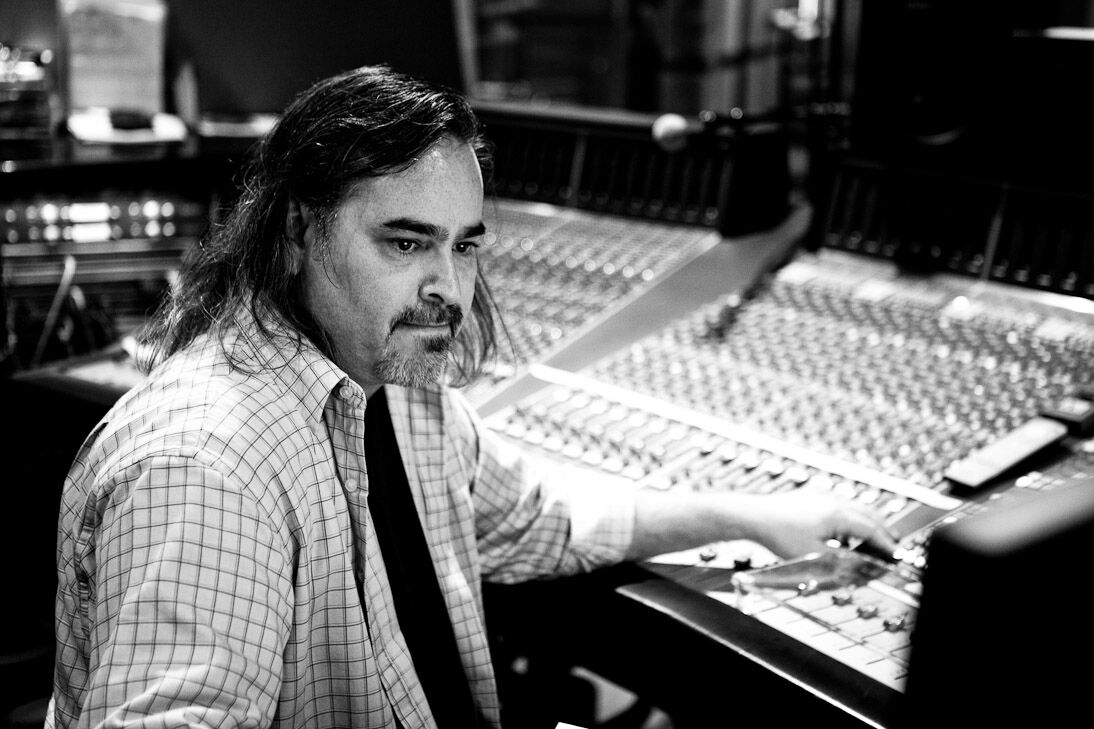 Keith Kobland: Hello and welcome to Staff Spotlight. This is a series in which we highlight staff members here at Syracuse University. My name is Keith Kobland from the Marketing and Communication Division, and right now we are in Newhouse 2, Suite 490, and we’re speaking with Patrick McDougall, who’s an audio engineer here. And Patrick, thanks for joining us first and foremost.

Patrick MacDougall: My pleasure. Thank you for having me.

Patrick MacDougall: The audio engineer is responsible for making sure that not only does the equipment work properly but is responsible for capturing whatever sound it is you are working on, whether it’s in a radio station environment or in a music studio or a live performance. The engineer is the person either operating the console or working behind the scenes to make sure that whatever project that you’re involved with is being successfully broadcast or captured.

My role here is to make sure that this studio, Studio 3, as well as Studio 1 down the hall, are functioning, so that we can continue to teach the classes that use the space. So my job here is a little bit more technical, until the students come in. Then I teach two different classes, an introductory course as well as the Advanced Audio Capstone.

Patrick MacDougall: I was a trumpet player through college and decided that I would rather not rely on being a trumpet player for every day of my life. I moved to Southern California to continue my education at the Dick Grove School of Music and focused on the recording and engineering program there. It was a bold move: actually go move across country and do something I’ve never done before. It was one of the best decisions I’ve ever made.

I love working in the studio. I really got to start at the Grove School of Music. From there, I got a job in a recording studio, a glamorous job of construction actually. We were building a brand new studio. And from there, I met so many wonderful people and my mentor, my dear friend Brian Malouf. I worked with him and on several sessions and he said, “I have to have you with me at all times.” So his productions and mixing took us all over Southern California, and we had a great, great run together. Fast forward, the co-founder of Microsoft, Paul Allen, was building private recording studios. So I went to work for Paul Allen and for 12 years. And that’s where I got to travel around the world with him and his band and doing all kinds of projects. Wonderful stuff. Great people, great, great group to work with.

Keith Kobland: As I’m looking at some of the artists that you’ve worked with before—I mean, it is an impressive list here.

Keith Kobland: You want to name some of the folks that you’ve worked with? Name drop here.

Patrick MacDougall: I will, absolutely. The band Heart, I’ve done three records with. Robbie Robertson from The Band. I’ve learned so much from him. I’ve done several projects with Robbie. Some of my favorites—you know, some of my highlights—would definitely be working with Mick Jagger and Joss Stone, with, Dave Stewart from the Eurythmics. I was the producer of a project called “Superheavy,” and that was aptly named. It was a song they all wrote together, but that was Mick Jagger and Joss Stone, Dave Stewart; like I said, for the Eurythmics. A.R. Rahman, composer, known mainly for “Slumdog Millionaire” and Damian Marley. So this group was outrageous, right, and an experience where, you know, come into the studio and Mick Jagger walks in and you know what’s your first response: it’s like, “Wow, that’s Mick Jagger,” you know. I’d been in the business for 20 years and still I was like, “Wow, that’s, that’s Mick Jagger.”

Keith Kobland: What’s it like being at the controls knowing who is on the other end of that microphone in that moment?

Keith Kobland: I want to ask you, we’ve talked about what you do and being an audio engineer, and we’re sitting here at the console. I’m not sure if there’s any way you can bring our listener into the world that you live in, if there’s any example of what you do or anything that we could, you know, highlight and let people know that “hey, if you’re listening to this, this is a little bit of what Patrick does and this is a little bit of what he teaches his students.”

Patrick MacDougall: Well, what I have here is a song that was done by a young local artist, and his name is Tanksley [he is the son of Jake Tanksley, senior human resources business partner in Syracuse University’s Office of Human Resources]. He performs out around town. And he’s incredibly talented. So this is the first song we did together. It’s called “Hyperfocus.”

About seven years ago, eight years ago now, her mother was diagnosed with stage 4 ovarian cancer, and it became obvious to us in 2012 that she was going to need more support from Sabrina, my wife, so we discussed it. We have two daughters. We had to get buy-in from each of them as well about what’s going to happen if Mom’s gone all this time, and I’m working in the studios crazy hours, how’s that going to work?

Well, we decided to move back here to help, and it’s probably the single greatest decision that I’ve made. And thatwe’ve made as a family.

When I got here, I met somebody that I went to college with, Ron Keck, the owner of SubCat Studios. And I started working doing some freelance stuff there, where I met staff members from the University, like Jim Abbott from the School of Music. And Jim asked if I would be interested in helping out, and I was like, “Sure, why not?” So I started recording the concerts and recitals at the School of Music and teaching one of their music courses. Well, that led to my introduction to the staff here at Newhouse, Doug Quinn in particular. And Doug brought me in, asked if I’d be interested in teaching that program, helping out with the music production programs here.

So that’s how I got introduced to Syracuse University, and it’s been very rewarding for me and my family. Our oldest daughter just graduated from ESF, and our youngest daughter’s a freshman in the School of Music here. So we’ve got a lot of Orange going on in our family right now.

Keith Kobland: We have talked about a wide variety of things here, but just to wrap this up I’ve got to ask, “What sparks your imagination, Patrick?”

Patrick MacDougall: It’s working with the artists. I love being around creative people. I love the mutual respect. So for me the inspiration comes from…I love technology, don’t get me wrong. I love all of our analog and digital bits and things and microphones, love microphones, okay. That makes me an audio geek, which is cool. It’s okay with that. I’m okay with that. That gets me going, as does knowing that the artist is looking for that next level to take the production.

Keith Kobland: You know, I should also ask you, just finally, any advice for anyone who has an interest in doing what you’re doing and doing what your students come in here to learn?

Patrick MacDougall: The advice that I give most often is, “Go for it.” If you are interested in getting into engineering and you love music, it’s important to make sure that you don’t lose track of the fact that you have to do both. Understand that there’s going to be technology. Understand that that technology is meant to help you get the music to its end goal. So, yeah, I learn from the students. I love the energy of being around the young minds that want to learn more and I encourage them: look, “keep going for it, keep focused on it, and you can succeed”; but it’s going to take some work, and it’s very rewarding, very rewarding.

Keith Kobland: I can tell. Patrick MacDougall, thank you very much for your time. This has been fascinating. We appreciate it.

Patrick MacDougall: I’m grateful for the opportunity, and thank you very much.

Keith Kobland: If you have a staff member that you would like us to spotlight, please reach out to Kevin Morrow at kdmorrow@syr.edu.