Syracuse University today announced the appointment of Neal Powless G’08 to the post of University ombuds. In this role, Powless will serve the campus community as a neutral, independent, informal and confidential resource for faculty, staff and graduate students who are seeking assistance to answer questions and resolve concerns. Powless’ appointment is effective on Tuesday, Jan. 22. 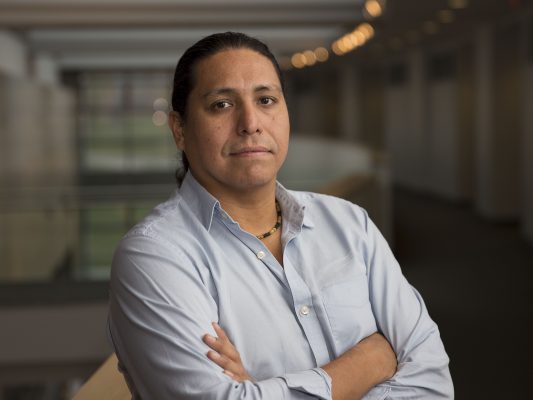 “Neal Powless has the demonstrated vision, wisdom, sensitivity, leadership, skills and competence to make a powerful contribution to a respectful, responsive and ethical campus community,” says Chancellor Kent Syverud. “His experience in career and academic advising, in social and personal counseling, and in the Office of Multicultural Affairs have prepared him to serve in this key role.”

Powless is no stranger to the Syracuse University community. From 2011-15, he served as assistant director of the Native Student Program in the Office of Multicultural Affairs. Prior to that, Powless was a career counselor with the Center for Career Services.

He is currently a Ph.D. candidate in the Newhouse School, where his research is centered on Indigenous imagery in contemporary film. He earned a bachelor’s degree in psychology at Nazareth College and a master’s degree in counseling at SU. Powless is also a Nationally Certified Counselor (NCC).

“I look forward to serving the Chancellor and Syracuse University by creating a safe space to discuss any issue in confidence,” Powless says. “My plan is to build upon the great work already established by the Office of the University Ombuds. I encourage the campus community to get to know the staff and utilize our resources to develop effective communication throughout the University. It’s my goal to cultivate an open, supportive and empowered community.”

Powless is a member of the Onondaga Nation Eel Clan. He and his wife, Michelle Schenandoah, founded Indigenous Concepts Consulting to serve Indigenous communities and to incorporate Indigenous perspective into mainstream business and media paradigms. He is the son of the late Beaver Clan Chief Irving Powless Jr., who was a good friend to the University. Powless, a three-time All-American and professional lacrosse player, also serves as head coach of the Netherlands National Box Lacrosse team.

LaVonda Reed, associate provost for faculty affairs, professor of law and chair of the search committee, says Powless will help the newly formed office grow its role on campus. “Neal has the experience, the judgment and the vision to make the Office of the Ombuds a valuable and vital resource for staff, faculty and graduate students,” Reed says. “The office itself has already handled many concerns that individuals did not wish to address through other official channels. Its service will no doubt grow in the years ahead.”

Other members of the search committee were:

The Office of the University Ombuds is located at 111 Waverly Ave., Suite 215. The office can be reached via email at ombuds@syr.edu or by phone at 315.443.1087. For more information, visit www.syracuse.edu/about/ombuds/.

Syracuse University is a private, international research university with distinctive academics, diversely unique offerings and an undeniable spirit. Located in the geographic heart of New York state, with a global footprint and nearly 150 years of history, Syracuse University offers a quintessential college experience, as well as innovative online learning environments. The scope of Syracuse University is a testament to its strengths. At Syracuse University, we offer a choice of more than 200 majors and 100 minors offered through 13 schools and colleges and 18 online degree programs. We have more than 15,000 undergraduates and 7,500 graduate students, more than a quarter of a million alumni in 160 countries and a student population from all 50 U.S. states and 123 countries. For more information, visit syracuse.edu.