When Stefanie Grafstein heard about VerticalU, a new vertical video workshop launched last year by media partners BuzzFeed and Instagram, she jumped at the chance to apply. 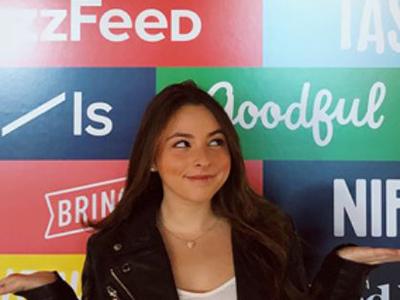 “I realized that shooting television vertically could be the next big step in the industry and I wanted to have the opportunity to make my mark in this new platform,” Grafstein says.

Last summer, Instagram announced Instagram TV (IGTV), an app made to deliver long-form, vertical video content designed to be viewed on phones. Through the VerticalU program, content creators travel to Los Angeles to train with industry professionals and work with a BuzzFeed mentor to develop a vertical video series. The program funds the shooting of the projects, which premiere in New York and on IGTV in March. Grafstein learned of the opportunity when Maycie Timpone, director of social media for BuzzFeed, visited Professor Jennifer Grygiel’s BuzzFeed: Future Media Skills class, which Grafstein took last semester.

“In a way, it almost [felt like] more of an internship [than a course],” Grafstein says. “We had the opportunity to speak with staff from all different parts of the company and write as contributors for BuzzFeed Community.”

After having such a fantastic experience in the class, Grafstein didn’t hesitate to develop an idea for her application to VerticalU. Grafstein’s winning proposal, ReCollections, is a series about extreme collectors, all shot in vertical format and intended to be viewed on a phone. Grafstein went to Los Angeles for the kickoff course, an intensive five-day workshop taught by experts at BuzzFeed and Instagram, and filmed the episodes while at home in New York.

“Being at BuzzFeed for the week was amazing because we truly were treated like employees and not just visitors,” Grafstein says. “We attended training sessions on how to create vertical video and worked with Instagram to develop our social media skills and online presence.”

Grafstein, who is studying abroad London this semester, will work remotely with her mentor, a BuzzFeed producer in Los Angeles, to finish the series before the premiere in March.

“I truly believe that this opportunity would have not been possible without the unique courses and amazing professors that Newhouse offers,” Grafstein says. “Being thrown into a professional environment can be intimidating for some, but I feel that Newhouse has prepared me to conquer anything.”