As part of the University’s enduring commitment to veterans and the military community, the Office of Veteran and Military Affairs (OVMA) and the Institute for Veterans and Military Families (IVMF) partnered with athletic donors Ted Lachowicz ’72 and Cliff Ensley ’69, ’70, G’71 to provide more than 400 veterans and military families with free tickets to the Camping World Bowl in Orlando, Florida, on Dec. 28. 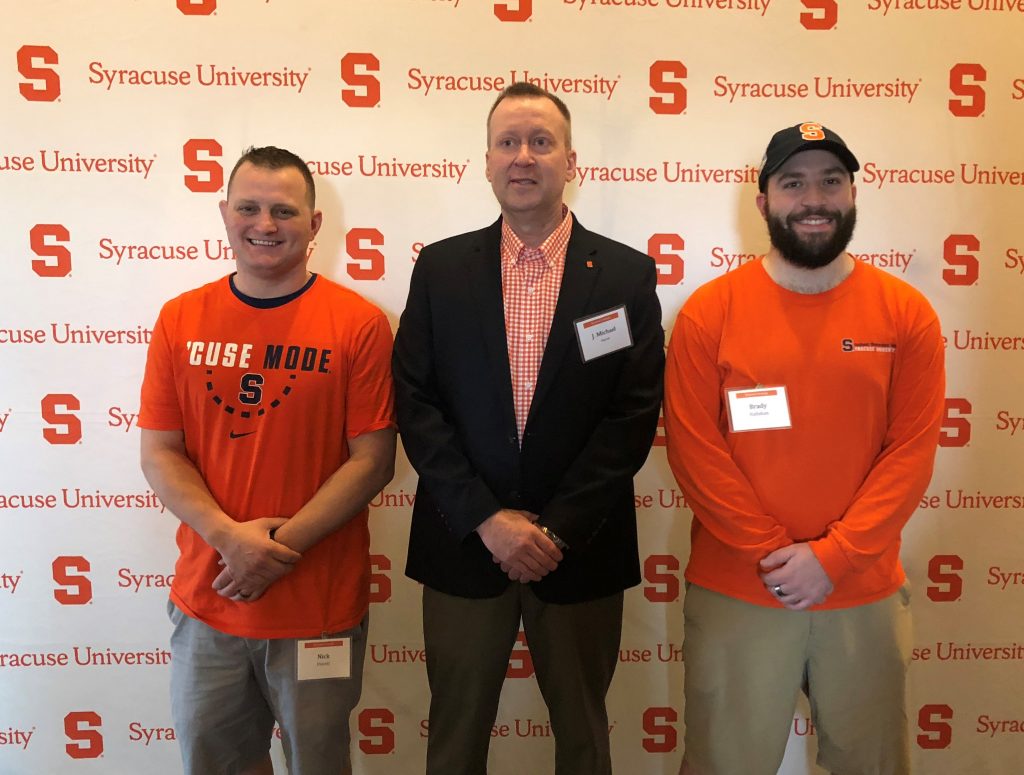 “Ted and Cliff continue to be great supporters of the partnership between Syracuse Athletics and Syracuse’s veteran and military programs,” says Mike Haynie, vice chancellor and IVMF executive director. “Their financial support allowed us to include many veterans and military-connected individuals in this historic and exciting event. Their generosity and inclusion is exemplary of the way the Syracuse community goes above and beyond for those that serve our country.”

“We have much to be thankful for, including the generosity Ted and Cliff once again displayed with their support, and the commitment of those who are serving or have served our country,” says John Wildhack, director of athletics. “The Camping World Bowl was an amazing experience for our student-athletes, alums and fans. Having more than 400 veterans and military families in attendance made it even more impactful and special.”

In addition to the donated tickets, Syracuse Athletics, the OVMA and IVMF also hosted a special “Cuse for Troops” contest encouraging veterans to share their Orange pride on Twitter for a chance to win free tickets and travel to the Camping World Bowl. Brady Hallahan, a Syracuse University student and U.S. Navy veteran, and Nick Prietti, a Syracuse-area veteran were selected as the contest winners.

A Syracuse native and Central Square High School graduate, Hallahan joined the Navy after high school, served five years and was deployed twice to the Middle East. After getting out, he completed a transition program in Connecticut during which he heard about the programs offered through Syracuse’s Institute for Veterans and Military Families. After doing more research, he decided to pursue his degree at the University.

“As I was making my decision I saw how much Syracuse does for veterans and how focused they are on helping us,” says Hallahan. “The application process was amazingly easy and being designed to assist veterans made me feel really wanted here. I still can’t believe I am lucky enough to go to SU.”

Prietti grew up in Syracuse and enlisted in the U.S. Army after graduating from Corcoran High School. The first in his family to serve, Prietti deployed to Iraq twice for yearlong deployments. After four years of active-duty service, he transitioned to the New York National Guard and pursued a civilian career in Syracuse. He completed an associate’s degree from Onondaga Community College and received a bachelor’s degree at SUNY Delhi. He now works as a carrier for the U.S. Postal Service.

The ticket contest and giveaway align with and support Chancellor Kent Syverud’s commitment to make Syracuse University the “best place for veterans.” Such objective is supported by a series of strategic initiatives, including the creation of the OVMA and IVMF. The University is furthering that commitment with construction of the National Veterans Resource Center (NVRC), a first-of-its-kind multi-use facility dedicated to advancing academic research, programming and community-connected innovation serving the social, economic and wellness concerns of the nation’s veterans and families.