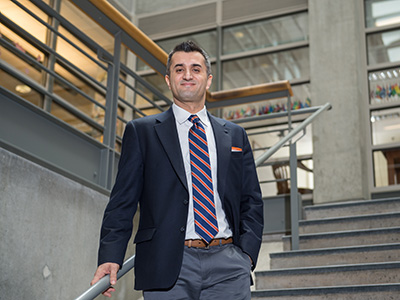 A Syracuse University professor has received a National Endowment for the Humanities (NEH) fellowship, supporting research into the complex interplay between democracy and Muslim Family Laws (MFLs) in non-Muslim-majority countries.

Yüksel Sezgin, associate professor of political science in the Maxwell School of Citizenship and Public Affairs and the College of Arts and Sciences, will use the $60,000 fellowship to work on a book-length comparative study of the democratization of Islamic laws in Greece, Ghana, India and Israel.

Under contract with Cambridge University Press, the book will be the first of its kind, empirically answering the question: “Can MFLs and democracy co-exist within a non-Muslim-majority country?”

For more than a thousand years, MFLs have regulated familial relations among Muslims, influencing marriage, divorce, custody and inheritance.

There are currently 53 countries—35 Muslim and 18 non-Muslim-majority ones—that formally integrate MFLs into their national legal systems.

Sezgin is focusing on Greece, Ghana, India and Israel because they are the world’s only non-Muslim-majority countries that are considered functioning democracies and formally integrate MFLs into their legal systems. These four “test cases,” he says, may hold clues to how Islamic law could flourish within other democratic frameworks.

“Most scholars suggest that various aspects of state-enforced MFLs, such as underage marriages, polygyny and unilateral male divorce, are irreconcilable with democracy and the rule of law because they violate basic human and women’s rights,” says Sezgin, a scholar of comparative religious law, who also directs the Middle Eastern Studies Program in A&S and the Maxwell School. “I believe it is possible to reform MFLs and render them compliant with these rights, provided certain institutional and political prerequisites are met.”

Drawing on field research he conducted in all four countries from 2012-16, Sezgin has accumulated a treasure trove of ethnographic and archival data supporting his argument.

He says that while the four countries identify certain aspects of MFLs as “problematic,” their non-Muslim governments lack the moral authority to amend such religious laws: “As a result, they delegate the task of reforming Islamic laws to their civil judiciaries. These civil courts, however, don’t always bring about direct changes to MFLs.”

As with most of his work, this book likely will attract readers from the United States and the broader Muslim world—areas with deep-seated convictions about the other.

“In systems where Muslims are allowed to choose between civil and religious laws, there is considerable evidence of respect for and compliance with human and women’s rights. Likewise, jurisdictions whose courts enjoy legitimacy among Muslim citizens, court-initiated reform in Muslim law is more successful,” Sezgin says. “Perhaps this book will provide a roadmap to understanding.”