Eileen Schell, a professor in the College of Arts and Sciences’ Department of Writing Studies, Rhetoric, and Composition, and Kelly Chandler-Olcott, a professor in the School of Education’s Department of Reading and Language Arts, both conclude their three-year active terms as Meredith Professors. As part of the appointment, each pursued a project relating to some aspect of teaching or learning that held special interest for them.

Schell’s project, titled “The Long Trail of Memory: Engaging War Narratives on Campus and in the Community,” was designed to engage University and community members, veterans and related organizations in dialogue and public readings focused on memory and trauma 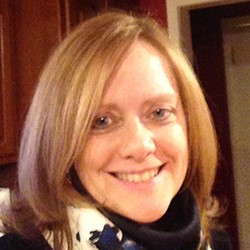 Schell also developed an honors course, titled “Reading and Writing War,” and a series of public forums featuring panel discussions and readings of original works by veterans and other survivors of war.

Schell serves as director of the composition and cultural rhetoric doctoral program, a professor of writing and rhetoric, and a faculty affiliate in the Department of Women’s and Gender Studies. Chair of the Syracuse University Writing Program from 2007 to 2012, she has written six books and co-edited collections addressing the themes of labor studies, feminist theory, rural studies and community writing groups. Along with colleague Steve Parks, she co-edits the series Writing, Culture, and Community Practices for Syracuse University Press. Schell founded two community writing groups—one at the Nottingham Senior Living Community and another for military veterans and military families.

Chandler-Olcott’s project, “Designing for Ambitious Education in an Equitable Society,” focused on developing a signature education course as a required introduction to the field for all undergraduate students entering the School of Education’s teacher education programs as well as an elective for other interested students. The course, co-taught by a faculty team representing multiple academic disciplines, addressed some of the compelling, often controversial issues that are debated in the field both in the U.S. and beyond.

A professor of reading and language arts, Chandler-Olcott recently transitioned from her role as associate dean for research in the School of Education. Prior to that role, she served as the department chair of reading and language arts. Chandler-Olcott is a former high school English and social studies teacher who now teaches English methods and content literacy courses to secondary and K-12 education majors.

With support from the National Science Foundation, the International Reading Association, and the Spencer Foundation, she has published five books, with a sixth out this spring, and more than 75 chapters and articles. She also currently serves as a co-editor of Journal of Adolescent and Adult Literacy.

The Laura J. and L. Douglas Meredith Professorships award program was established in 1995 to recognize and reward outstanding teaching at the University. Meredith Professors are enrolled for life in the Meredith Symposium, which provides them with a permanent forum for the discussion of teaching and learning. During the three-year term of their active award, Meredith Professors engage in teaching scholarship defined by a project of their own design.

For more information on the Meredith Professorships, including nomination information, go to the program website.