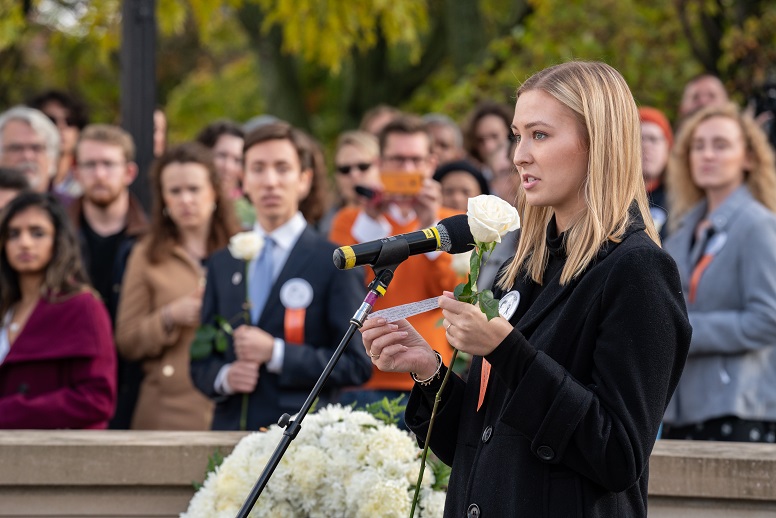 Even though he passed away nearly a decade before she was born, Steven Russell Berrell has always been a strong presence in the life of his niece, Katie, a Syracuse University senior.

His smile radiates from the family pictures in her home, and from the pin that her grandmother, Sally Berrell, wears on her shoulder every day. He is always present in family stories.

Steve was killed in the bombing of Pan Am 103 over Lockerbie, Scotland, on Dec. 21, 1988. He was among the 270 victims of the disaster and one of 35 students returning from a semester of study abroad through the Division of International Programs Abroad (now Syracuse Abroad).

This year, Katie has had the opportunity to create a new special bond with her Uncle Steve. A native of Orono, Minnesota, Katie is an inclusive elementary and special education major in the School of Education, a member of the Renée Crown University Honors Program and a 2018-19 Remembrance Scholar. She is representing Steve during her scholar year, and she is the first direct relative to represent one of the 35 Syracuse University student victims in the Remembrance Scholar Program’s 29-year history.

Steve, from Fargo, North Dakota, was a dual major in communications in the S.I. Newhouse School of Public Communications and marketing in the Whitman School of Management and a brother in the Phi Delta Theta fraternity. He was just 20 years old and returning home from spending the fall 1988 semester in London when he died.

Katie’s father, Rob Berrell, describes his younger brother as a natural leader—an outgoing person with a big and diverse group of friends. He had a natural affinity for tennis and the trumpet.

In “On Eagles Wings,” a memorial book published after the bombing, Steve is described as a loyal friend—a sensitive, considerate and caring person who reached out in a special way to many people.

“He loved to explore new places and ideas with imagination and an open mind,” his memorial statement says. “Steve had a deep respect and love for his family. He set high goals for himself and worked hard to attain them. His sense of humor and warm smile were always present.”

Katie grew up in a family in which her Uncle Steve was always there. “I don’t remember a specific moment in time when we became aware he was not physically with us,” Katie says. “I never felt like he was someone that I didn’t know.”

Steve had followed his older brother, Rob, to Syracuse. Katie’s parents, Rob and Karen, met at the University and both graduated in 1987. Her brother, Andy, is a prospective Syracuse student.

Katie grew up in a home infused with Syracuse spirit. She remembers her Syracuse cheerleader Barbie doll and how her parents would find a way to tune into Syracuse basketball games during their spring break family vacations. 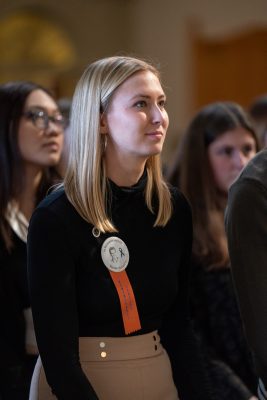 Her parents encouraged her to explore her options when it came to selecting a college, but emphasized the importance of attending a school you can be proud of. Syracuse was her choice. She was impressed with the School of Education and its offerings and the campus—a big school with a smaller campus feel, she says. “I loved everything about Syracuse when I came here,” Katie says.

In high school, Katie volunteered with after school activities for students with disabilities and on her school’s Special Olympics team. “Those were some of my fondest memories from high school—working with and learning from students who were differently abled and who came from different backgrounds of my own,” she says.

In the School of Education, she has had an incredible experience learning about the inclusive model of teaching. “I had not been formally introduced to inclusive classrooms until college and I have been fascinated by how impactful and meaningful a student’s experience can be in the classroom when their teacher is equipped with the resources and the knowledge of how to teach to their specific needs,” she says.

As a first-year student, Katie had intimate knowledge of the Pan Am 103 tragedy and the ways that Syracuse remembers those who were lost. Leo Wong ’14 was the Remembrance Scholar who represented Steve during the 2013-14 academic year. He developed a close connection with the Berrell family and had a strong influence on Katie.

“I met Leo Wong even before I was on campus,” Katie says. “He comes back to campus every year to remember, and put together this incredible scrapbook for my family this year with photos and reflections from scholars who represented my Uncle Steve in years past.”

“Leo has become a real part of our family, and I think that is a real hallmark of the Remembrance Scholars Program—the connection between the Scholars and the families,” she says.

Spending the Rose-Laying Ceremony with Katie each year that she has been a student at Syracuse, leading up to this year’s milestone moment to when she laid a rose on behalf of her Uncle Steve, has been a true privilege,” Wong says.

Katie says this year’s Remembrance Week, held Oct. 28-Nov. 3, was overwhelming—in a good way. “I don’t even know how to describe my experience. I have seen it the past three years as it’s something I have been connected to and have helped out in different ways. This year I got a totally different, full circle understanding of the experience,” she says.

“I have such a deeper respect for the students that represent the victims; “I have never met more incredible people in my life,” Katie says of her fellow Remembrance Scholars. “Being a family member, I have always grown up knowing how important this was. Then, to see 34 other people with not as much of a personal connection but still wanting to be a part of carrying this legacy forward is very heartwarming. The Scholars really bond with the people they are representing.”

One of the highlights for Katie during Remembrance Week was the opportunity to meet several Syracuse alumni who were in London in the fall of 1988 with Steve. “That was a great moment for me,” she says. “I got to meet people who were his friends and could describe him and his experiences in other ways than what I have heard from my family.”

Rob Berrell represented the victims’ families at the Remembrance Scholar convocation in Hendricks Chapel on Nov. 2 and presented pins to each of the 35 Remembrance Scholars. It was a mix of emotions for him. In that role, he was remembering his brother, carrying the duty of representing the Pan Am 103 families, and watching as a proud parent as Katie was honored for her achievements as a student and a Remembrance Scholar. “We are very proud of her and were excited for her to have this experience,” she says.

Recently, Katie’s parents were cleaning out their basement and came across a box of postcards that Steve had sent from his travels abroad, including to Amsterdam. “I had all of those same experiences when I studied abroad in Madrid,” Katie says, yet another connection to Steve.

Katie plans to act forward, in the spirit of the Remembrance Scholars, in her role as a future inclusive elementary and special education teacher. Her desire to be a teacher was inspired by her grandmother, who was teacher in New Jersey for more than 35 years and won the state’s first Teacher of the Year award. “After three years of learning and practicing in the Syracuse City School District, that means so much more to me now,” she says. “I have seen firsthand the immense struggles that both my students and fellow teachers have had to go through just to provide meaningful learning opportunities for their students. Inclusivity is something that I will constantly strive to achieve in all aspects of my life after college.”

She one day hopes to create a summer program that follows the inclusive model of teaching so that students from all walks of life can come to learn and make connections to their community. “Most importantly I want to be a teacher who helps students understand each other and respect the uniqueness in their peers,” she says. “Sometimes students learn the most from each other rather than only from their teacher.”

One thing that will stay with her forever is her experience as a Remembrance Scholar—an experience that is hard to put into words, she says.

“I have felt an even closer connection to my family since I have had the opportunity to sit down and talk about my uncle and the many incredible things that his legacy still leaves behind today,” she says.  “This scholarship has blessed me with a community of people who care so deeply about this tragedy and the families who were affected.

Katie says she was challenged and supported all at once with the responsibilities of being a scholar. “I was challenged to better our University’s remembrance of the 35 Syracuse victims of Pan Am 103, as well as to sustain a legacy for all of the 270 people that were lost that day.”

“This scholarship has given me so much love and joy amidst all of the sorrow and sadness that comes with each passing year,” she says. “I have always looked up to the Remembrance Scholars each year, in awe of their individual accomplishments and their collective integrity. I feel so honored to be a part of that legacy as both a scholar and as Steven’s niece.”