All Hands on Deck: VPA Senior’s Involvement on Campus Springs Him Into ‘Elf the Musical,’ New York City and Beyond 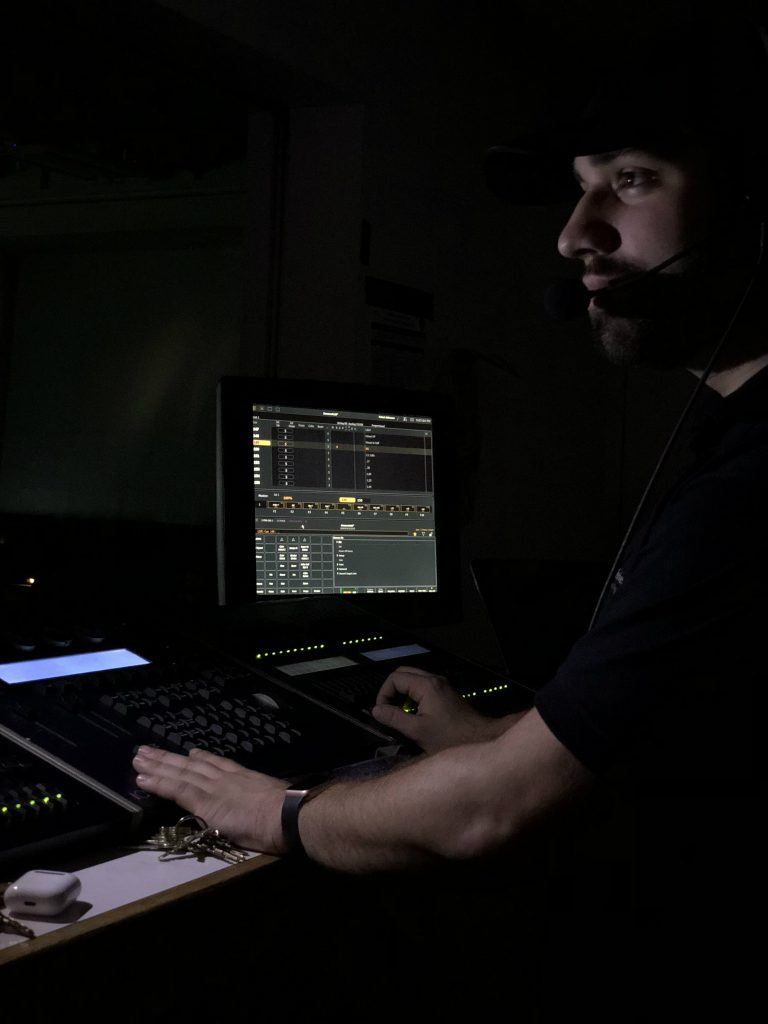 Sam Arencibia working at an SCPS light board.

Behind the scenes of every production is a team making it all happen. An organized chaos of choreographed disarray moves to give the audience the experience and “wow” moments for which they attend the theater. Samuel Arencibia, a senior in the B.F.A. program in stage management in the College of Visual and Performing Arts (VPA), graduates this December to begin orchestrating the chaos full-time as a stage manager. Not until, however, he wraps up “Elf the Musical,” a show currently being co-produced by Syracuse Stage and the Department of Drama through Jan. 6.

Technical “tech” week is an exciting and stressful week in theater productions. It’s the first time all of the technical elements—including costumes, lights, sound, set and makeup—are brought together to rehearse on stage. Tech week is an opportunity to witness everything coming together and fine-tune the power of the performances. When production entered tech week for “Elf the Musical,” there was a, well, technical problem: the production team was unexpectedly down a deck crew member.

Arencibia had been shadowing the production process as part of his six-credit internship with Syracuse Stage’s production management department. Two hours into the first day of tech week, something clicked in his mind. “I was thinking, I graduate college on Dec. 6 and don’t start work until the 23rd of January. Being the deck crew member would allow me to fill this gap and still have time to move. It was perfect,” says Arencibia. “I knew this was my moment to ask. If I couldn’t ask for this opportunity here—in a place where I knew everyone—how was I going to survive in New York City?”

At the start of “Elf the Musical,” Arencibia had not been behind the stage since his first year at Syracuse University and had not worked such a large production since his junior year of high school. With nervousness and excitement fueling his tenacity, he was ready to be a part of the production as a deck crew member. In this role, Arencibia and five other deck crew members make scene changes and prop handoffs happen.

The first 30 minutes of the show run on a constant rush of adrenaline back stage. In that relatively brief amount of time, the stage transforms from Santa’s workshop to New York City to Macy’s, which leads to a giant number, “Sparklejollytwinklejingley,” where the stage, performers and props all sparkle. Arencibia says learning from the assistant stage managers during tech week on how to create the traffic patterns for all of these stage, prop and costume changes was an incredible learning experience. What took two to three hours to map out, takes two to three minutes during the performances. Arencibia executes those quick-turnaround processes, following the patterns and playing his part in the choreographed chaos. 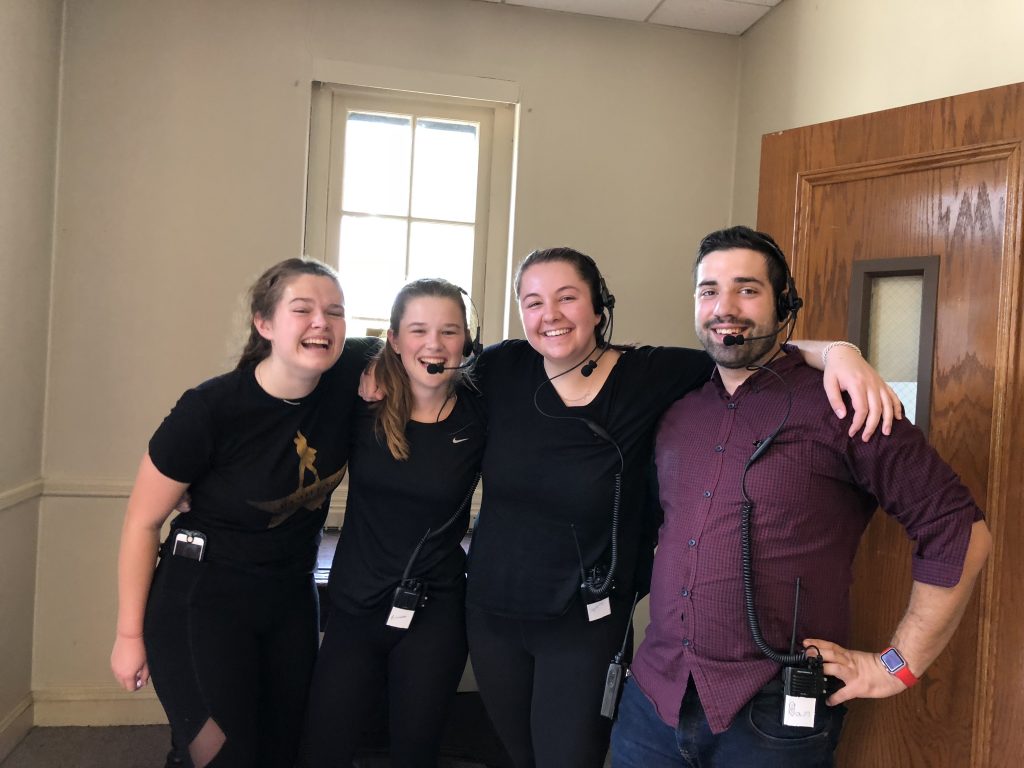 Sam Arencibia with the stage management team at a musical theater camp he helps run.

At one point in the show, Arencibia is responsible for a “hippity hop,” which is a blow-up exercise ball with handles. In his dress blacks and headset, he discreetly stands in a small corner of the stage while holding the hippity hop. Performers run on stage, and Arencibia listens for a loud “BANG!” When the bang sounds, the actors have put something down on the stage, signaling Arencibia to run up the wing with the hippity hop and put it in the correct location. As Arencibia places one hippity hop, an assistant stage manager runs across the stage with another hippity hop to bring it to its end location.

While Arencibia enjoys this adrenaline rush and the experience he is gaining from “Elf the Musical,” he looks forward to the full-time job he starts as a stage manager for Arts Power, a theater company for young audiences, after production wraps up. He will be the principal person who organizes and supervises the production. Being the bridge between creative and technical, Arencibia will be based in New York City and tour the country with “Madeline and the Bad Hat” for five months starting Jan. 23. And so he will begin his career journey as a freelance stage manager.

The preparation for this journey started with an early passion found during his upbringing in Colonia, New Jersey. As a child, Arencibia loved the theater, originally as a performer. Then when given the opportunity to stage manage “The 25th Annual County Spelling Bee” in high school, he knew he had found his path. “I fell in love with working with both the technical and performance sides,” he says. “It was a way to still be in the rehearsal room but also do what I enjoy most: problem-solving and the technical side of theater. I knew then that I wanted to do this the rest of my life!”

But first he was determined to obtain his B.F.A. Given that a limited number of universities offer B.F.A. programs, Syracuse was automatically a finalist on his dream-school list. After learning about VPA’s special relationship with Syracuse Stage, Arencibia knew it was where he wanted to be. 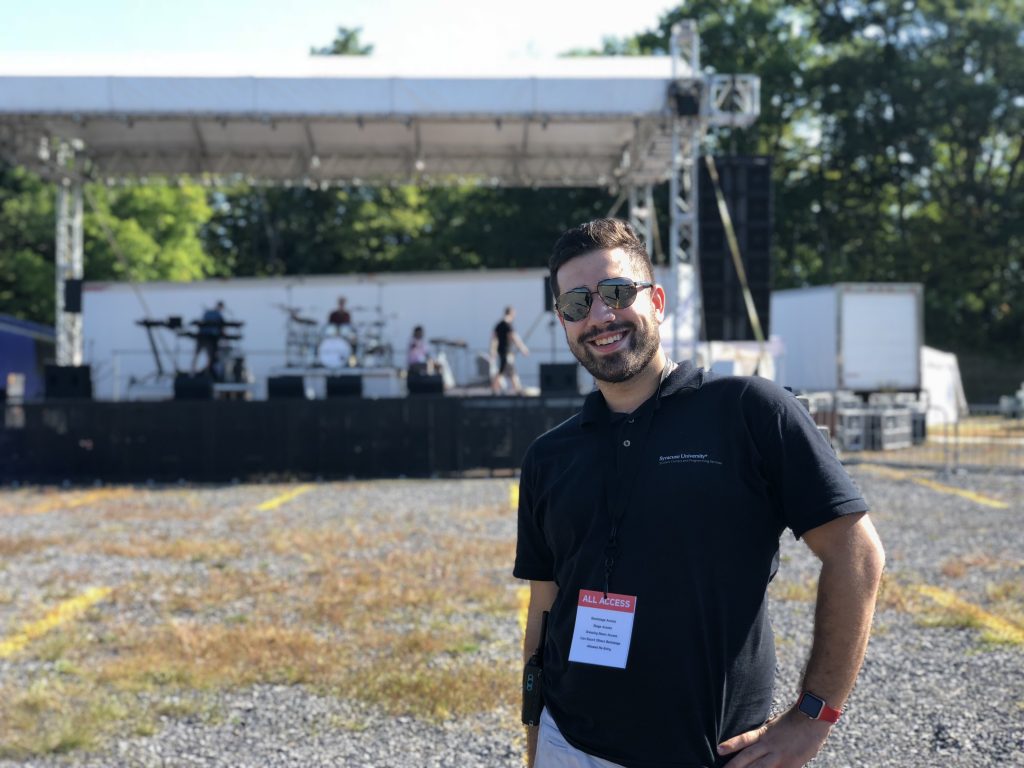 As part of his educational experience, Arencibia last May was the stage manager for the Department of Drama’s production of “Little Shop of Horrors.” Learning by doing, he took full advantage of the opportunity. While only nine actors appeared in the performance, 12 different people were on headsets behind the scenes and 16 more were crew. And while the director may be in charge of the ship, Arencibia says the stage manager is the one who holds the navigation chart.

When Buschmann walked into a meeting for “Little Shop” last year, he watched Sam steering the ship with confidence. “Sam really demonstrated the initiative, leadership and ability to work with and manage his peers,” says Buschmann. “Showing that kind of maturity as a junior to do those things is really kind of remarkable.”

For the show, the production team had only five weeks instead of six for rehearsal. Arencibia was accustomed to tight deadlines thanks to his on-campus job with the Student Centers and Programming Services’ (SCPS) event and technical services team. It’s common to meet an event organizer not long before an event and have to come up with lighting, sound and staging on the fly.

“Sam is very dedicated,” says Scott Casanova, associate director of SCPS. “Sam has always been one of the first people to volunteer his time to help SCPS staff and improve events. He will often take time ahead of performances to meet with the directors and the students running the performances.”

During his time with SCPS, which he began on the first day of his first year on campus, Arencibia has had the opportunity to work with then-Vice President Joe Biden in the Schine Student Center and with major artists at Juice Jam. This experience had enabled him to broaden his scope of expertise and open up a world of post-graduation possibilities.

“I have spent a lot more time in a lot of different scenarios than many others [in my field] might have. I have done so many events now that when something goes wrong I don’t freak out,” he says. “When something goes wrong, when you’re sliding down a hill, you’re supposed to just release the gas. During my time at SCPS, I have learned to just release the gas.”

This lesson in patience has guided Arencibia during his stage management experience. Throughout a production, if something goes wrong, the stage manager must stay calm and be a problem solver. And he must be patient and supportive. From this blossoms trust between the stage manager and the production staff, and the choreographed disarray of backstage takes form to provide the audience with a seamless display of art on stage.