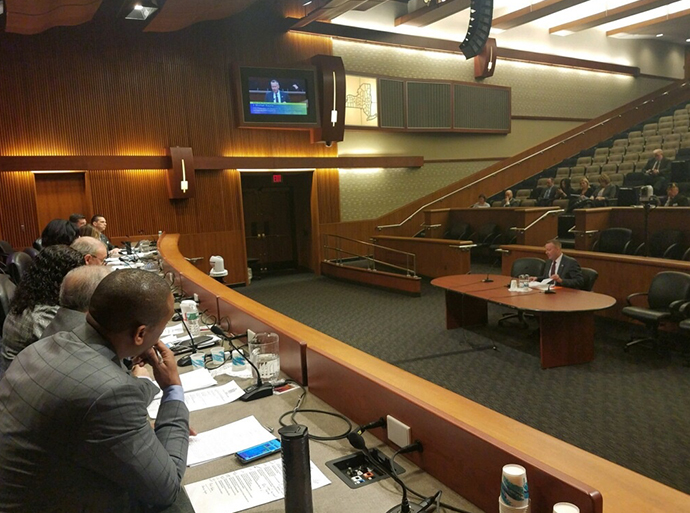 J. Michael Haynie testified Dec. 12 before the New York State Assembly Committee on Veterans’ Affairs and Subcommittee on Women Veterans at the State Capitol in Albany.

On Wednesday, J. Michael Haynie, vice chancellor, and executive director and founder of the Institute for Veterans and Military Families, testified before the New York State Assembly Committee on Veterans’ Affairs and Subcommittee on Women Veterans at the State Capitol in Albany.

Haynie was invited to testify by Assemblymember Pamela J. Hunter who represents the 128th Assembly District, which includes parts of Syracuse University. Hunter is a U.S. Army veteran, honorably discharged with a commendation medal and two achievement medals. Hunter is chair of the Assembly Subcommittee on Women Veterans.

Haynie was asked by the committees to testify on the topic of veteran unemployment—with a specific focus on the effectiveness of employment programs that assist transitioning servicemen and women obtain gainful employment following their military discharge.

He began by recognizing that Sept. 12 of this year marked a dubious milestone in the story of our nation’s longest sustained period of military conflict. Specifically, Haynie noted Sept. 12, 2018, represented the date upon which an American citizen born after 9/11 could enlist in the U.S. military, and subsequently join the more than four million Americans who have shouldered the burden of America’s post-9/11 wars. In this regard, Haynie said, “it’s important to recognize that our post-9/11 wars represent the first sustained conflict in U.S. history, to be carried out by a military composed entirely of volunteers.”

Undergirding this fact, Haynie told the committee that the most critical assumption of our current all-volunteer military and the narrative central to most military recruiting campaigns “is the proposition that voluntary military service will create and accelerate pathways to civilian jobs and careers. In fact, post-service employment ranks among the most pressing concerns expressed by military members, veterans and their families. This is because for many Americans military service stands out as one of the last accessible pathways to socioeconomic mobility.”

“Given this fact,” Haynie said, “after 17 years of sustained war, has the nation—and New York State—delivered on the ‘promise’ that military service experience aligns with and enhances employment opportunities after service?”

Haynie testified the story told by data suggests that throughout much of the past decade, the rate of unemployment experienced by veterans has exceeded that of the non-veteran population. In some cases—for the youngest veterans, Native American veterans, women veterans and those with disabilities—the differences have been extreme.

“In November, the Military Times—the most influential publication in the military community—named Syracuse University the #1 ranked private university in America for veterans,” Haynie testified. “We’ve opened our doors widely to the nation’s veterans, and today count almost 1,300 military-connected students. Next year, Syracuse University will open the National Veterans Resource Center, a state-of-the-art facility that will serve as a center of excellence for the State and the nation, related to advancing the social, economic, and wellness concerns of veterans and their families.”

“In that regard, I’d like to acknowledge Governor Cuomo and the Legislature, for supporting this groundbreaking project, Haynie said. “The National Veterans Resource Center is one-of-a-kind facility in America, and represents a project that will distinguish New York State.”

In closing, Haynie urged that New Yorkers “take the initiative to ensure that New York State’s veterans and military families are empowered to act on the American Dream that they defend while in uniform. This, is our moral obligation.”

A copy of Haynie’s complete testimony is available to review.