ITS Staff Member Builds Beds for Families in Need

Jon Wright doesn’t particularly consider himself a woodworker. But his skills—and those of his close knit group of friends—have created beloved pieces of furniture for many delighted young people in the community. 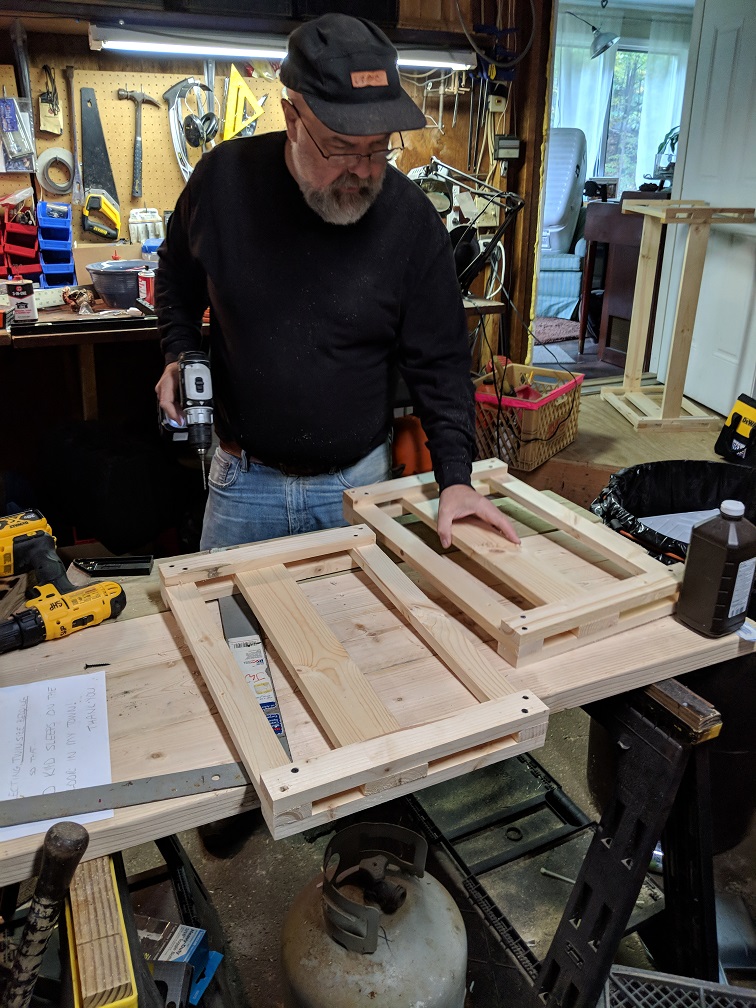 Jon Wright, a support analyst with the University’s Information Technology Services, is a founding member and co-president of the local chapter of the nonprofit organization Sleep in Heavenly Peace. In this photo, he’s working on a mini bunk bed.

Wright, a support analyst with the University’s Information Technology Services (ITS), is a founding member and co-president of the local chapter of the nonprofit organization Sleep in Heavenly Peace. The national organization’s mission is to make sure no kid sleeps on the floor by providing handmade beds.

“We build beds, and we donate them to kids who are sleeping on the floor,” Wright says.

The group members build the headboard, cut the appropriate lengths of side boards and rails, sand the components and then set up the bed with a shrink-wrapped mattress on site.

Wright is joined by co-president Chris Hussak and a core group of seven couples, with an additional group of about 10 others. The group was also recently joined by another SU employee, Jeff Pitt, director of information technology for the College of Arts and Sciences computing group, whom Wright shared information with about the group while the two were speaking at work one day.

“He came to a build, and he got the bug,” Wright says. “He’s a tremendous asset.” Pitt also put together a request to the Jim and Juli Boeheim Foundation for a $5,000 grant that was recently awarded to the chapter to help fund materials.

Wright, who has been with the University for 22 years, works at the ITS Central Help Desk, assisting students and other members of the University community with technical issues and troubleshooting hardware and software problems. It’s a position in which he enjoys helping others solve problems—a feeling that extends into the work he does with Sleep in Heavenly Peace. 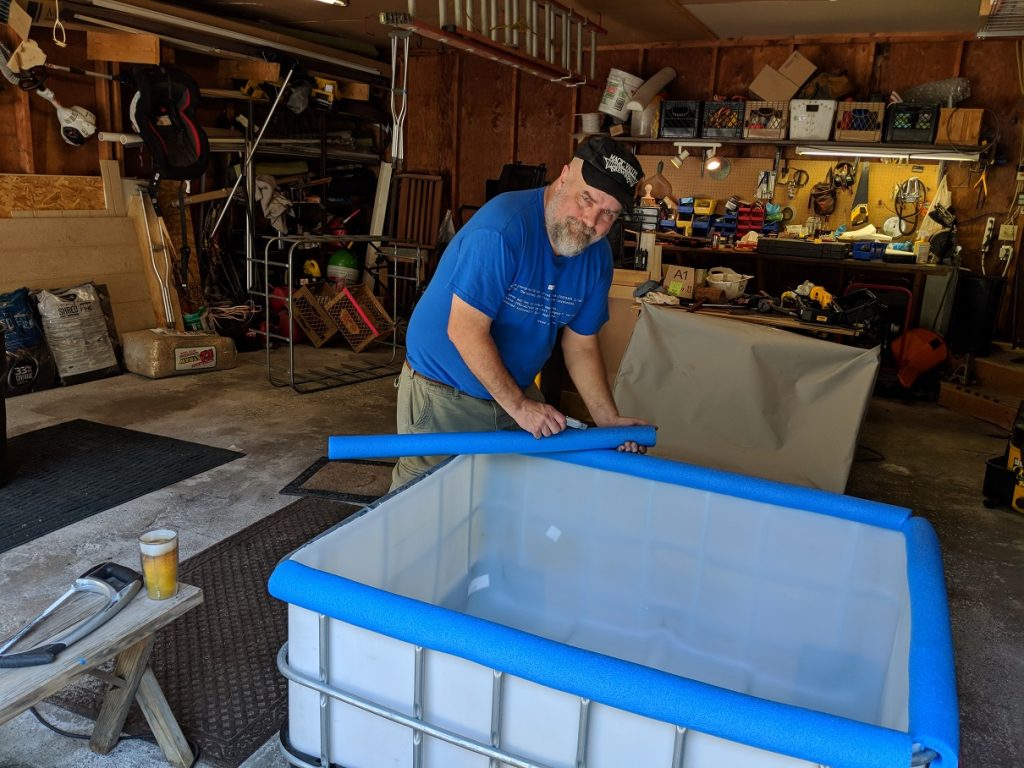 Jon Wright, co-president of the local chapter of Sleep in Heavenly Peace, works on a dip tank for staining wood.

Read more about how Wright became interested in the organization and what’s next.

Q: How did you get involved and get the local chapter going?

A: This past May, a few Syracuse area friends met to discuss a shared desire to make a difference in Syracuse and Onondaga County. One of these friends mentioned a Facebook program called Returning the Favor and an episode featuring Luke Mickelson. Luke, after realizing that there were children sleeping on the floor in his town, decided he needed to do something and from that decision Sleep In Heavenly Peace (SHP) was born. After watching the program the next time they got together, it was unanimous—let’s do this in Syracuse. By the end of July, the group was officially the first SHP chapter in New York state.

Q: How many beds have been built? Where do you build them?

A: Locally, we have built 35 beds so far. We hope to deliver 80 beds before Jan. 1. We partner with corporations and civic groups to engage the community. We have had build days at the Lowe’s in Clay and at Manlius True Value. We are currently looking for an indoor location to use on Saturday or Sunday mornings to do public builds during the winter months. We are always looking for companies or groups that would like to sponsor and do a bed build as a charitable team-building activity. A private build took place at Hillbrook Juvenile Detention Center, where we worked with the teen residents to impart some trade skills, as well as provide an opportunity to give back to their community.

Q: How many have you delivered? Who do they go to?

A: We have delivered 32 of the 35 beds so far. The beds go to children between the ages of 4-17 who are sleeping on the floor, a mattress on the floor or a couch, or are in situations where multiple children are in a single bed. All requests for families in need are made through the national organization web page and are vetted locally. We generally work through the list but will prioritize for certain circumstances, such as keeping a family together if possible by providing beds quickly. 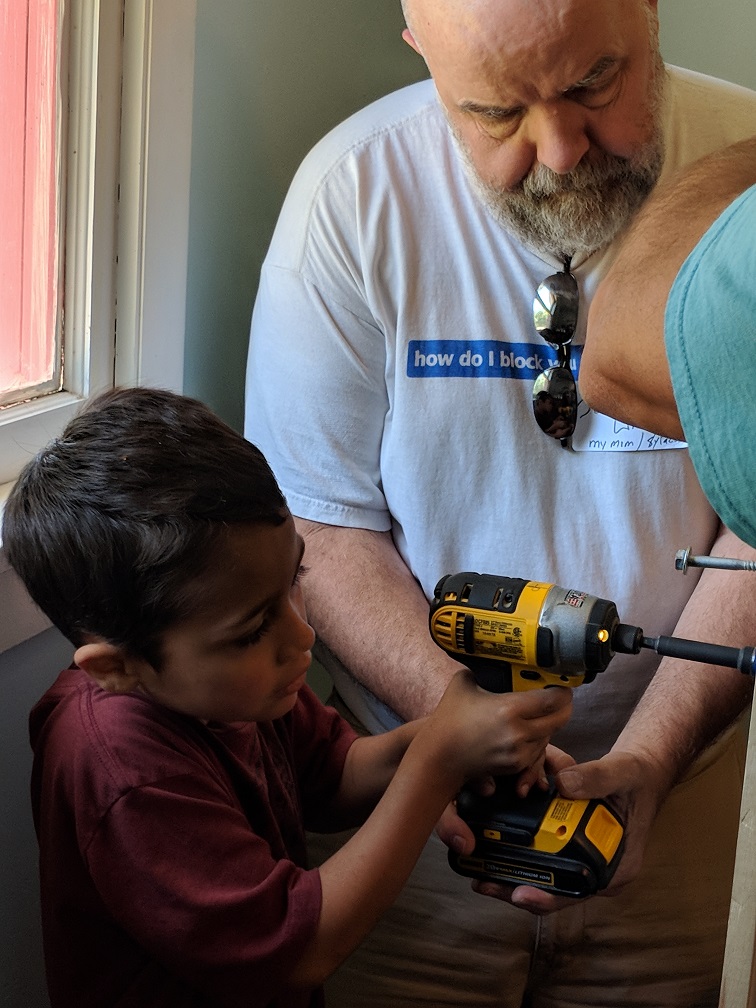 Jon Wright assists a boy with a power tool during a build in Idaho as part of a training for Sleep in Heavenly Peace. Wright is co-president of the Syracuse chapter, which he started with a group of friends earlier this year.

Q: How long have you been woodworking? How did you get started?

A: I’m not a woodworker in my eyes. I’ve always had a knack for almost any project I took on but I actually prefer electrical work or plumbing to woodwork. The beds we build are pretty basic and, while it takes some skill with hand tools, almost anybody can do it. They are built to be sturdy, workhorse, long-lasting beds.

Q: Why is this important to you?

A: When I first heard of this, I was skeptical. My oldest daughter worked in the city for a time as a paramedic, so I asked her if kids were sleeping on the floor. Her confirmation that it was widespread broke my heart. It is such a simple thing. I am also a man of faith and believe we are put on Earth for a purpose. The way that purpose is carried out changes in different stages of life. Right now, I am at a place where this is my passion to get as many kids off the floor, off a couch, as I can.

The drive home after delivering our first bed was a bittersweet experience. There’s a ton of emotions. You are happy that you left a bed, but you leave wishing you could do more.

Q: You also served as a volunteer firefighter. How long were you a firefighter? What does that mean to you to serve your community?

A: I “retired” from the Manlius Fire Department last January, when I turned 60. I had spent 10 years volunteering as an ambulance driver in Manlius. I was lucky to serve with two of my children who were paramedic firefighters there at the time. There is nothing better than serving others, particularly if you can do so with purpose that is as devoid of self-interest as is achievable.

Staff Spotlight shines a light on many of Syracuse University’s most dedicated—and talented—members. Their work on campus. Their often very interesting lives away from campus. It is our pleasure to share their stories. Know someone who should be considered for an upcoming Staff Spotlight? Contact Kevin Morrow, director of internal communications in the Division of Marketing and Communications, at kdmorrow@syr.edu.