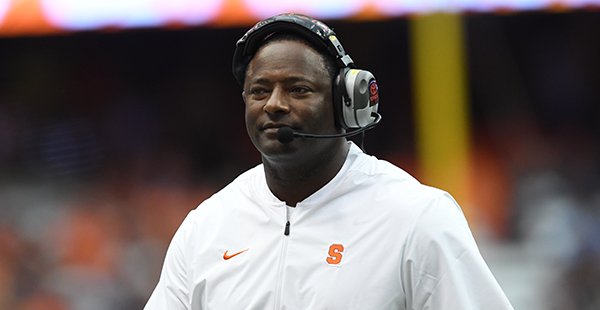 “A little over three years ago, I arrived at Syracuse University inspired by the great opportunity to coach at an institution with such a rich football legacy, hungry student-athletes, good facilities and a storied tradition of academic distinction,” says Babers. “It was a true honor to have accepted the head coach position then, and I consider it a privilege today to be able to extend my time coaching at Syracuse University. I am grateful to have the support, faith and trust of University leaders, the Orange community, our student-athletes and our fans. I am excited about what the future holds for Syracuse Football and look forward to our continued improvement and growth.”

Under Babers’ leadership, Syracuse Football has experienced great success—both on and off the field. In fact, many are calling the 2018 season a breakthrough year for Babers and his team.

The Orange finished the regular season 9-3, undefeated in the Dome, and is headed to the Camping World Bowl, where it will take on No. 15 West Virginia University. At one point, the Orange ranked as high as No. 12 in both the Associated Press Top 25 and Amway Coaches’ Poll. The team, which appeared in all six releases of the College Football Playoff rankings, is seeking just the seventh 10-win season in school history. Additionally, the team racked up several individual honors, including Babers being named the ACC’s co-coach of the year by the Associated Press and redshirt freshman Andre Szmyt becoming the first Syracuse kicker to win the Lou Groza Award, the highest honor for placekickers.

“Dino has led an exhilarating resurgence of football tradition at Syracuse University,” says John Wildhack, director of athletics. “On the field and off the field, Dino has demonstrated his deep commitment to our football program, our student-athletes, our communities and our fans. Not only is he an incredible leader, coach and mentor with great integrity and heart, he is also a tremendous ambassador for Syracuse University and the broader Central New York community.”

Chancellor Kent Syverud, who in 2015 called Babers the best person for the job, says he continues to be impressed with the coach’s character, vision for the program and commitment to excellence.

“Dino’s energy—both on and off the field—is palpable, and his impact on Syracuse Football, and in particular on the student-athletes he coaches, has been nothing short of extraordinary,” says Chancellor Syverud. “Syracuse University is proud to have Dino leading Syracuse Football. I am confident we will continue to see great things from him, his staff and our student-athletes.”

Babers, who was named the 30th head football coach at Syracuse University in 2015, says while he appreciates the confidence he has received from many in the Orange community, there is still a lot of important work ahead to build a perennially competitive Power Five program.

“I couldn’t be more proud of the work our guys have done—in the classroom, on the field and in the weight room. Their dedication, grit and perseverance got us to where we are today. Now, we need to focus on where we want to go and how we get there. This is only the beginning,” Babers adds.

About Syracuse University
Syracuse University is a private, international research university with distinctive academics, diversely unique offerings and an undeniable spirit. Located in the geographic heart of New York state, with a global footprint, and nearly 150 years of history, Syracuse University offers a quintessential college experience. The scope of Syracuse University is a testament to its strengths: a pioneering history dating back to 1870; a choice of more than 200 majors and 100 minors offered through 13 schools and colleges; nearly 15,000 undergraduates and 5,000 graduate students; more than a quarter of a million alumni in 160 countries; and a student population from all 50 U.S. states and 123 countries. For more information, visit syracuse.edu.