As an intern at an Austrian music festival, musicologist Ingeborg Zechner was asked to write a program description about one of the pieces played, the Carmen Fantasie. The well-known violin piece was penned by Franz Waxman, a composer best known for his film scores. Despite Waxman’s 12 nominations and two Oscars for movie composing, Zechner could find surprisingly little information on the German-born composer. 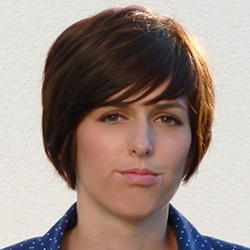 Waxman’s filmography includes scores for more than 40 films, including classics such as “The Invisible Man,” “Flash Gordon,” “The Philadelphia Story,” “Dr. Jekyll and Mr. Hyde,” “Sunset Boulevard,” “Peyton Place” and “A Place in the Sun.”

The composer has turned into a major research project for Zechner, who received her doctorate in historical musicology from the University of Graz in 2014 with a dissertation about London’s Italian opera business in the 19th century. She’s spending fall semester as a Fulbright Visiting Scholar in the College of Arts and Sciences’ Department of Art and Music Histories, studying a collection of Waxman’s papers housed in the SU Special Collections.

The papers—some 200 boxes—span from film scores written in France and Germany during the 1930s before Waxman immigrated to the United States through his Hollywood career and tenure as artistic director of the Los Angeles Music Festival, to his death in 1967 at age 60. “Normally, on a research trip you only have a week or two at an archive,” says Zechner. “The Fulbright grant allows me the luxurious situation of being able to browse and explore and see what the material can offer me.”

Zechner says SU’s ownership of the Waxman papers is a story in itself.  Under a directive from Chancellor William P. Tolley in the early 1960s to build Syracuse University’s Special Collections, Martin H. Bush, deputy administrator of manuscripts, wrote letters to prominent artists, architects, writers and musicians of the day asking for their papers. Waxman complied, giving perpetuity and academic purpose to his lifetime work. Zechner says the collection is providing an excellent foundation for her research, which will continue in California, Germany, Italy, and France, pending grant funding.

The multi-year project is, in essence, Zechner’s “second dissertation,” required in the Austrian-German academic system to be hired for a professorship. “After you earn your Ph.D., you have to establish an entirely new research area for yourself and write a second monograph in this new field,” she explains.

Zechner says her research on Waxman is not entirely divorced from her background as an opera scholar. “Both opera and film have inter-textual layers with different media involved with the musical score providing a relation between the music and the narrative. In opera, it’s the staging, and in movies, it’s the picture track,” she says.

In November, Zechner made a presentation on her Waxman research to faculty in the Department of Art and Music Histories. “I was able to show some of the material from the collection to faculty members from department and share my findings,” she says. “They’ve been welcoming colleagues who offer a great deal of interaction, so I’m not spending all my time alone in the archive.”