For hundreds of years, the fundamental mechanism of cleaning your teeth through physical brushing has not changed very much—just variations of toothbrushes with bristles. Tairan Li and Chao Huang, industrial and interaction design majors in the College of Visual and Performing Arts’ (VPA) School of Design, had an idea to modernize the age-old process: starting from the six-week Invent@SU challenge in summer 2017, they designed, prototyped and pitched a hands-free device called Panacea that cleans all your teeth at once.

“It is in an intensive six weeks, but your effort definitely pays off,” says Li.

The Panacea device gently vibrates teeth to clean them and also whitens at the same time.

“During the days we were coding modeling, rendering and when we got home, we started writing the provisional patents,” Huang says. 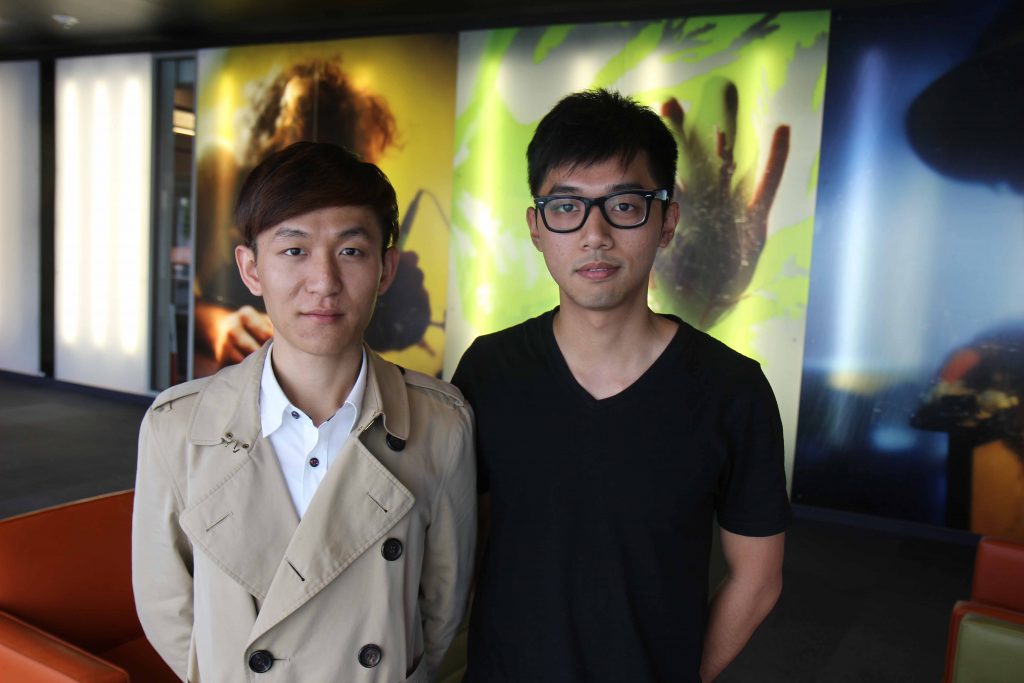 Their device did not win the New York City session of Invent@SU but intrigued several of the judges, including VPA alumnus and entrepreneur Mario Mercado ’99. Mercado reached out to Li and Huang after Invent@SU and recommended they move forward.

“He emailed us and also called us: ‘this product has potential, you can commercialize, set up your own business,’” Huang recalls.

“I saw that they not only had the talent to develop a product, but they also had the ability to build a company,” Mercado says. “As a person who has been through the startup process, and having the battle scars to prove it, I felt that it was my responsibility to help them navigate through some of the landmines of building a product and a startup. Their drive, work ethic, intelligence and trust in each other have been the foundation to the milestones they have achieved.”

“Not only do you have great ideas, but you also have to understand the markets, understand consumers, understand your target audience,” Huang says.

With help from their pitching experience during Invent@SU, Huang and Li connected with venture capitalists who valued their company at $5 million.

“That definitely empowered our persistence and passion to keep this project moving forward,” says Li.

After making connections at the Massachusetts Institute of Technology, Huang and Li decided to establish Panacea’s headquarters near Boston. Just 15 months after Li and Huang first came up with the concept for Panacea, the company has six full-time employees. Huang and Li are still full-time industrial design students at SU but travel to Boston every weekend to assist with the company they founded.

“We use up the weekends. You are supposed to relax. We just use that time to make sure the project is progressing,” Huang says.

“You are living a life for moving this project forward,” says Li.

In addition, they are preparing to establish a Panacea subsidiary company in Hangzhou, China, that will handle most hardware engineering and marketing. Currently, they are doing manufacturing design optimization and plan to have Panacea products in retail packaging in just a few months.

“We are trying to always push the limit to see what stops us,” Li says.

Both say they are grateful for the Invent@SU program that got them started and connected them with faculty and alumni in engineering, computer science, business and law.

“I also feel that Invent@SU is a program that prepares students to be career ready,” Huang says. “A final boost of everything you have learned.”

“This is a very valuable experience,” says Li. “Being a student at this time and having resources from many fields at SU to back us up really let us focus on the pure project idea, the invention alone.”

Panacea is one of several Invent@SU teams to advance their project into a startup business. Kayla Simon ’19 and Elizabeth Tarangelo ’19 developed a wearable asthma inhaler that won the Panasci Business Plan competition and the Syracuse University ACC InVenture Prize competition and has been accepted into the Medical Device Innovation Challenge. Charles Keppler ’18 and Serena Omo-Lamai ’20 advanced to the international finals of the James Dyson award with their microfiber filter invention. The wearable IV device invented by industrial design students Quinn King ’20 and Alec Gillinder ’20 was accepted to the “Concept to Commercialization” boot camp at the CNY Biotech Accelerator. The program fosters innovative and entrepreneurial thinking in every participant and has proven to be a springboard to success for many.