So far, the initiative has helped the city to recoup more than $1.4 million in overdue property taxes, and hundreds of additional properties were prompted to get current on their bills—preventing more costly and troublesome outcomes for both the owner and the city alike. Furthermore, the project has established a costless change to city tax collection processes that has the potential to produce benefits for years to come. 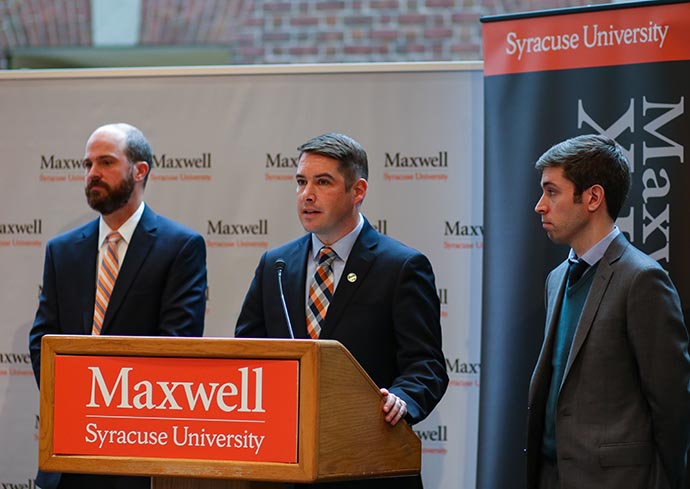 “Tax delinquency that can lead to home foreclosure creates a bleaker outlook for everyone involved—resident families, the neighborhood and the city,” says Professor Leonard Lopoo, director of the Center for Policy Research, co-founder of X Lab and an expert on child and family policy. “For example, we know from the research literature that having a stable home and neighborhood is incredibly important for child development, particularly among low-income children. Frequent moves that might include new home environments and different schools make learning more difficult.”

With funding from the Allyn Family Foundation and in-kind support from Maxwell’s Center for Policy Research, X Lab and the city teamed up to develop an effective outreach strategy to communicate to owners who had fallen behind how potentially serious their situation was and to convey how easy it was to resolve it.

“This partnership with X Lab helps both the city and our residents. It’s the kind of positive outcomes that occur when you aren’t afraid to innovate and try something new,” says Syracuse Mayor Ben Walsh. “By using evidence and data to improve government services, processes and initiatives, we are helping to balance the budget while at the same time improving the health and well-being of our citizens.”

Working with First Deputy Commissioner of Finance Martha Maywalt, the X Lab team developed an array of message options designed to spur owners to take steps toward getting current on their tax bills. “It should be clear in a few seconds what someone’s asking you to do; otherwise, you’re going to give up,” says Joseph Boskovski M.P.A.’14, X Lab co-founder and managing director, of the redesigned notifications.

The team then conducted randomized controlled trials to evaluate the different messages and communications techniques to determine whether—and which—messages did a better job of improving outcomes. In total, courtesy letters were sent to 3,844 owners who were either delinquent on tax bills before 2017-18 and/or late on their current tax bills. An additional 1,922 owners were in the control group and were not sent courtesy letters in order to allow the researchers to compare outcomes.

“Too often, we find that governments and agencies design systems based on the way they think people will respond. We partner with public institutions and nonprofit organizations to test and build evidence for policies and programs based on the way they actually respond—and this improves outcomes for both sides,” says Boskovski. “For example, we know that some people do not respond to government communications because they are not receiving the message—it may be lost among the ‘junk’ mail—or it is too difficult to comply with the process.”

These tests provided concrete evidence about which changes are most effective while helping the city recoup at least $1.47 million in overdue property taxes. These changes will continue to benefit the city as outreach continues not only to property owners who did not receive courtesy letters this year but also to people who fall behind in future years. What’s more, a previous project for the city that focused on owners who had already entered the foreclosure process prompted nearly $100,000 in payments and helped to keep those families in their homes.

“While the dollars matter, what matters more in our view is the trend that they represent—property owners empowered with information and taking appropriate action to protect their properties, secure their investments and strengthen their neighborhoods,” says Meg O’Connell, executive director of the Allyn Family Foundation, which helped fund the initiative. “And since all of the insights developed for the project will remain with the city, the opportunity for this trend to continue is open-ended.”