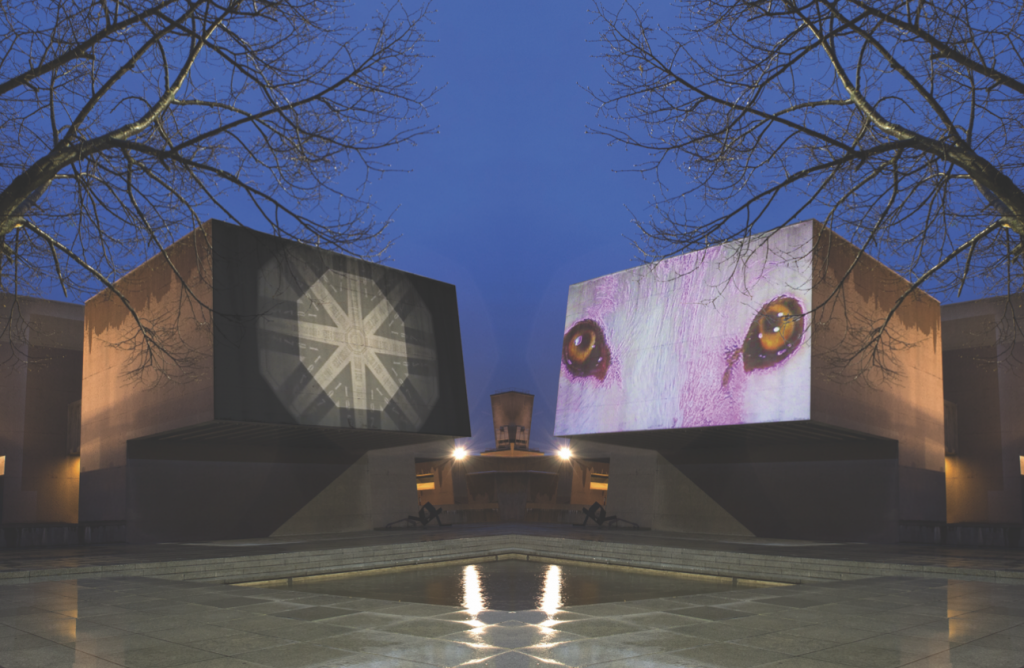 Image courtesy of Light Work UVP: (right to left) Emanuel Almborg’s “Every Crack Is a Symbol” and Crystal Z Campbell’s “On the Way to the Moon, We Discovered the Earth.”

In conjunction with the exhibition, an indoor screening + Q&A with Almborg and Campbell will take place at Light Work’s Watson Theater on Thursday, Nov. 29, from 6:30-8:30 p.m. This event will feature additional work and a conversation with Emanuel Carter Jr., a faculty member at SNUY-ESF; Lanessa Chaplin, project counsel for the Central New York chapter of NYCLU; and Yusuf Abdul Qadir, director of the CNY Chapter of NYCLU, exploring how issues conveyed in the exhibition relate to Syracuse’s own history and legacy of urban renewal. A reception will follow.

The auditorium is wheelchair accessible, and CART services are available by reservation (by Nov. 14) by calling 315.443.1369 or emailing info@urbanvideoproject.com.

Also, on Nov. 16, during the Everson Museum’s free Third Thursday event, Anneka Herre, UVP director and instructor in the Department of Transmedia in the College of Visual and Performing Arts, will engage with visitors in an open-ended discussion about the works that UVP presents.

About the Artists
Emanuel Almborg is Swedish artist living and working in Stockholm. His research-based work explores themes of collective action, political economy and radical pedagogy, manifesting in a range of practices and media, from moving image and installation-based work to publications to participatory programs. He received his M.F.A. from Goldsmiths University in London and participated in the Whitney Independent Study Program. He has exhibited internationally, including shows at Gallery 400 (Chicago), Gasworks (London), Konsthall C (Stockholm, Sweden), Participant Inc. (New York City) and Whitechapel Gallery (London).

“Every Crack is a Symbol (Charlotte Street Project)” is a short film that takes as its starting point two events and two kinds of representation of a South Bronx neighborhood in 1980. The horror film “Wolfen” is about killer wolves living in the ruins of the South Bronx. “People’s Convention” videotaped an attempt to bring together a large coalition of different left social movements and community activists. Both films were shot at the same location, the horror film six months before the protest camp commenced. Both use the urban decay of the South Bronx as backdrop and symbol to generate images, one of demands and radical politics, the other of killer ghost wolves in the ruins of the urban crisis. The horror story of wolves parallels the urban struggles around and against real estate, finance and neo-liberal policies in the early 1980s.

“On the Way to the Moon, We Discovered the Earth” is a historical remix of The New York Times edition printed during the New York City Blackout in 1977, an event unofficially credited as the birth of hip-hop, a movement that was already well underway but advanced with equipment looted during the riots.

“Futures for Failures” is double narrative of failure: architectural and social. Archival footage from a demolition of the Pruitt-Igoe Building in St. Louis manifests that failure. Meanwhile, a voice-over recounts a moment of contagious laughter erupting during a stranger’s funeral. The film is a conversation between the disappeared and the disappearing.

With 35mm film salvaged from a now-demolished black civil rights theater in Brooklyn, “Go-Rilla Means War” is a cinematic parable about gentrification and the intersections of development, cultural preservation and erasure.

About Urban Video Project
Urban Video Project (UVP), a program of Light Work in partnership with the Everson Museum of Art and Onondaga County, is an outdoor architectural projection site dedicated to the public presentation of film, video and moving image arts. It is one of few projects in the United States dedicated to ongoing public projections and adds a new chapter to Central New York’s legacy as one of the birthplaces of video art, using cutting-edge technology to bring art of the highest caliber to Syracuse.