Department of Drama Presents ‘Next Fall’ 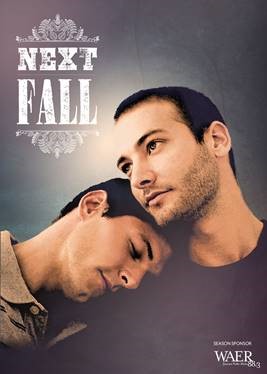 The play runs Nov. 9-Nov. 17 in the Storch Theatre at the Syracuse Stage/Department of Drama Complex. Opening night is Nov. 10.

“Next Fall” unfolds at an intersection of faith, family and sexuality. The love between two gay men, Luke and Adam, frames the story. Theirs is a complex and layered relationship—one is a devout Evangelical Christian and the other a ﬁrm atheist. When a car accident places Luke in critical condition and he lies comatose, suspended between life and death, his loved ones and friends begin reckoning with the conflicting stories of his life, the silences and secrets that have kept this vibrant young man from integrating his present and his past.

“Next Fall” takes the measure of a painful passage and shapes a drama that speaks in a quiet voice of momentous things. With surprising humor and genuine compassion, Nauffts challenges the audience to reconsider conceptions and assumptions about the people depicted in the play and those residing beyond the theater walls. It is, first and foremost, a story of regular people, flawed but appealing, caught up in the disorienting chaos of sudden tragedy.

Zito says that in selecting this play he looked for a piece that placed gay characters at the forefront of the story in a way that was not simply a celebration of being gay. Rather, he sought a story about gay people grappling with a wide variety of issues, including the additional obstacles their sexuality adds. Within a season he refers to as “a season of storytelling,” “Next Fall” invites consideration of the power and limits of beliefs, love and identity.

A successful off-Broadway run brought “Next Fall” and its original cast to Broadway where it premiered on March 11, 2010. Positive reception from audience members and critics alike preceded nominations for Tony and Drama Desk Awards. New York Times critic Ben Brantley called “Next Fall” an “artful, thoughtful and very moving story.”

Zito adds that he is “surprised by how personally affected [he has] been by the events and themes in the play.” He says it takes him back to the New York City he lived in during his early adult years, which has infused his direction of the show with an urban edge perfectly suited to the play’s contemporary voice and snappy humor.

Faith and Sexuality: Resolving and Living with the Conflicts
A panel discussion and Q&A
Sunday, Nov. 11
4:30 p.m.

The discussion is free and open to the public. No tickets are required.

For an accommodations request, contact Zito at rzito@syr.edu or 315.443.2669 one week prior to the event.